As even now Dragon Ball continues to become an increasingly global phenomenon with fans all around the world, there are those who have turned their passion into a profession and become involved with the production of the series itself. What kind of work are these diehard fans doing? And how did they fall in love with Dragon Ball in the first place? In this interview series, we'll hear their stories to try to get to the bottom of these questions and more!

First up is Florence Jay Dominguito, currently working at Toei Animation Philippines. Since first joining the company in 2011, Florence has been involved with all sorts of works in the Dragon Ball series. Let's jump right in! 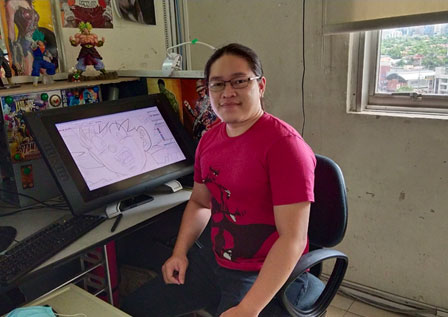 Dreaming to Be an Animator Since 16

——Can you tell us a bit about your work?

I've been doing what are known as the animation "in-betweens" for Toei Animation Philippines since 2007. In-betweens are the frames that connect "key animations", the main drawings of an animation, to give movement to the characters. I also check the in-betweens drawn by other artists. That role involves checking to make sure the animation is drawn well and doesn't contain any mistakes.

——What do you enjoy about your role as an in-between checker?

I've loved the Dragon Ball series ever since I was a kid, so being able to check over the animation in-betweens for a show I love is, in and of itself, what I enjoy about my job. Having a job like this is more than I ever could have dreamt of. When you work on in-betweens, you typically only get to draw things for and engage with your own projects, but as a checker I can see what everyone else is drawing as well. As a Dragon Ball fan, getting to see these different Dragon Ball scenes makes me so happy.

——Why did you decide to pursue a career in animation?

I grew up drawing nothing except for Dragon Ball, so I've always wanted to be involved with its creation in some way. I learned about Toei Animation Philippines when I was 16, and it became my goal to join the company as an animator. That's when I started studying drawing more seriously. 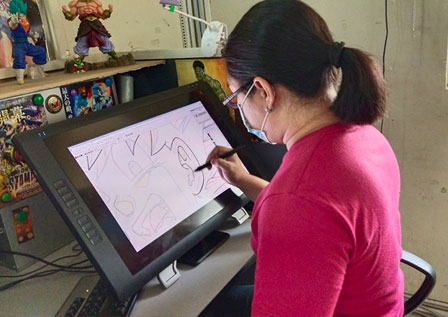 ——How did you first come across Dragon Ball?

I started watching the Dragon Ball anime on television when I was 7. I heard Dragon Ball is only broadcast once a week in Japan, but it's broadcast every day in the Philippines. The broadcast company buys episodes from Japan in batches and plays them back-to-back every day. In between batches of new episodes, they replay old ones. They replay the episodes constantly because Dragon Ball is so popular, and each time I watched them I'd fall more in love with the series. Watching Goku get stronger with every battle made me want to get stronger like him. Goku is a superhero to me.

——Who is your favorite character?

Super Saiyan Goku. I was on the edge of my seat during his battle with Frieza wondering if he'd really go Super Saiyan, so seeing him finally accomplish that was truly amazing. I'll always remember that scene.

——Did you and your friends get excited talking to each other about Dragon Ball?

It was broadcast every night, so the next day we'd always get together and get excited talking about what happened. We also would impersonate Goku and the villains. Everyone would pretend to be Goku and start screaming (laughs). We'd turn completely into Goku and Frieza and say stuff like, "I'm strong!", "No, I'm stronger!". My niece and nephew get just as excited about it now as my friends and I used to.

——Have your feelings about Dragon Ball changed since then?

I'm an adult now, so I enjoy things a little more quietly than I did back then (laughs). I also have a lot of Dragon Ball merchandise. It's hard to find in the Philippines, but there are stores for super fans which specialize in Dragon Ball goods imported from Japan. I bought every single type of UNIQLO collab t-shirt. And it’s not just figures and posters; I also love the Dragon Ball games like "Dragon Ball Z: Kakarot" and "Super Dragon Ball Heroes: World Mission."

——What was it like working on the in-betweens for the "Dragon Ball Super: Broly" movie?

"Dragon Ball Super: Broly" was the first time my name had ever appeared on the end credits of something I'd worked on, so it's a very special movie to me. I was in charge of the in-betweens for the battle scene between Broly and Gogeta.

——That was the climax of the movie! What did the people around you think?

I watched it in theaters, and everyone gasped when that scene was played. I felt so lucky to be able to see their reactions live. Unlike Japan, people in the Philippines get really riled up during movies and like to shout things.

——What are your hopes and ambitions for your career going forward?

I want to work more on Dragon Ball. Also, right now I'm drawing the in-betweens for key animations that are sent to the Philippines from Japan, but in the future I'd like to actually go to Japan and learn from the people drawing those key animations. I want to see them work in person.

——What hopes and expectations do you have for the future of the Dragon Ball franchise?

As a fan, I'm really looking forward to new movies and merchandise. I'm also excited about the new anime that will continue Dragon Ball Super.

It seems that everyone enjoys impersonating Dragon Ball characters, whether in Japan or in the Philippines! We can't wait to see more of these in-betweens drawn with such passion by Florence as he continues living out his dream of working on Dragon Ball.

We were also lucky enough to receive a handwritten message from Florence himself! 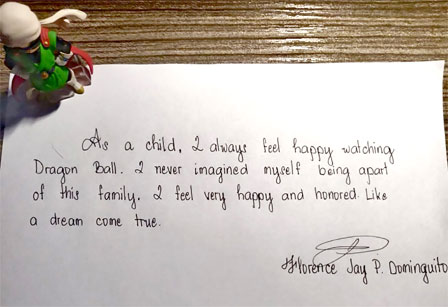 As a child, I always feel happy watching Dragon Ball.
I never imagined myself being apart of this family.
I feel very happy and honored. Like a dream come true.
—Florence Jay P. Dominguito