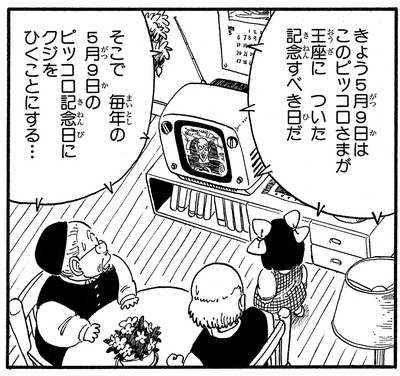 Today is May 9th, which, for the uninitiated, means today marks the auspicious date that Great Demon King Piccolo realized his grand ambition of world domination and ascended the throne as King of Planet Earth: Piccolo Commemoration Day!! It's also the birthday of his offspring, Piccolo. 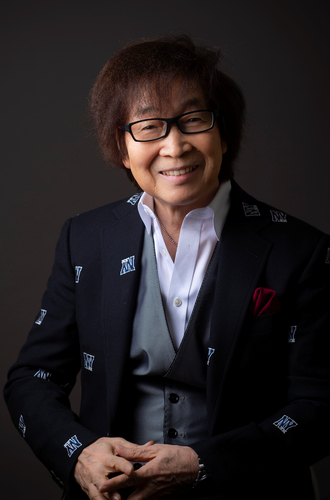 To celebrate, we had the rare honor of interviewing the Japanese voice of Piccolo himself, Mr. Toshio Furukawa! Having lived the role for so many years, few people could claim a more intimate connection to Piccolo than him, and so we took this opportunity to dig into his experiences and ask what he loves about the character! And as a very special treat, Mr. Furukawa was kind enough to create some brand-new Piccolo illustrations just for us that we've included at the end of this article!!

——Have you ever celebrated Piccolo Commemoration Day yourself?

Mr. Furukawa: So, I actually like Piccolo a lot. Whenever someone asks me who my favorite character is, I always answer "Piccolo" without hesitation. I have around 3,000 Piccolo figures, if that gives you an idea of how much I like him. So yes, I do celebrate May 9th—even if it's just eating something nice to mark the occasion. Sometimes I'll also rearrange my figure collection, clean them up, paint them, that kind of thing. 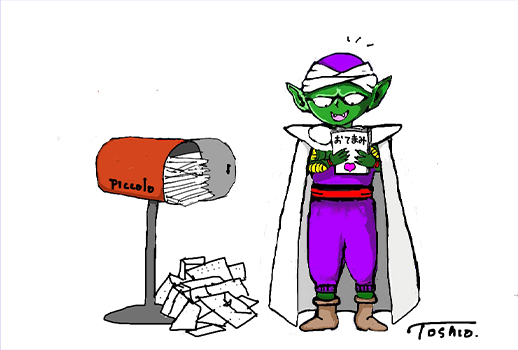 Be sure to check out Mr. Furukawa's Twitter account ＠TOSHIO_FURUKAWA
to see his frequent Piccolo posts and self-drawn Piccolo illustrations! 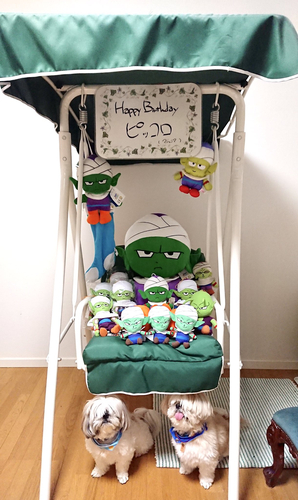 He even made a special happy birthday post for Piccolo
during last year's Piccolo Commemoration Day!

Mr. Furukawa: I collect more than just figures too. Pretty much anything new that comes out, I buy it all. I'll even buy the same things more than once sometimes. I bought that "Super Movie Ticket" for Dragon Ball Super: SUPER HERO too. I'm kind of a geek, you know? I've always had that "collector" gene in me, so I've amassed collections of all kinds of stuff. I'm running out of space to put it all. 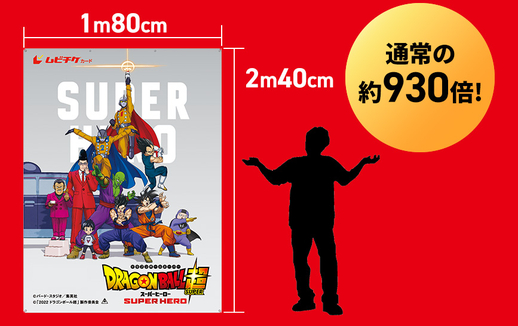 Digital movie tickets with designated seating are available for purchase in Japan.
The "Super Movie Ticket" mentioned by Mr. Furukawa is a physical ticket roughly 930 times the size of a regular ticket!
Standing 2.4 meters tall, it's even bigger than Piccolo!

——Just out of curiosity, have you ever played the actual piccolo instrument?

Mr. Furukawa: I haven't. (laughs) It's that little wind instrument you hold to the side like this, right? I see... Maybe I'll have to give it a try. (laughs) Piccolo's name really is cute when you think about where it came from, isn't it?

Looking Back at Famous Scenes and Recording Shenanigans!

——What would you say is your all-time favorite Piccolo scene?

Mr. Furukawa: Probably the scene where, after building a master-student relationship with Gohan, Piccolo sacrifices himself to save his life. And then when he falls to the ground on the verge of death, with tears in his eyes he opens up to Gohan about the time they spent together. That's my favorite. It's such a moving, memorable scene. 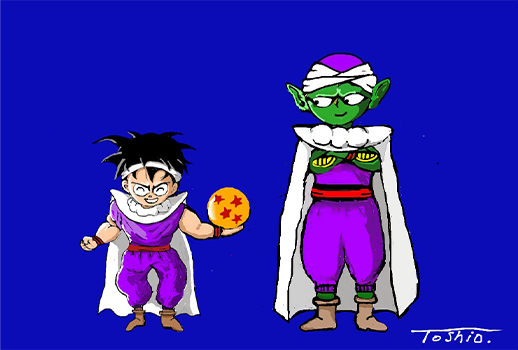 An illustration by Mr. Furukawa
featuring Gohan and Piccolo! 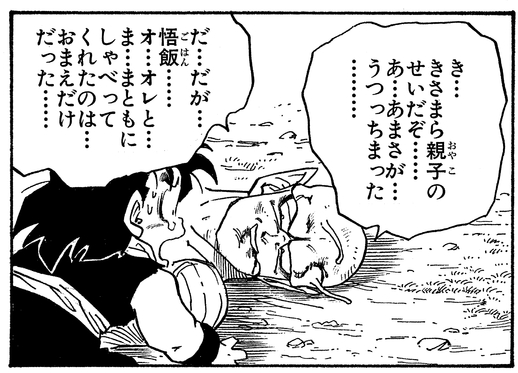 "Dragon Ball" Tale 223
Mr. Furukawa also mentioned being delighted that Piccolo and Gohan
both play such a large role in the upcoming new movie.

——Do you have any stand-out memories from your time recording for the anime?

Mr. Furukawa: Masako Nozawa was the "mood-maker" in the studio, always telling jokes, making the whole thing feel like a group of friends just having a good time.
One of her jokes I remember was during the scenes where Piccolo was training Gohan, she and Joji Yanami would start scolding me, saying, "Stop bullying Gohan!" Joji was good with jokes too, I remember he'd say to me, "Just because you're Furu-kawa doesn't mean you can go full-power! He's just a kid!" And then I'd always apologize like, "I'm sorry! It's just part of my character!" 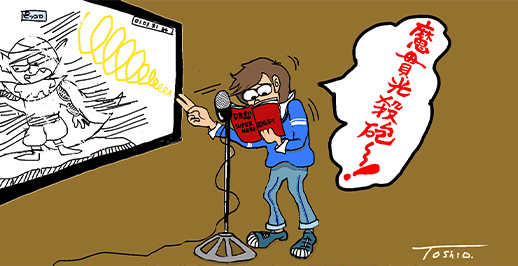 An illustration by Mr. Furukawa
depicting himself recording an anime scene! 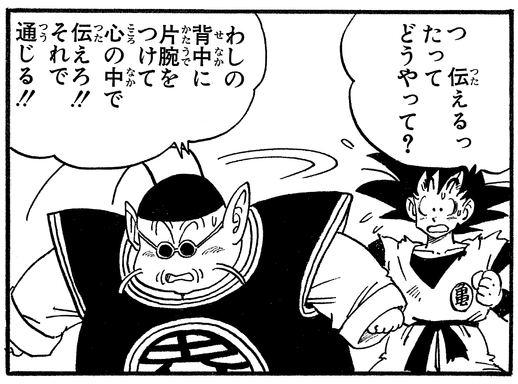 Mr. Furukawa: Other than that, I remember when Junpei Takeguchi was doing the voice for Uranai Baba, he was reading the "Son" kanji in "Son Goku" as one of its other readings, "mago", which means "grandchild". We were laughing so hard at "Mago Goku" in the studio that they had to stop the recording. He wasn't trying to be funny or anything either, he honestly read it as mago, even though up until that point he'd been saying "Son Goku" just fine. For some reason when he turned the page, it suddenly turned into mago. Masako was laughing the hardest. She threw her script up in the air, threw her head back, and started roaring with laughter. She managed to say to him, "Junpei, it's 'Son'! Where did 'mago' come from?" And he just shrugged it off all aloof, like, "Oh, is it really?" That was a funny little incident. 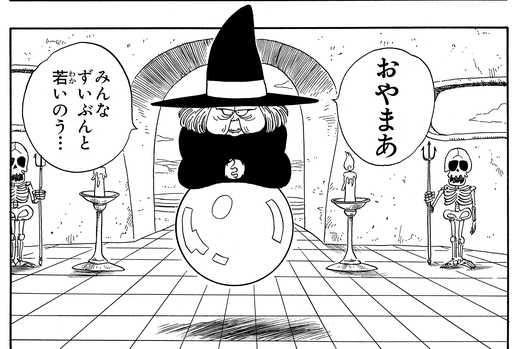 "Dragon Ball" Tale 98
Junpei Takeguchi plays the Japanese anime voice of Uranai Baba.
By the sound of it, the Dragon Ball studio environment was quite jovial!

——The new movie will also feature the first appearance of Piccolo's "potential-unleashed" form. What was your impression of that the first time you saw it?

Mr. Furukawa: I had to retake those parts a few times during recording, actually. The first time we recorded, the visuals were all just line drawings, so I couldn't really tell that he looked any different. Afterward, they added in the colors and I got a better feel for how Piccolo would change, and then we retook the recordings to match that. Piccolo hasn't really had any transformations per say throughout the series, so I was quite happy that he finally got one. Fans were very apt to notice Piccolo's changes too, weren't they? When the second key visual for the movie was released, they were saying things like, "The lines on Piccolo's arms are gone!" and "His belt's a different color!" They really do pay close attention. 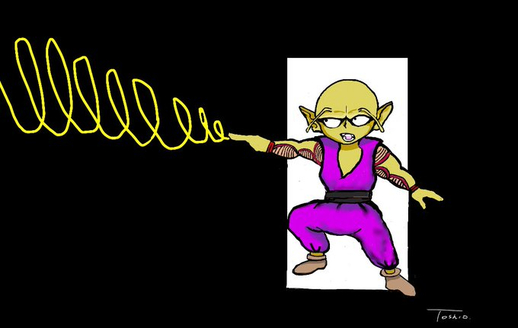 Another of Mr. Furukawa's illustrations.
"Apparently Piccolo will be unleashing his hidden potential in the new movie.
Something like this, maybe?!"

A Message and New Illustrations from Mr. Furukawa!!

——Do you have a message for the fans in celebration of May 9th?

Mr. Furukawa: Dragon Ball is a series with such global popularity that I don't think it'll end any time soon, but if for some reason it did, I think I'll always celebrate May 9th. So, everyone, please keep celebrating with me every year!

——Thank you very much!


And as promised, as a bonus Piccolo Commemoration Day treat, here are the new Piccolo illustrations that Mr. Furukawa drew just for us!! 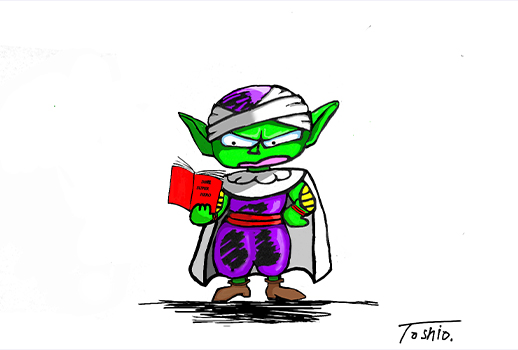 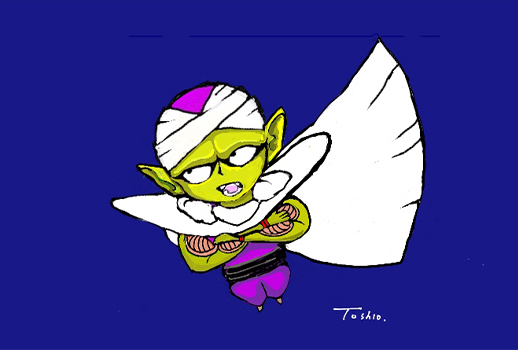 Video footage for part of this interview will also be featured in the Weekly Dragon Ball News! Check it out in the related articles section below!