With the premier of Dragon Ball Super: SUPER HERO set for June 11, the world of Dragon Ball is getting more and more fired up!
Amidst the hype are two super-popular figures—S.H.Figuarts Android 21 (Lab Coat), available for order on the Tamashii Web Store, and the highly anticipated S.H.Figuarts First Form Cell, available for pre-order at participating locations in Japan—which we'll be introducing hot off their photoshoot in this article!

First up, lets' check out the S.H.Figuarts Android 21 (Lab Coat) that's available for order on the Tamashii Web Shop! 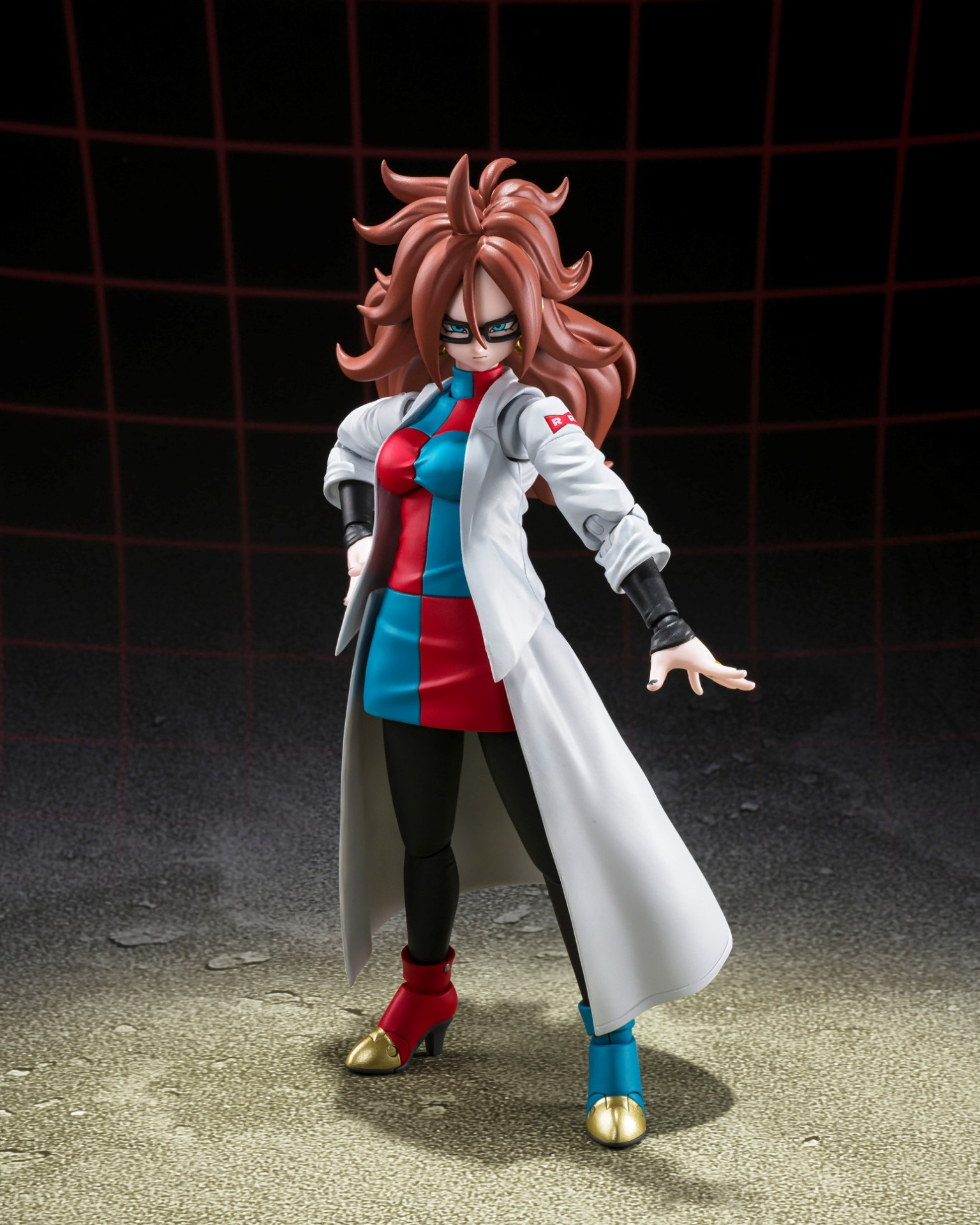 Android 21 (Lab Coat) was announced as a DLC character for Dragon Ball FighterZ during DRAGON BALL Games Battle Hour 2022, a two-day worldwide simultaneous online streaming event held on February 19 & 20, 2022. Android 21 (Lab Coat) strikes a ton of great poses in the game, so S.H.Figuarts made sure to create a figure with enough detail, posability, and swappable parts for fans to recreate them all.

The figure comes with four different swappable facial expression parts that can be used to recreate her mannerisms from the game. In addition to her regular expression that comes pre-attached, she also has glaring, yelling, tooth-clenching, and smirking expression parts. 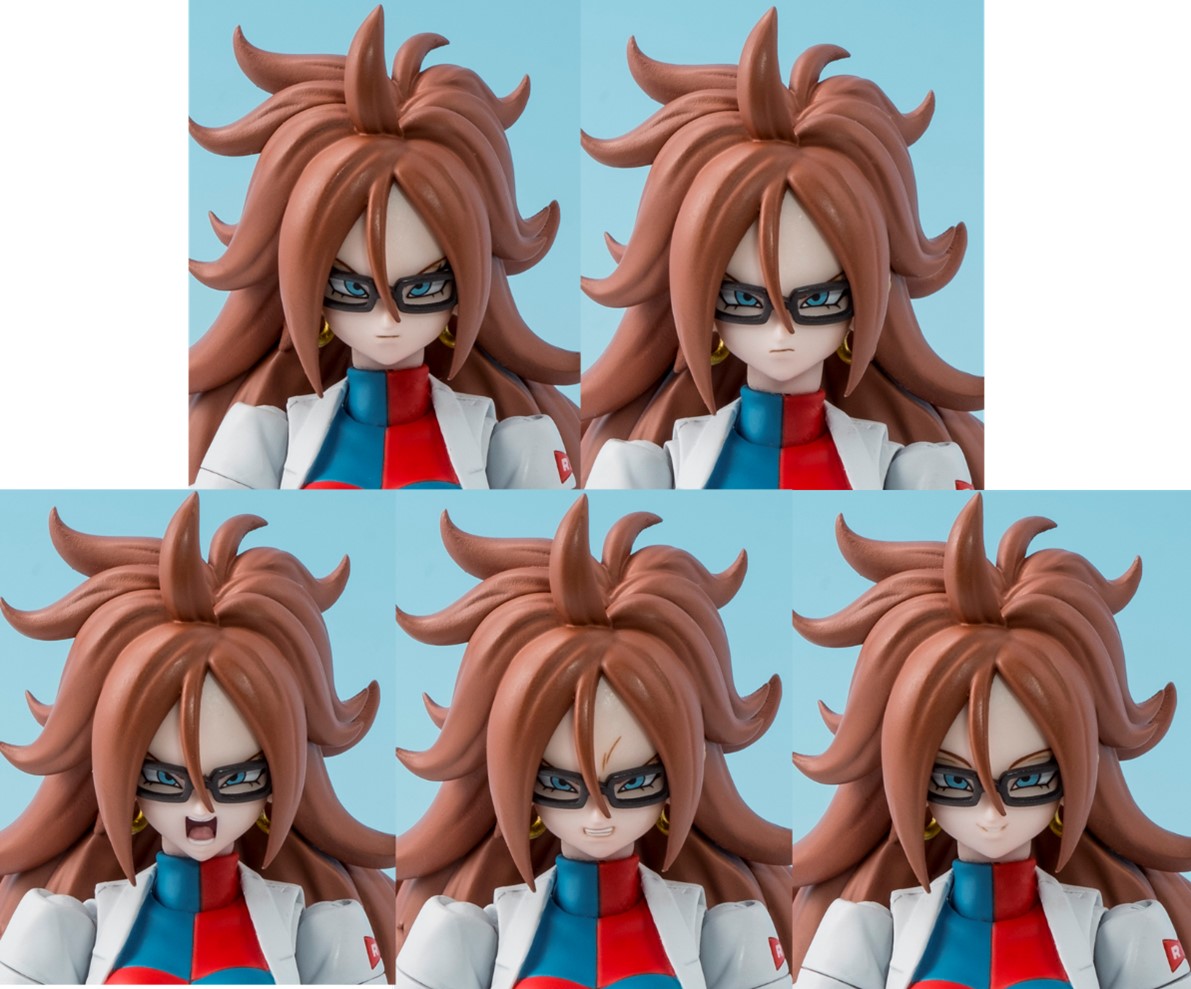 You can also detach and attach her glasses at will, so fans are free to create the look they like the most! 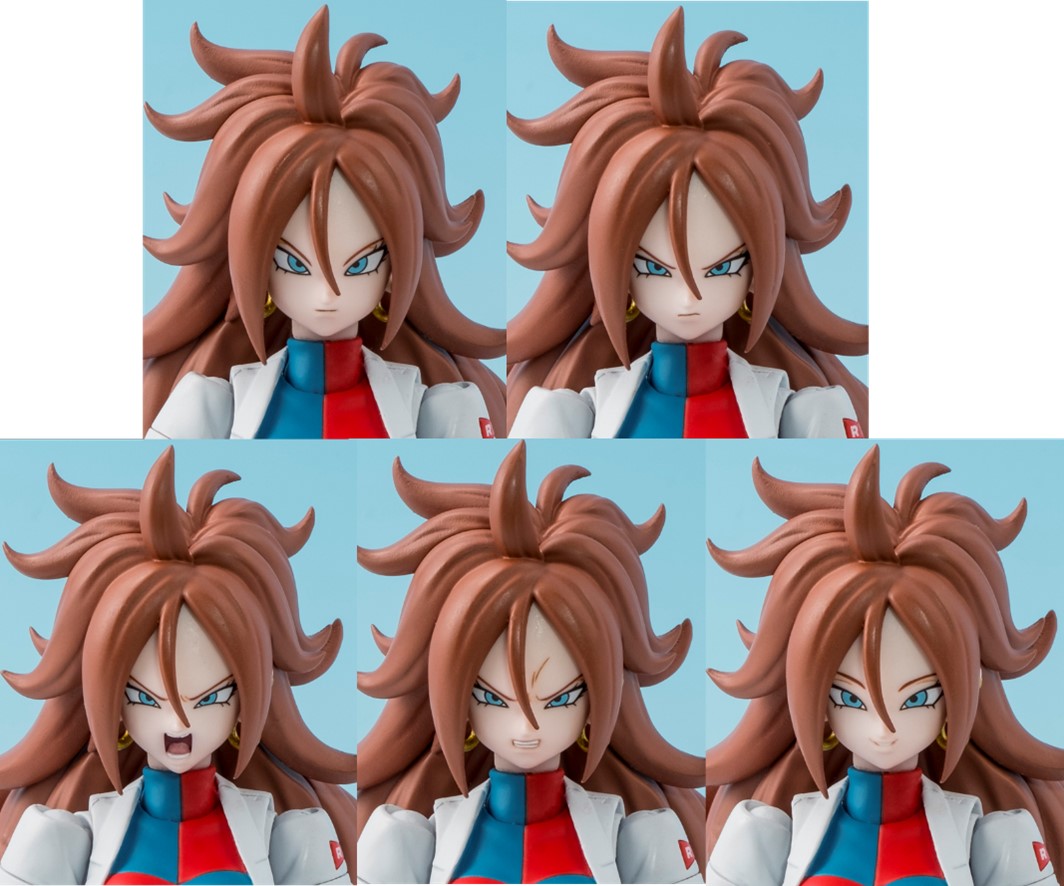 She's got all the mobility you'd expect from the S.H.Figuarts Dragon Ball Series, meaning she's extremely posable.
In addition to the area of her dress under the chest also having built-in mobility, her skirt is made of soft parts so that you can recreate poses where she's bending or crouching.
The left and right shirttails of her lab coat are also partitioned separately, making it possible to position them individually to add an even greater sense of movement to her dynamic poses! 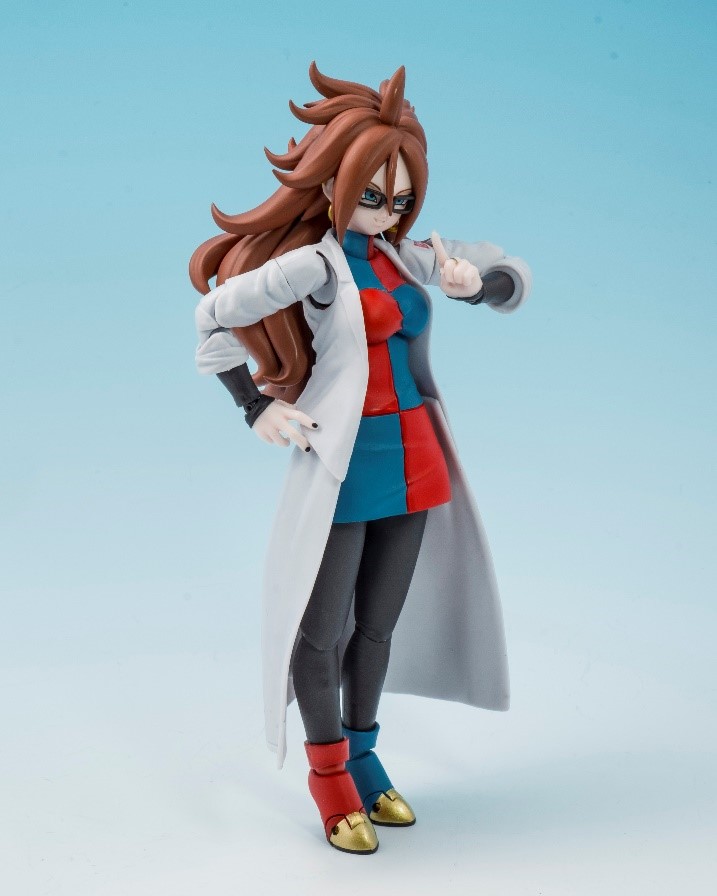 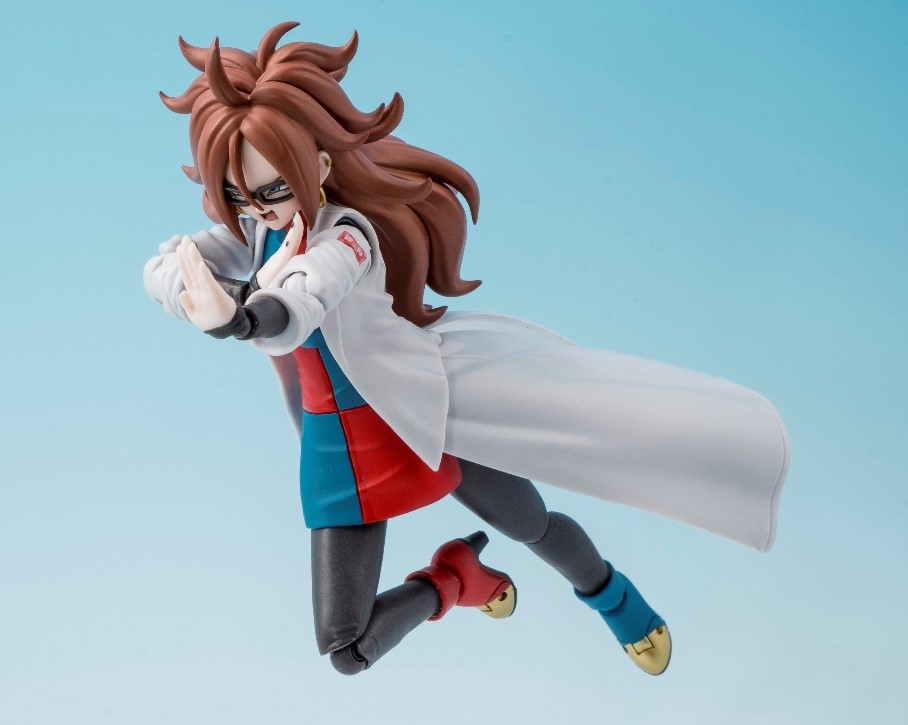 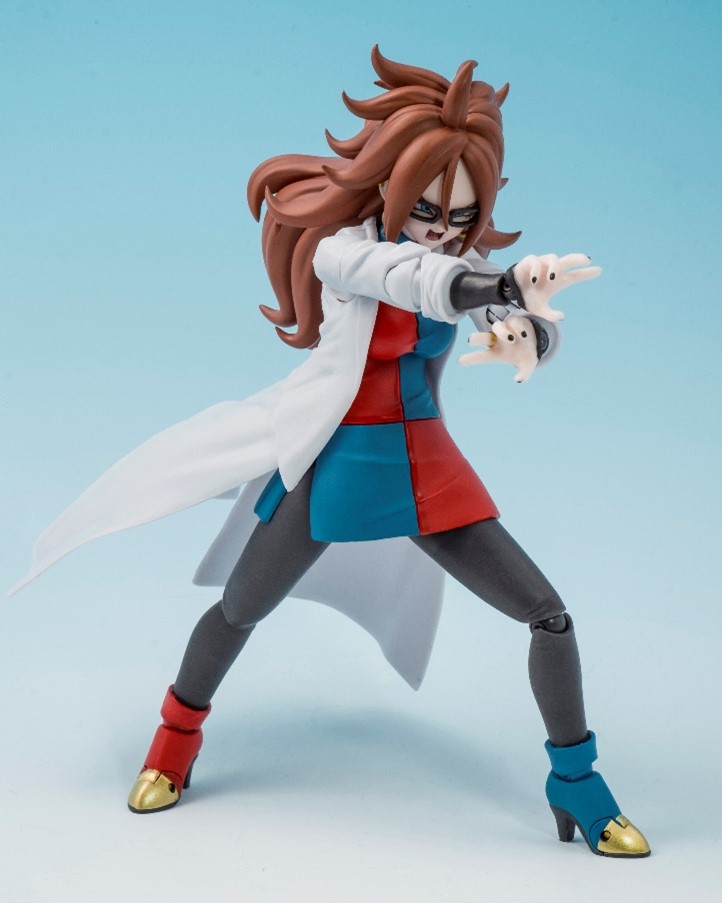 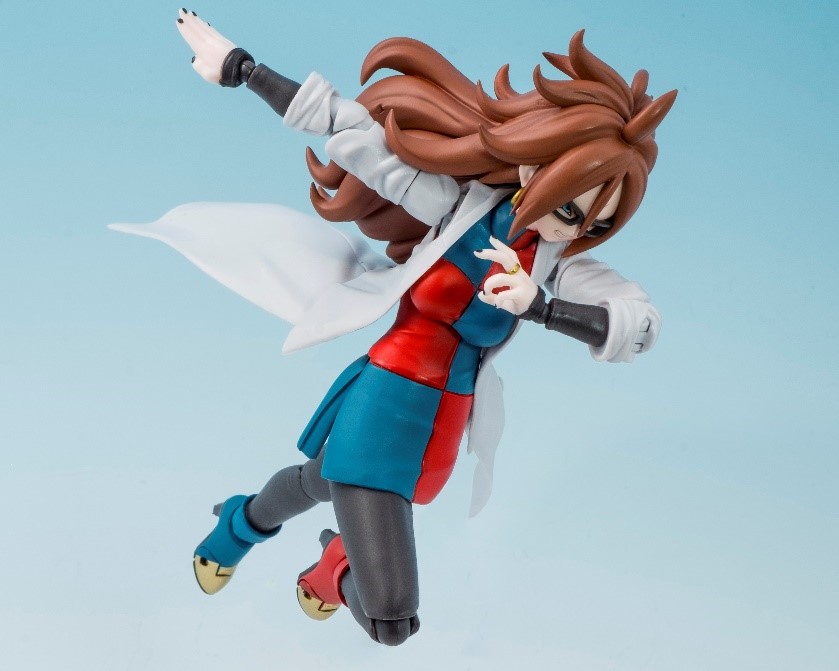 We've mentioned her swappable facial expression parts, but they're not the only customization options that S.H.Figuarts have painstakingly created for this figure!
You can further recreate her poses from the game by swapping between the variety of hand types included! Not only are there closed fists, pointing, and open-handed parts, but also one for holding her glasses, so you can create a pose that looks like she's just taken them off! 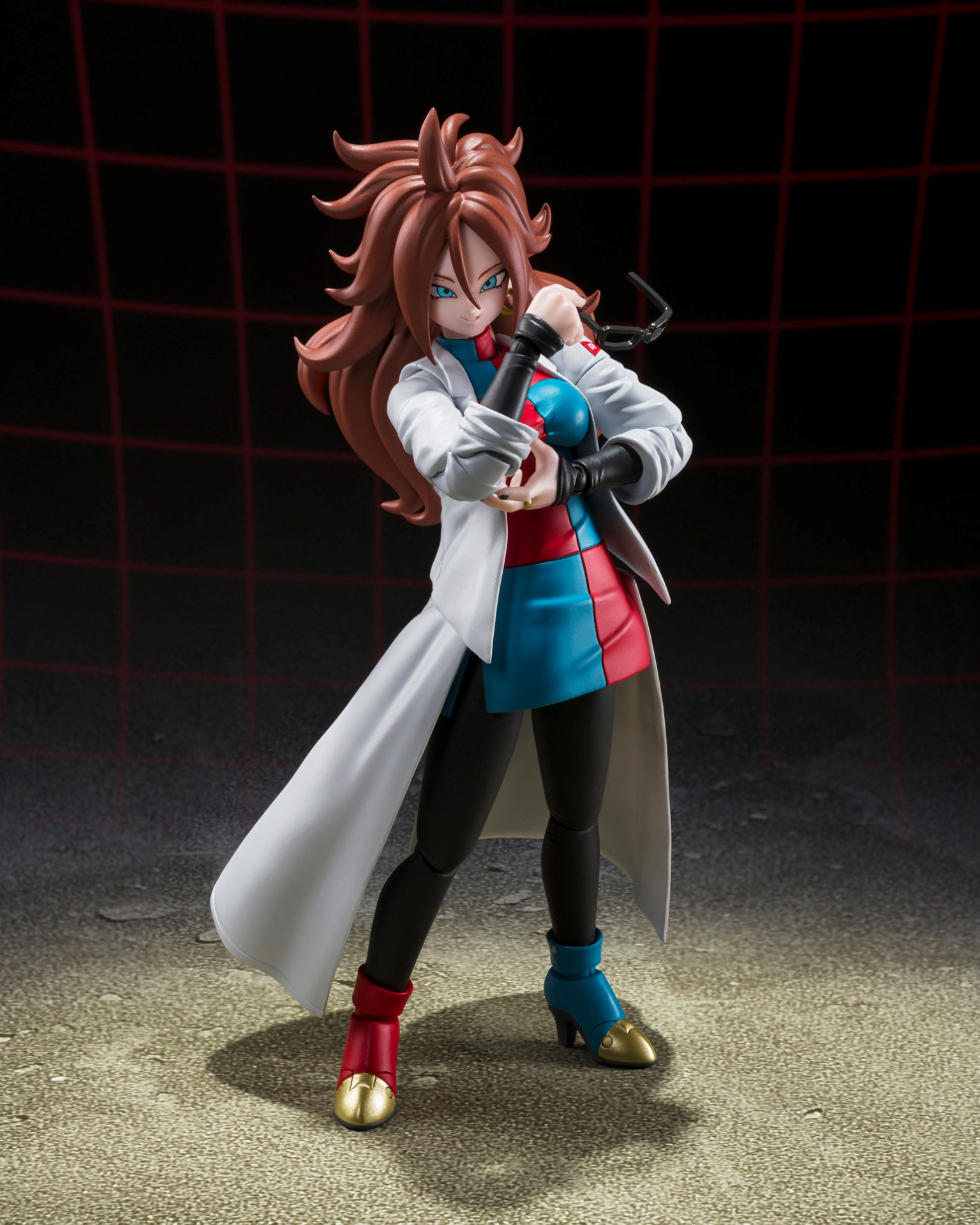 If you combine the effect parts with the pointing hand parts, you can recreate a pose from when she's about to fire off an attack! 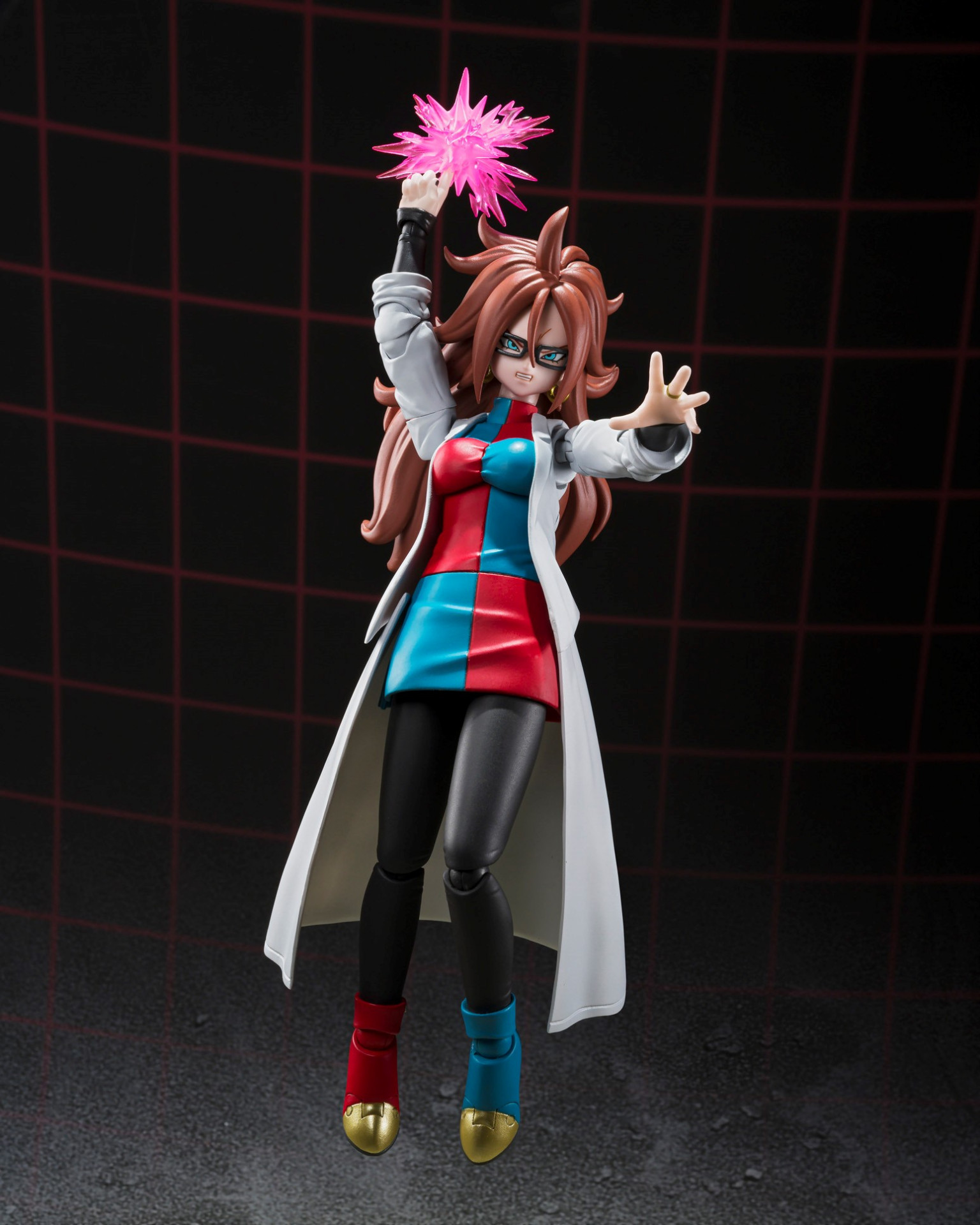 There are also crossed-arm parts, so you can enjoy making Android 21 look extra intimidating by using them in conjunction with her glaring facial expression. 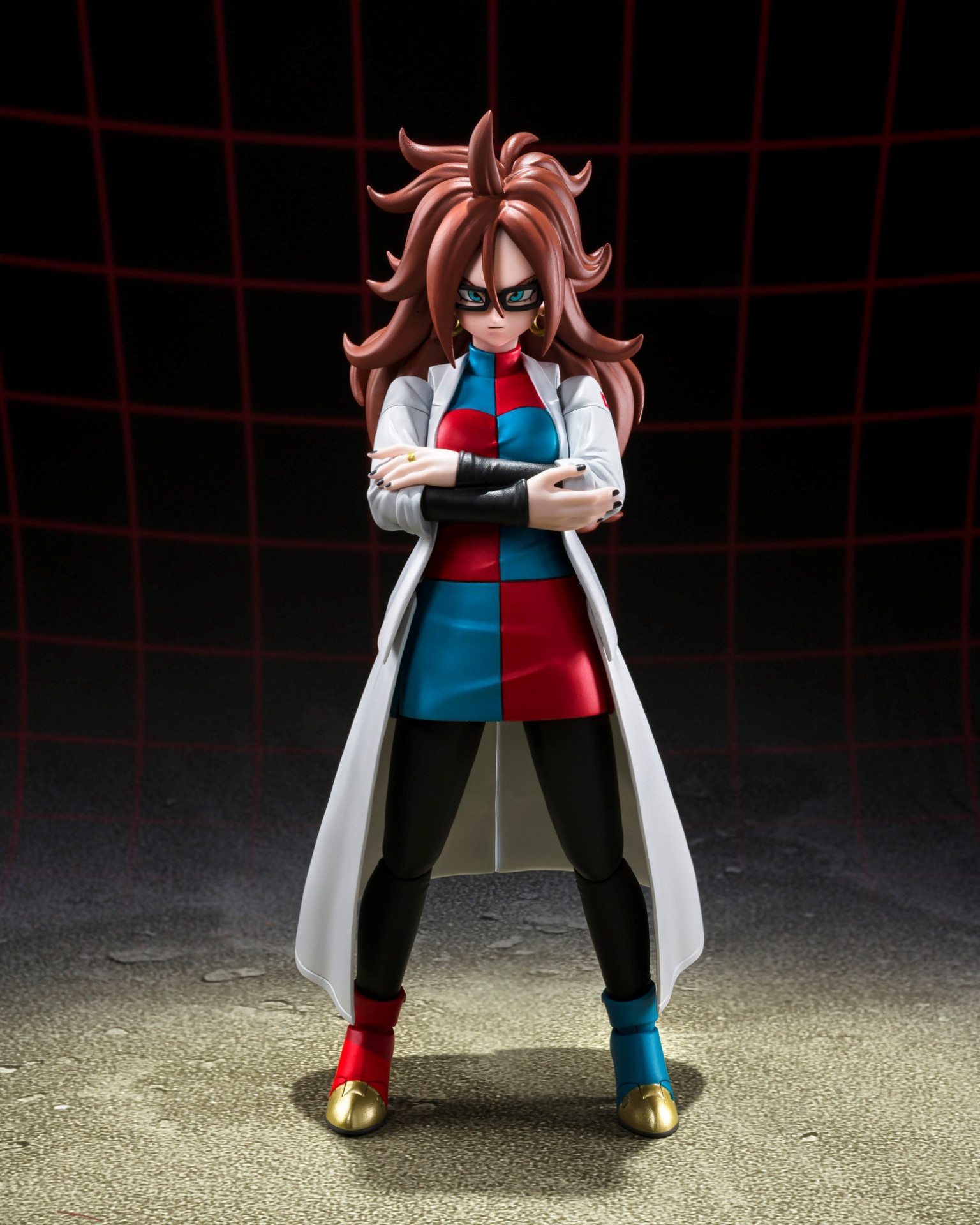 And if you happen to own the Android 21 figure we released in June 2019, be sure to put them on display alongside each other to recreate her pre- and post-transformation forms from the game! 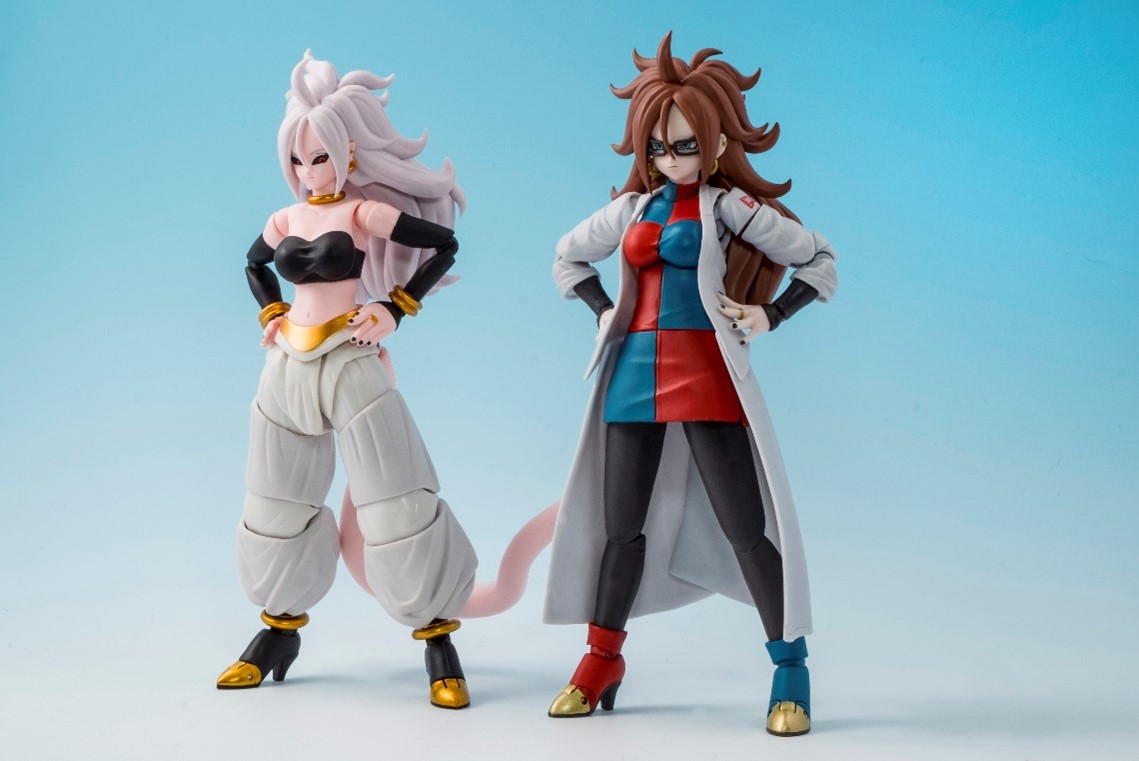 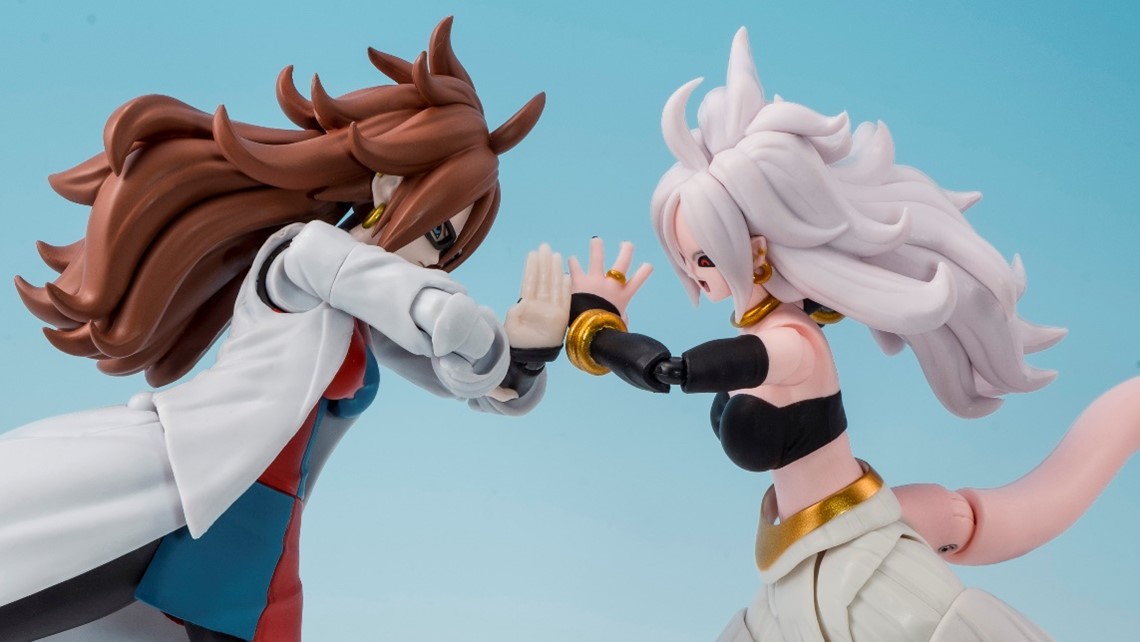 And now moving on to our next awesome figure, we have First Form Cell from Dragon Ball Z! 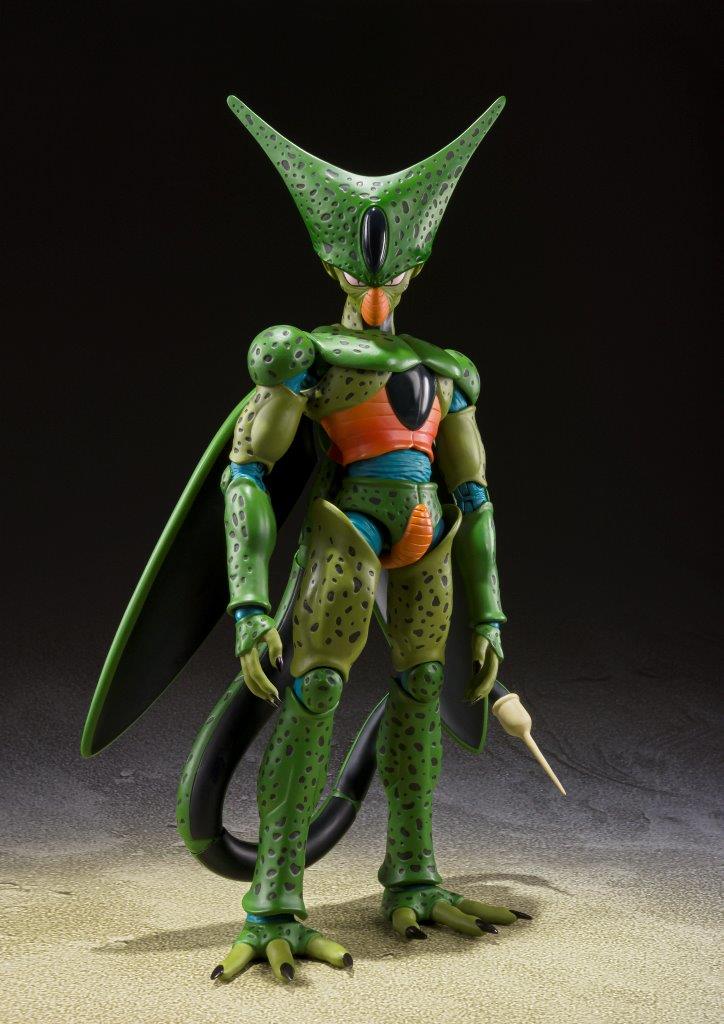 First Form Cell, the fearsome Android composed of Cells from Goku, Piccolo, Vegeta, and more of Dragon Ball's greatest warriors, is finally joining the ranks at S.H.Figuarts!
In addition to his regular expression that comes pre-attached, the figure comes with three other facial expression parts: glancing left, yelling, and smirking. 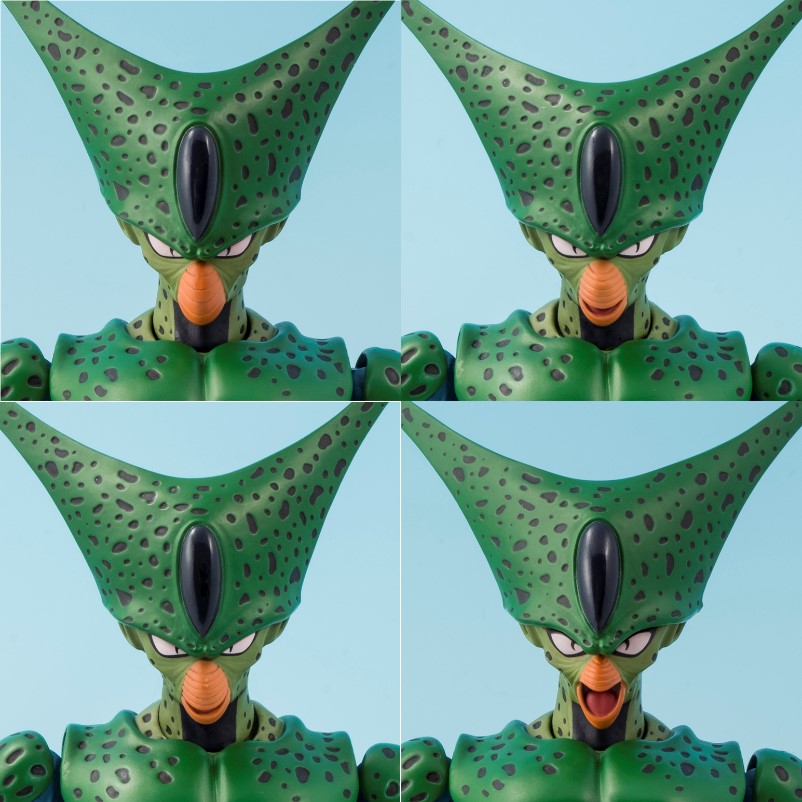 And not only does he have all the mobility you'd expect from the S.H.Figuarts label, Cell's wings and tail are also fitted with movable parts, meaning you can use him to strike some truly dynamic poses! 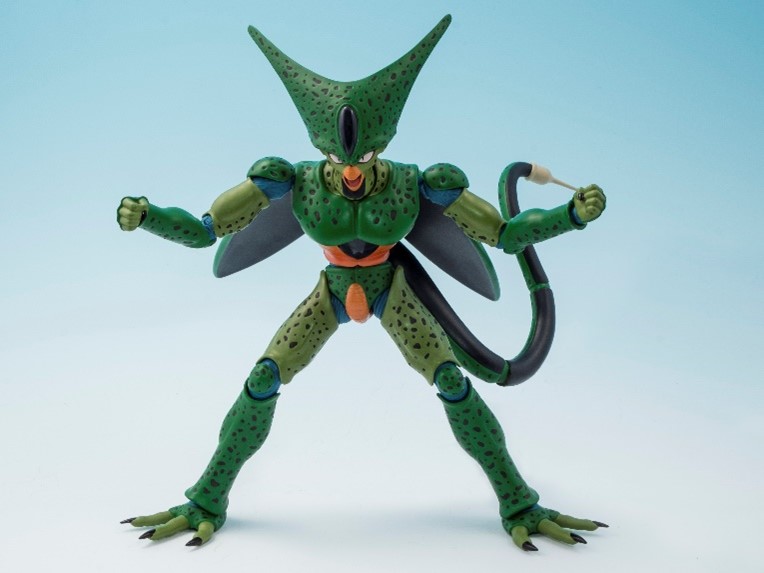 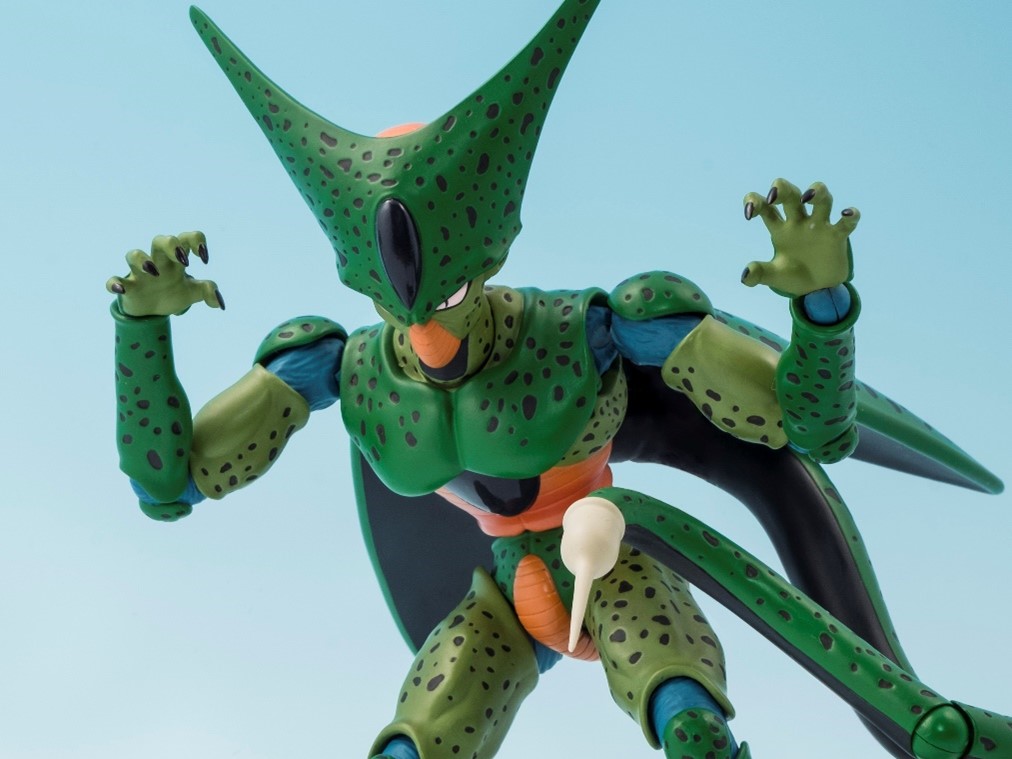 He even has a swappable tail part to recreate the moment when he was just about to absorb Android 17! 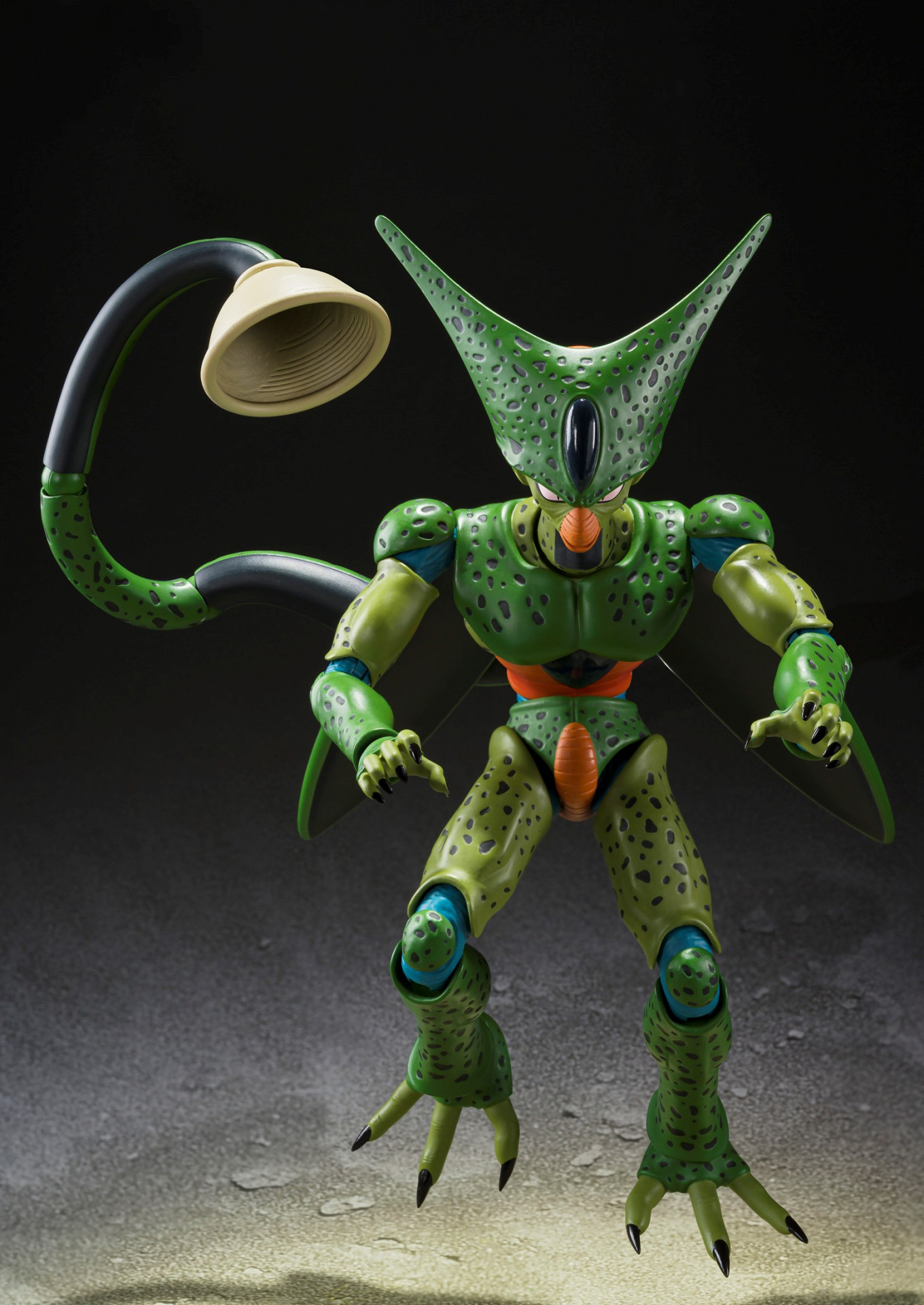 We hope everyone can pick up their own figure of the terrifying monster that absorbed the people of Ginger Town, First Form Cell!

Before we end things, we decided to try lining up all the Android figures released so far in the S.H.Figuarts Dragon Ball series! 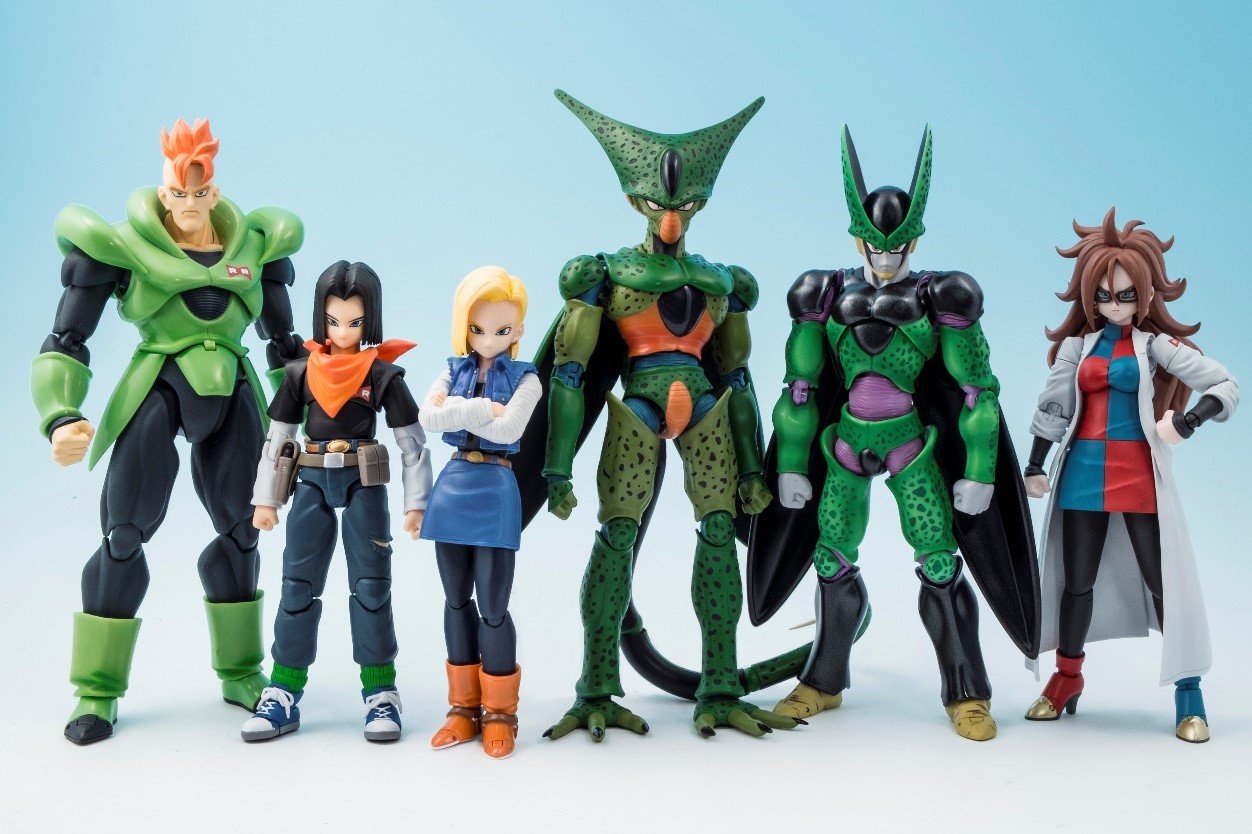 There are other characters we'd love to see in this lineup, and apparently they're in the planning stages of giving more characters the S.H.Figuarts treatment...

And you might not have to wait too long to see them! In fact, there might already be some new info about the S.H.Figuarts Dragon Ball series waiting just around the corner, so please look forward to it!
That's all for today!

The super-popular S.H.Figuarts Android 21 (Lab Coat) figure can be ordered from the Tamashii Web Store now!
S.H.Figuarts First Form Cell can be pre-ordered at participating locations in Japan!