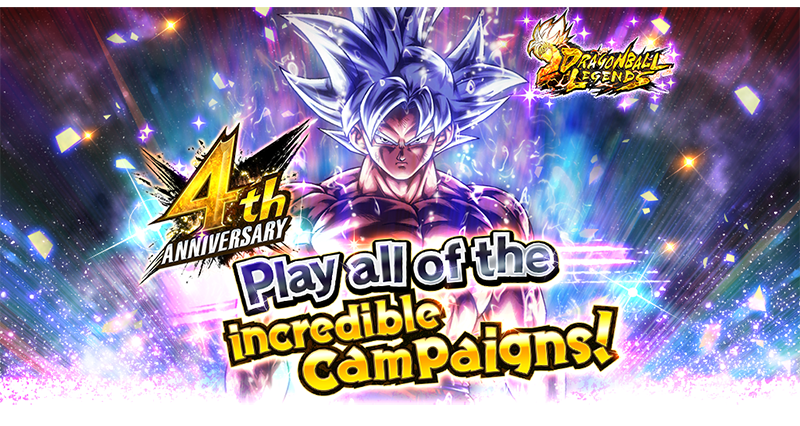 The app game Dragon Ball Legends is currently celebrating its 4th anniversary with the 4th Anniversary Campaign, but don't let the name fool you—there are also tons of campaigns designed with new players in mind! We sat down with the game's producer, TOSHI, to find out how players can best utilize the 4th Anniversary Campaign and why there's never been a better time to join the action in Dragon Ball Legends! 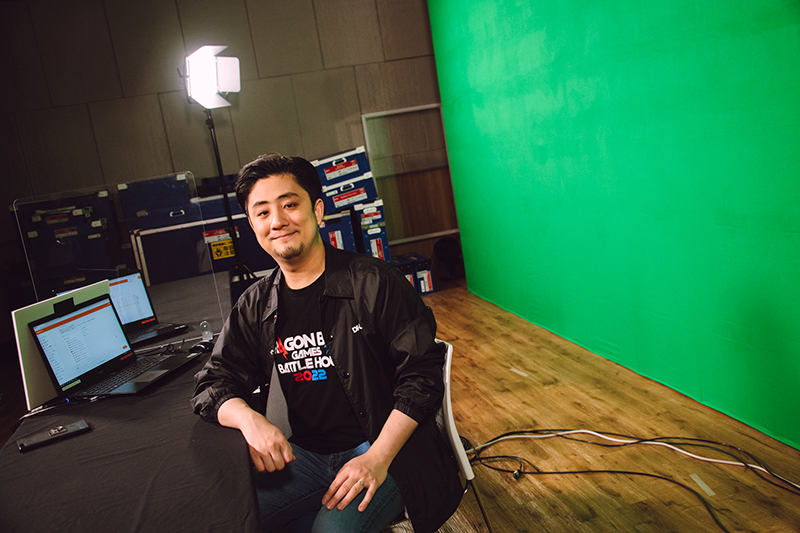 Now's the Best Time to Try Out This One-Finger Card-Action Battle Game!

——It's already been four years since Dragon Ball Legends released, and since then 60 million users have played the game worldwide. Why do you think Legends holds such a strong appeal?

The appeal of Dragon Ball Legends has to be that it's a "one-finger card-action battle" game that allows you to easily control all the characters you know and love from the Dragon Ball franchise from a smartphone that can be held in the palm of your hand.

The way Legends allows anyone to enjoy these cool, 3D-rendered and fully-voiced characters' intense special moves while pulling off satisfying combos makes it uniquely enjoyable.

——The way the moves are animated in Legends is undoubtedly awesome!

For sure! We're proud of the fact that we can reproduce these characters as they appear in the original series at a level of quality that can even be mistaken for a console game!

Being able to battle using these amazing techniques in real-time with the touch of a finger is what Dragon Ball Legends is all about. We meticulously plan out how to make everything from Story Mode to PvP feel good while you're playing it, so I hope that even more people join in on the fun.

In Story Mode, you battle alongside or against characters that appear in the anime, and in PvP, you and your opponent each build a team and duke it out. It's a mode that really lets you enjoy the strategic elements of the game. 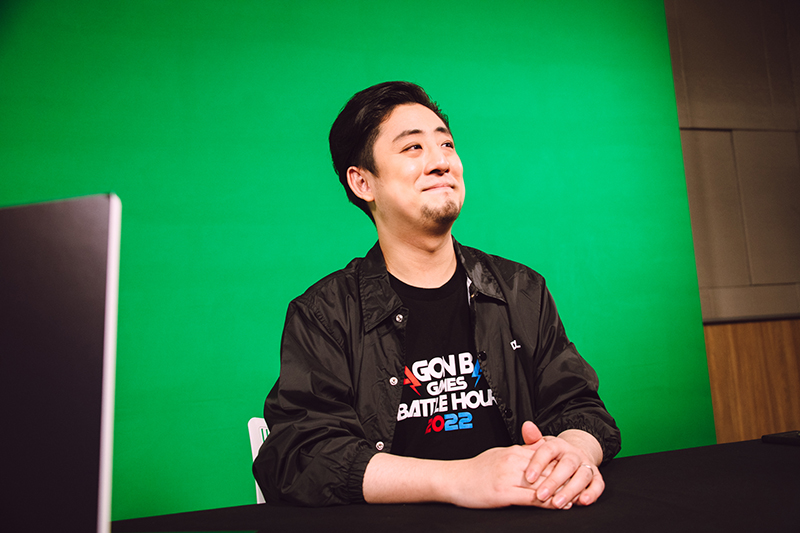 ——So...to be honest, I'm pretty bad at controlling my characters, to the point that I rarely, if ever, see their Legendary Finish animations. Is everyone really playing with just one finger?

Yeah, just the one finger (laughs). How about I give you some pointers later on?

——Thank you so much! Besides battling, there's one other feature that's unique to Legends, and that's Shallot, the main character.

Oh, yes. In this story, the main character isn't Goku. Instead, the plot revolves around an all-new, original Saiyan character named Shallot. Being able to experience the distinctly Dragon Ball type of adventure he's swept up in is another one of the game's defining traits.

As of May 2022, it's been a full four years since the service launched, and every year we celebrate the anniversary with a huge update to Dragon Ball Legends! We're running a variety of campaigns right now for the 4th Anniversary, so now's the perfect time for people who haven't installed the game yet to give it a download and start playing.

Now, I'd like to share some information about the 4th Anniversary Campaign and give everyone a few reasons why new players should take this chance to start playing Legends.

Reason #1: Up to 400 Free Summons to Boost Your Power Level Instantly! 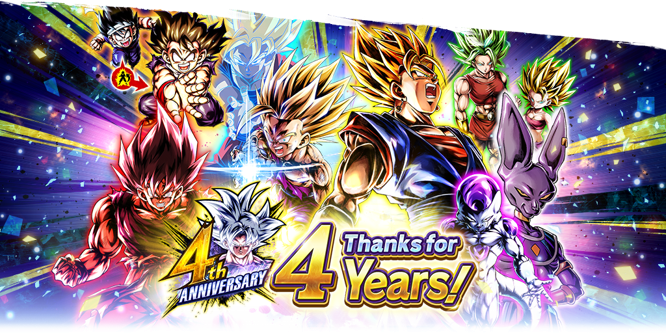 "Thanks for 4 Years" is the name of this event, and during the event period, we’re giving away free consecutive summons every day, up to a total of 400 summons' worth! Since it's our 4th anniversary, we went with 400, meaning this is the largest number of free summons we've ever offered.

If you’re someone who's just starting out, you'll need a lot of characters in order to get stronger, so taking advantage of these free summons is a great opportunity to build up your strength and form your own unique and powerful parties.

Reason #2: Play Up to Part 8 of the Main Story with No Energy Costs for First-Time Clears!

We're also running a "Play Through the Story Mode Campaign", which increases the amount of experience and Zeni you can get from the Story Mode and various events.

Plus, you can play up to Part 8 of the story without using any energy! This is limited to first-time playthroughs, but it's an excellent opportunity to progress through Shallot's amazing journey. You can also get tons of Chrono Crystals by clearing the chapters, so there's no better time to enjoy the awesome Story Mode!

Reason #3: You Can Get Your Wish Granted by Shenron!

You can actually summon Shenron in Dragon Ball Legends during the anniversary period!

There are special codes that you can exchange with other players to get some amazing rewards at random, and among those rewards are the Dragon Balls. Collect all seven, and you can summon Shenron!

It's only fitting that this event comes around once a year for the anniversary, so I hope you all enjoy it while it lasts. Having Shenron grant your wish is sure to be invaluable for anyone just starting the game.

You can even take a selfie with the eternal dragon himself after summoning him!

The Key to Victory: Those Who Master Vanishing, Master Battle

——There sure is a lot of content in the 4th Anniversary Campaign to get first-time players fired up. By the way, TOSHI, you didn't forget about your promise from before...did you?

Of course not. Let me give you three pointers to help you out in battle.

——You mean the three characters you control during the battle, right?

Oh, not just them. Most of the time in Legends, you'll choose three characters to fight from among a total of six in your party, but the three who don't fight still contribute a lot.

Yes! Each character has a Z Ability that can buff the party.

There are a wide range of Z Abilities that buff characters with tags such as Saiyan, Frieza Force, and more, and these effects will still be applied even if the character in question doesn't join the battle. So, you should always make sure to keep the Z Abilities of all six characters in mind.

You don't have to think about it too much at the beginning of the Story, but you should make sure to really think about Z Abilities as enemies and PvP battles get tougher.

——Speaking of which, what are your favorite Z Abilities?

I like parties with Z Abilities that buff characters with the "Sagas From the Movies" episode, so I'll often use those. 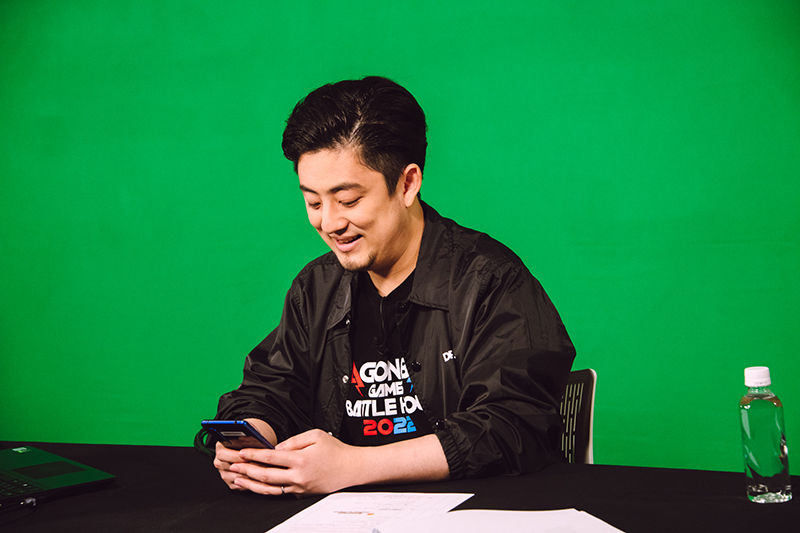 "Those who master Vanishing, master battle".

During battle, if you swipe to the side, you can quickly evade all sorts of enemy attacks. It's called a Vanishing Step, and it's an extremely powerful and important technique when fighting in Legends.

——Since there are no defense actions in Legends, if you don't make good use of Vanishing, you'll take a lot of damage in no time. I remember I had trouble getting the timing down at first.

Once you see an exclamation mark (!) over your character's head, you can side-swipe the screen to perform an emergency evasion, but there's a limit to how much you can use it.

If you evade using Vanishing, it'll consume your Vanishing Gauge. The gauge will refill gradually over time or immediately if you switch characters. However, if you use it recklessly, you'll be left unable to use Vanishing when you need it the most, and that'll put you in a really bad spot.

If you can't use Vanishing during battle, you won't be able to evade attacks, and the characters you worked so hard to level up will keep getting hit and will inevitably be defeated. Master Vanishing, evade the enemy's attacks, and hit them with your own. If you canlearnto fight the same way Goku and his friends do, you'll have mastered Legends.

For players just starting out, I recommend getting the hang of Vanishing by playing through the Story Mode to begin with.

——I see. It's pretty nerve-racking to jump right into PvP, so I'll try using the Story Mode to master Vanishing.

The third pointer is to watch our videos for beginners.

We made video lessons for people who have just started the game and put them on our official site. They're filled with useful techniques and information, so if you're ever having trouble against a strong opponent, by all means, give them a watch.

——Lastly, is there anything you'd like to say to all the Dragon Ball fans out there?

Thanks to all of you Dragon Ball Legends players out there, we've reached our fourth year since launch. To celebrate, we're holding a 4th Anniversary Campaign filled with events where you can get tons of characters and amazing items. And what's more, a character you'veallbeen waiting for, Ultra Instinct Goku, is joining the fight at last.

This 4th Anniversary Campaign was created with our love and appreciation for all the Legends players out there, whether you've just gotten started, haven't played in a while, or log in to play every day. I hope you all enjoy it!!