Welcome back to Dragon Ball-ism: Toriyama Showcase—the series where we discuss Akira Toriyama's various short stories and one-shot works.
This time we'll be taking a look at the heroic, albeit self-serving, adventures of Savings Soldier Cashman. 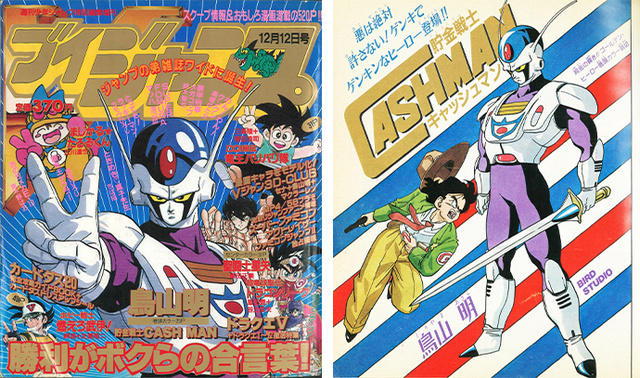 Diora, an alien who crash-lands on planet Earth, fights to rid the world of evil as Savings Soldier Cashman in order to earn enough money to fix his spaceship.
This action-comedy manga was published in the first issue of V Jump and ran for 3 consecutive issues.
What's more, the Nov 27, 1991 issue of V Jump also featured Cashman's debut as an action figure, which was painted by Akira Toriyama himself! You can see just how popular Cashman was among readers who followed his exploits in the first issues of V Jump. 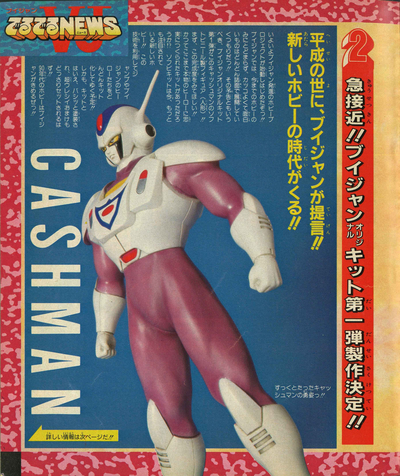 We've even got the full page spread that originally appeared in that issue of V Jump which talks all about the figure!

While chasing an intergalactic criminal in his spaceship, Diora, a police officer from the planet Viletesion, is attacked and crash-lands on Earth.

During the crash, Diora accidentally runs over Chapad, a police officer on Earth. Diora then decides to merge with the fallen officer!
It just so happens that Diora's spaceship is fueled by gold, which can be found on Earth. Thus, Diora comes up with the idea to earn money by defeating evildoers and then using his savings to get his spaceship up and running again!

Chapad discovers the whereabouts of some ne'er-do-wells and rushes to the scene!
Once there, he transforms into...Savings Soldier Cashman!! 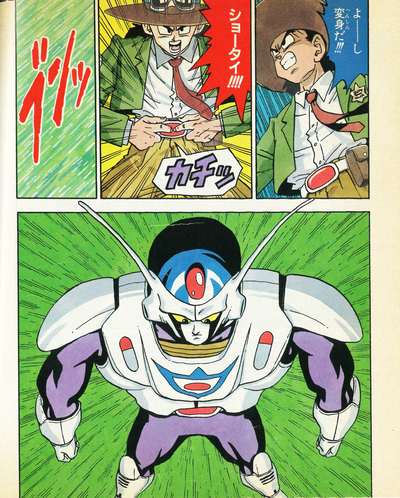 Cashman makes a stylish appearance like a superhero from a tokusatsu series. Or, for all you Dragon Ball fans out there, Great Saiyaman! 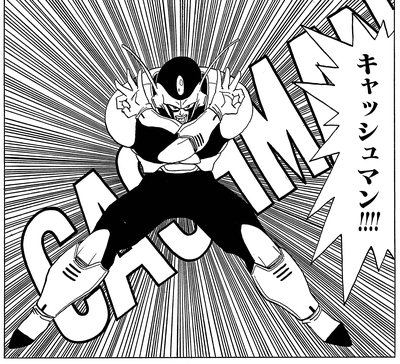 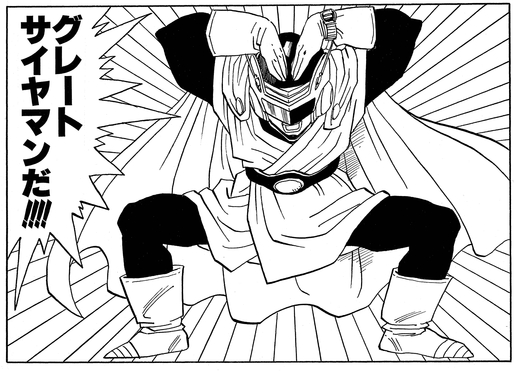 Cashman quickly dispatches the criminals with his incredible strength, and then wastes no time getting money for his troubles from the people he saved. 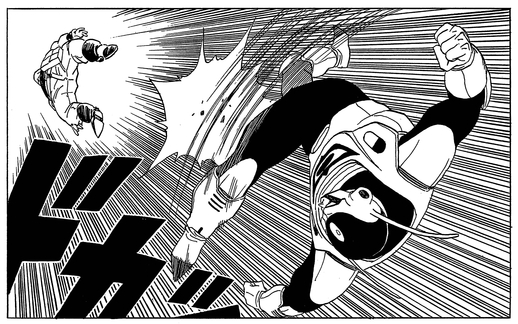 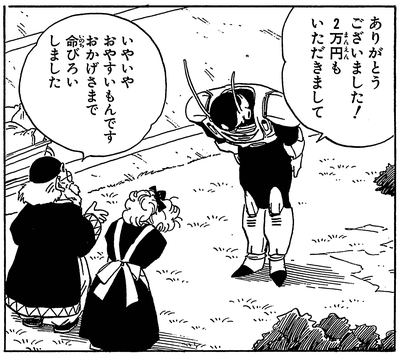 In the second chapter, Chapad’s girlfriend is kidnapped by the strongest and most evil villains in the world, the Devil Kids!
The Devil Kids are a duo who give off an almost otherworldly aura that is eerily reminiscent of Vegeta and Nappa, theSaiyans who invaded Earth!
Just like the aforementioned Saiyans, the small one is the stronger of the two!! 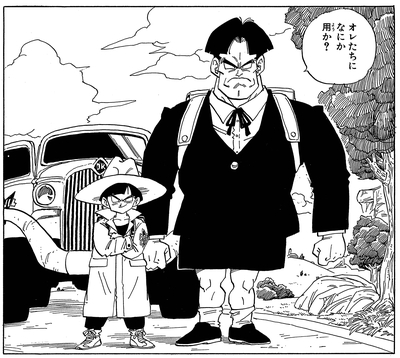 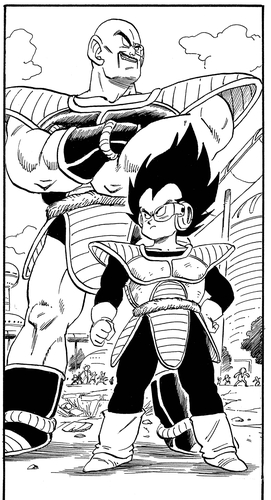 Cashman doesn't mess around and uses his full power to scare off the Kids, allowing him to collect 30,000 yen from Chapad’s girlfriend!
Just like Great Saiyaman, Cashman fully commits to his role. Clothes make the man, they say. 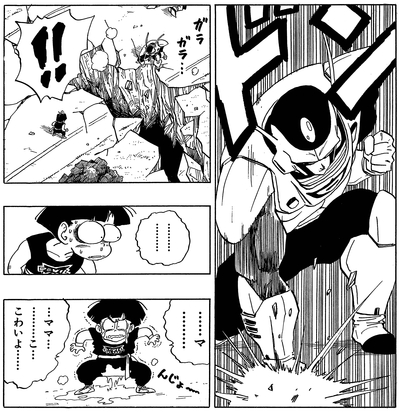 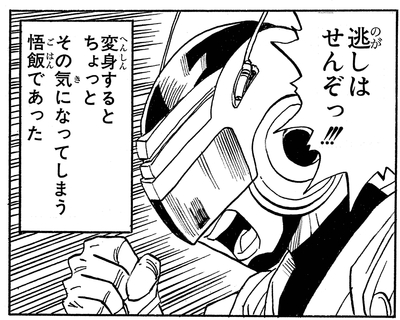 Chapter three introduces a robber named Kazuo Kuriyama who steals 1 billion yen in cash!
Naturally, Diora sees this as a chance to make some serious dough!
But he needs to be on his toes this time! This robber is quite the eccentric type,and has spent a fortune creating a mechanical suit for the sole purpose of defeating Cashman! 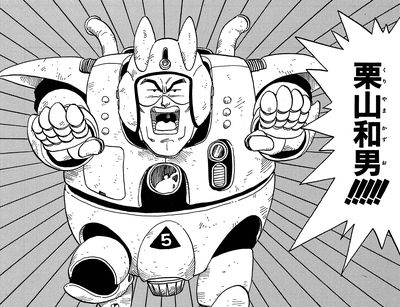 This level of preparation is a lot like the Pilaf Gang, who used their custom Pilaf Machine to challenge Goku. 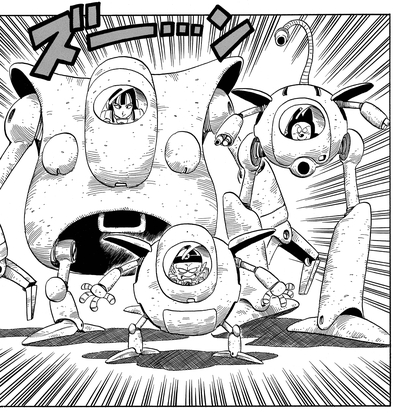 Can Cashman defeat Kazuo Kuriyama?!
Will Cashman be able to save enough money to make it back to his home planet?!
Check out the comics for the thrilling conclusion!

...By the way, a remake of Savings Soldier Cashman was serialized in the June 1997 to Dec 1998 issues of V Jump.
The story was reimagined using the original work under Akira Toriyama's supervision. Two veterans of the Dragon Ball and Dragon Ball Z anime series created and helped produce the remake: Takao Koyama, known for his work as a story editor on the series, oversaw the script while famous illustrator and animation director Katsuyoshi Nakatsuru was in charge of the manga's illustration. Thanks to their hard work, the remake of Cashman became quite popular in its own right.

* All comic images are in Japanese.