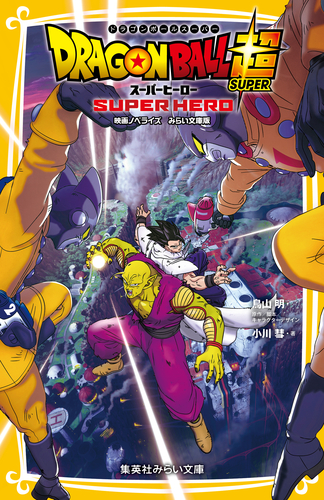 The new movie Dragon Ball Super: SUPER HERO is taking cinema box offices by storm! And as of June 14, Mirai Bunko's novelization of the film will be available in bookstores across Japan!

Long ago, a sinister group known as the Red Ribbon Army plotted to seize control of our planet...
However, their plans for world domination were disrupted by a young Saiyan named Goku, who went on to dismantle their entire organization. They were thereafter not seen or heard from for many years, but in the shadows an unknown few would take up the flickering torch of the Red Ribbon Army's grand ambitions.
Now, the villainous army's successors have recruited prodigal scientist Dr. Hedo into their ranks, giving rise to the creation of to two new Androids: Gamma 1 and Gamma 2. Not only that, but these Android warriors have branded themselves as "super heroes" and are now targeting Piccolo and Gohan!
Just what could the objective of this new Red Ribbon Army be?!

Take home the epic battle for the fate of the world to experience in the form of a thrilling novel!
Tons of awesome illustrations also included!!