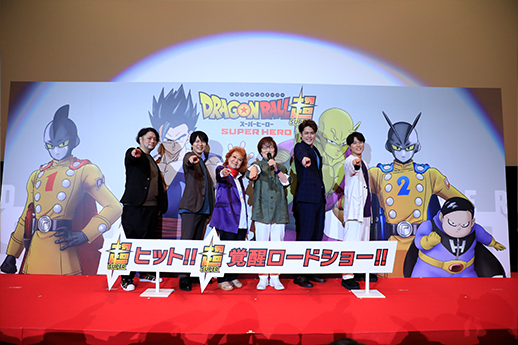 Dragon Ball Super: SUPER HERO is now playing in theatres in Japan!
On release day, a movie premiere event was held together with the actors that voice the main characters in the film and the movie's director, Tetsuro Kodama. 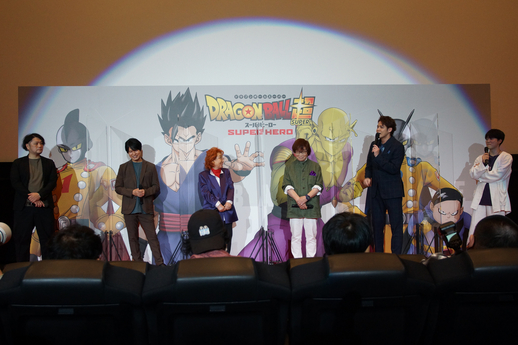 The event was held after one of the movie's initial screenings, and the enthusiasm from the passionate Dragon Ball fans in attendance was overwhelming! Not to be outdone, the voice actors shared their own Dragon Ball passion along with their thoughts on the film, and they even spilled some behind-the-scenes stories about events that transpired during production!

Masako Nozawa, the voice of Goku, Gohan, and Goten

"Goku normally is the one who gets to go wild as the main character, but this time it's Gohan's chance to shine! I really think that this turned out to be a wonderful, heartwarming movie. Everyone here today, please invite at least five of your friends to go see the movie too!"

Toshio Furukawa, the voice of Piccolo

"A lot of stuff happened right before the movie's release, but we were able to make it safely to the premier thanks to the tireless work of the staff and the kind support from all the fans. I couldn't be happier or more thankful. As for my thoughts on the film... I don't want to spoil anything for people at home, so I'll just say that Piccolo was adorable this time, right?"

"This is really a dream come true. I honestly love Dragon Ball, and I've always wanted to play a voice for one of the characters. When I was a kid, I came to see the movies just like you all have today, so to think that now I'm standing up here as one of the voice actors—I'm overwhelmed. I feel like I'm dreaming."

Hiroshi Kamiya, the voice of Gamma 1

"I'm overjoyed. Not only did we finally make it to release day, but I even get to stand up here on stage next to my beloved Mako-san (Masako Nozawa)! Times like these make me really glad that I became a voice actor. As for the movie itself, our director, Mr. Kodama, is simply the best. That's all I can say."

Mamoru Miyano, the voice of Gamma 2

"I'm so glad to finally be here on release day. I'm a huge Dragon Ball fan, and the fact that the Red Ribbon Army is back and playing a central role this time around is really the icing on the cake. While the movie is nostalgic in that sense, it's also packed with twists and turns to get fans like us seriously pumped up. And beyond that, it's a movie that reaffirms to us just what it is that makes a superhero so great, as well as being filled to the brim with all sorts of other treats and surprises." 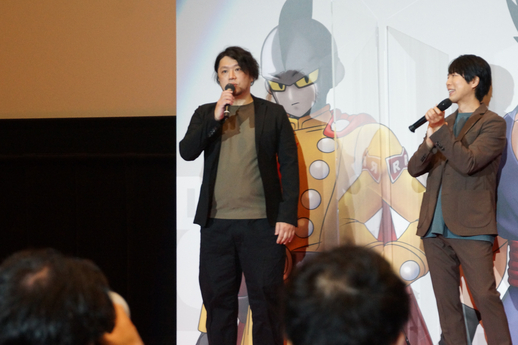 "It took around four years in production to get from the pilot version to the finished film, but when it was done and dusted, everyone started talking about how quickly the time flew by. I assure you, however, it was indeed a very long time (laughs). But I am very pleased that we were able to finish it." 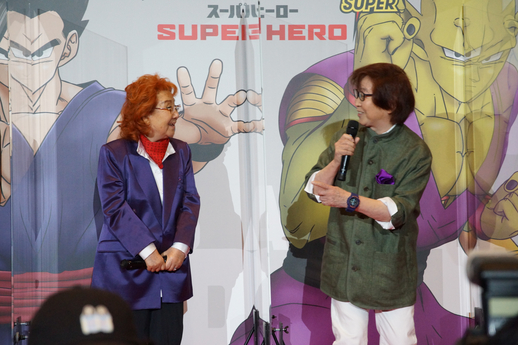 Furukawa: "Way back during the time when Piccolo took a very young Gohan off to undergo his rigorous training, I remember Masako and Mr. Yanami would scold me, saying, "Shame on you for going all-out on a kid like that!" (laughs)
It's been a few decades since then, but I never thought I'd see the day when that master-student duo would be playing the lead roles in a feature film together. I felt like I was using Buku-jutsu when I found out—I was floating on air!" 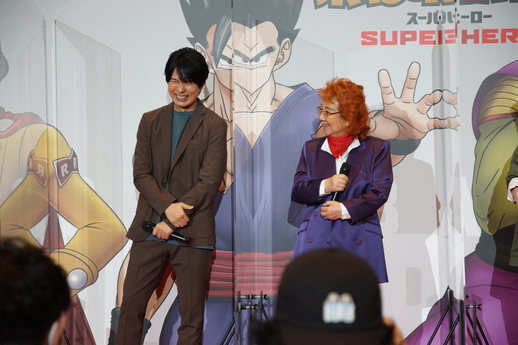 Nozawa: "It was fantastic. It's so, so easy to act with Hiroshi. I don't know if I should say this, but working with him feels like I'm just chatting with him at the hair salon we both go to. (laughs)"

Nozawa: "And since we get along so famously, we don't have to hold back when the fighting starts. If I go this way, he goes that way—smooth as you like."

Kamiya: "It was a blast! I positively adore Mako-san, so it was very special for me to work together. It's like, when we Japanese people catch a glimpse of Mt. Fuji, we feel like it's our lucky day or something, right? That's what it's like for me every time I see Mako-san—like I've won something. She fills me with joy." 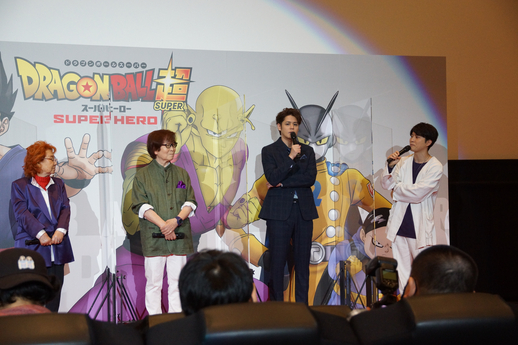 Irino: "That scene at the start is quite long, right? It's a very important scene, of course, but this is Dragon Ball people are coming to see! You want to see action-packed battles, right? However, when I put that feeling aside to record the scene, I found that the atmosphere and the storytelling style that Director Kodama and all the other staff were working hard to create for the film were extremely entertaining. Even though it's a serious conversation, the creators have slid in some jokes throughout too, so you'll find yourself chuckling along but still getting all the important information. The visuals are fun to watch, and the sound effects and background music are great too. Thanks to all that, the whole scene comes together wonderfully, and after I'd watched the finished version play out, I ended up thinking it was fantastic!"

Miyano: "There are a lot of scenes where Miyu is explaining something as Dr. Hedo, but Gamma 2 is always getting up to something in the background. Director Kodama told me to completely improvise all those moments, and at the time I thought there was no way that even half of what I was saying would end up in the movie—but guess what? They used it all."

Miyano: "It's like, Hedo finishes talking and you realize you haven't taken in a word he said!"

Irino: "Oh no you don't! Don't try to write Dr. Hedo off like that! People listen to everything he says, right?!"

Director Kodama: "One of our objectives for this film was to really nail the silly humor, and so I have to thank Mr. Miyano for coming through on that with his improvisations."

MC: "Hearing all this makes you want to watch the whole movie again, right? Maybe another two or three times!"

Furukawa: "Japan's pop culture is represented primarily by animation, and it's held in high regard all around the world, right? I think that Dragon Ball as a series is the pinnacle of that concept. As for this film specifically, I have simply too much praise for it to be able to put into words, and so I'd like to leave that to the people of the world to say once they've seen it."

Nozawa: "There have been many Dragon Ball films, but not one of them has been a disappointment. I truly think that everyone will have a great time watching this movie, so please go out and see it!"

Dragon Ball Super: SUPER HERO is the product of all the hopes, passion, and effort that the performers and staff poured into it. Be sure to experience it for yourself on the big screen at a cinema as soon as you can!