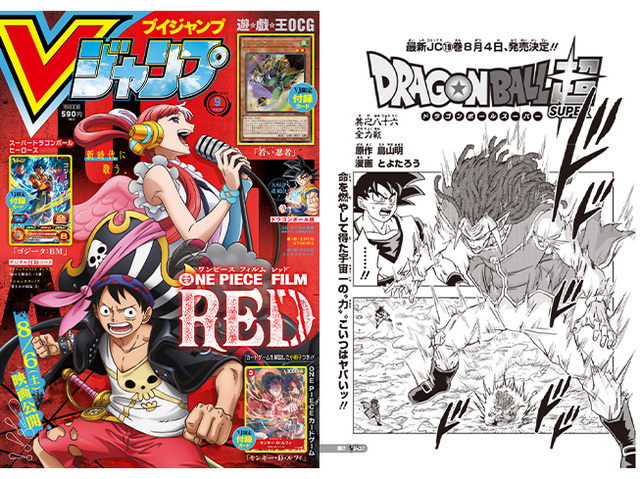 The latest installment of the hit manga Dragon Ball Super is being released in V Jump's super-sized September edition, which is set to hit shelves on Thursday, July 21 in Japan! In this installment, will the exciting battle between Goku and Gas reach its conclusion?!
As this amazing arc draws ever-closer to its conclusion, let's take a look back at the events of the Granolah the Survivor Arc so far!

Granolah, is a Cerealian who works as a bounty hunter for a shady organization known as the Heeters. He otherwise lives a peaceful life with the elderly Namekian Monaito, however he still has a burning desire for revenge against the Saiyan race and Frieza Force, both of whom brutally attacked and ravaged his home, Planet Cereal, many years ago.

Upon hearing that Frieza had been resurrected, Granolah saw his chance to avenge his planet and fellow Cerealians at long last. He assembled the Cerealian Dragon Balls and wished to become the strongest warrior in the universe—a wish that was granted at the cost of dramatically shortening his own lifespan! 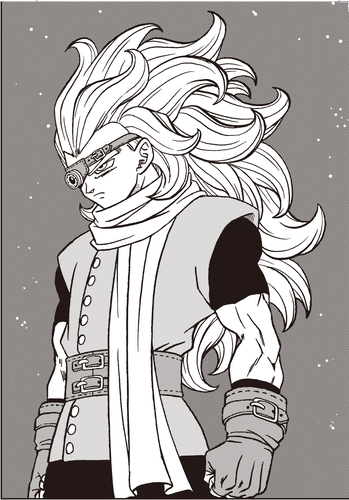 All according to Elec's plot, a fight broke out between Granolah, Goku, and Vegeta when the Saiyans came to Planet Cereal. Although Granolah had become the strongest warrior in the universe, the two Saiyan warriors had their own means of fighting back: Goku with his refined Ultra Instinct, and Vegeta with his new power attained through training with Lord Beerus, "Ultra Ego"! 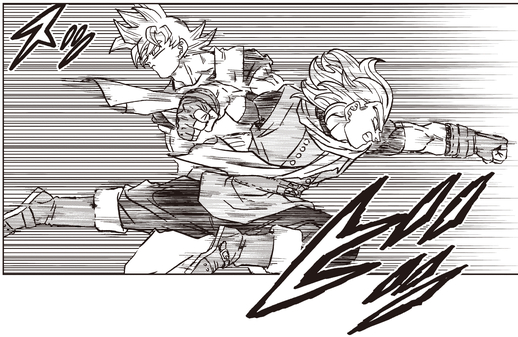 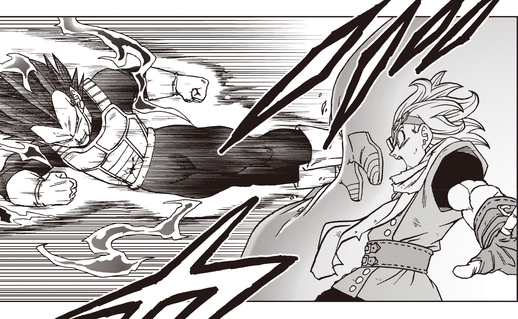 As the battle between the three of them unfolded, Monaito appeared and explained that Granolah's quest for vengeance had all been based on a falsehood.
As it turns out, the ones responsible for the destruction of Planet Cereal wasn't the Frieza Force, but the Heeters themselves! What's more, the young Granolah's life had been saved by a member of the Saiyan race he hated so much: Goku's father, Bardock!!

Granolah was shocked to learn the truth, but before he could process this new information, the Heeters appeared before him to rid themselves of the obstacles to their plan in person! And to make sure the job got done, Elec used the Cerealian Dragon Balls to turn his brother, Gas, into the new strongest warrior in the universe! This led to a battle to see who was truly the universe's strongest warrior: Gas or Granolah! 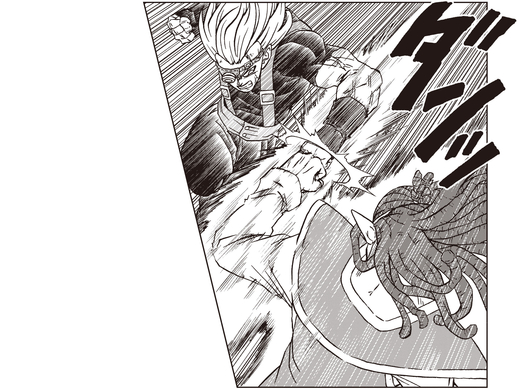 Through their back and forth, Granolah seemed to gain the upper hand. Surveying the battle and determining his brother might lose, Elec decided to turn the tables back in their favor by removing the limiter that Gas wears to keep his primal instincts in check! With his unfettered power unleashed, Gas lost control of himself and went on a wild rampage, attacking friend and foe alike!

However, Elec stepped in once more to remind his rampaging brother of a promise he made forty years prior, allowing Gas to regain his composure. With his full power intact and now under his own control, Gas had become the true strongest warrior in the universe!

Granolah found himself defeated by the newly awakened Gas, however Goku stepped in to intervene after receiving the last of Vegeta's energy.

Goku managed to create just enough of an opening to pull off his signature Teleportation technique, taking their fight across multiple planets before leaving Gas stranded on a distant world and transporting himself back to Planet Cereal! Goku then took the severely injured Granolah and retreated to Monaito's house. 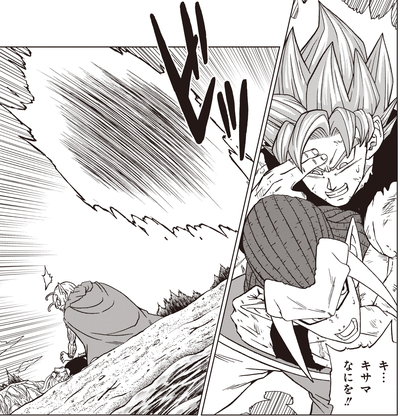 It turned out Monaito had something important at his house: the Scouter his father Bardock had left behind forty years ago! Using the Scouter, they were able to access an audio log of the battle his father fought against Gas!

It turns out that four decades ago, Bardock had challenged the Heeter in order to protect a young Granolah and Monaito! 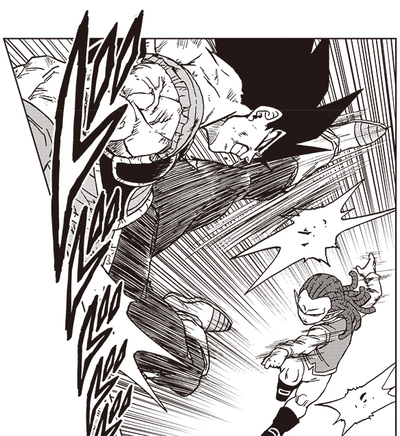 Despite fighting his hardest, Bardock was slowly overwhelmed by the true unleashed power of his opponent.
However, showing how Saiyans always push past their limits during battle, Bardock ended the battle by launching an enormous blast with all his might that hit Gas head-on. 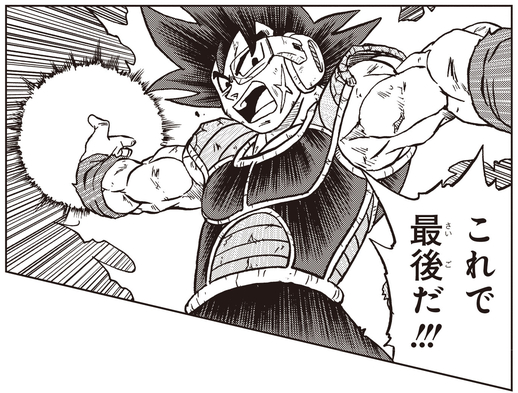 Upon learning of his father’s battle, Goku recalls a memory from his early childhood. Vegeta also comes to the realization that he had been carrying the wrong burden this whole time.

In the end, the two Saiyans decide to accept the final teachings of Bardock, as well as who they are, so that they can defend what they hold dear! And not a moment too soon as Gas, who had been traveling across the universe this whole time, finally caught up to them! It was time for the two Saiyans to put what they had just learned to the test in their rematch with Gas!

Vegeta uses his Ultra Ego transformation to take on Gas! Despite being on the receiving end of the Heeter's attacks, he takes advantage of his form's ability to use damage as fuel to change and evolve his strength and begins landing some decisive counterattacks! However, the damage eventually takes its toll and Vegeta collapses. Before Gas can deliver the final blow, Goku saves Vegeta and transforms into his black-haired Ultra Instinct form!
However, this is a different form of Ultra Instinct in which Goku retains his emotions: in other words, Goku has finally awoken his true Ultra Instinct! With this newfound transformation, Goku overwhelms the strongest warrior in the universe, sending Gas crashing to the ground with a devastating attack!

Elec appears by his brother's side once again and harshly reprimands him, telling him to "...find the resolve to die in battle if you have to!"
Goku tells Elec to take Gas home, when suddenly Gas finds a way to power up even more! But there's something strange about the way he looks... 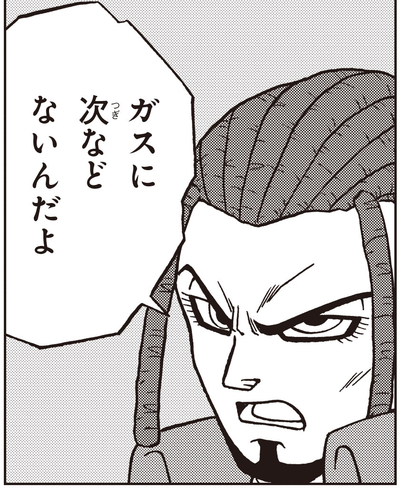 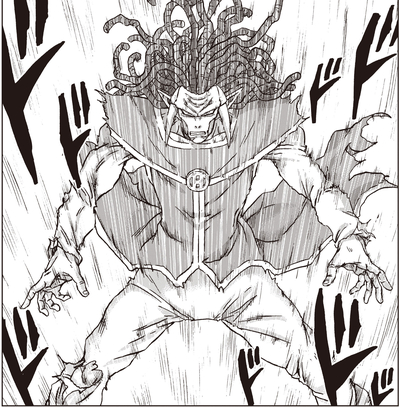 V Jump's super-sized September edition hits shelves on July 21! Will this chapter contain the conclusion to Goku's fight with Gas?! 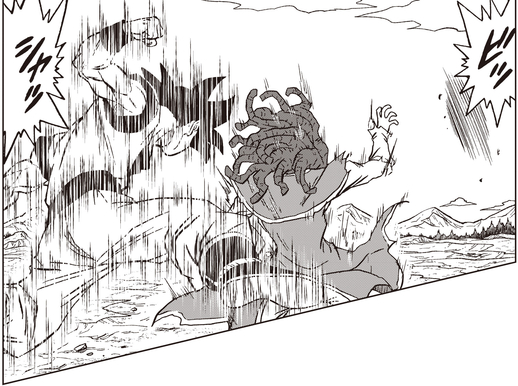 Who will win this epic life and death struggle?! Be sure to read the new chapter in V Jump's super-sized September edition to find out!!

* All comic images are in Japanese.