Dragon Ball Super: SUPER HERO DLC Pack 1 has been announced for Dragon Ball Xenoverse 2 on PlayStation®4, Xbox, PC, Stadia, and Nintendo Switch™! A promo video has also been released to give you a taste of what's in store!

Gamma 2 Joins the Battle as a Playable Character! (DLC) 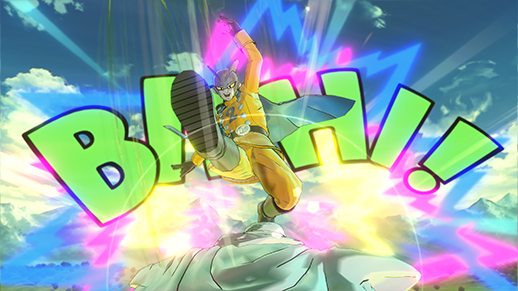 Meet Gamma 2, an Android that played a major role in the hit motion picture Dragon Ball Super: SUPER HERO! You can re-experience his high-octane, thrilling action sequences from the film again in Xenoverse 2. Even Gamma 2's signature flashy, letter-filled attacks have been recreated in the game, so you can enjoy fighting your opponents in style!!

This special set will include not only Dragon Ball Super: SUPER HERO DLC Pack 1 that unlocks Gamma 2 as a playable character, but also the upcoming DLC Pack 2. Stay tuned for more news about Pack 2 of this exciting DLC! DLC Pack 1 and the DLC Pack Set are scheduled for release in autumn of 2022!

Reinforcements Arrive to Back Up Gamma 2?! Check Out the New Promo Video!!

The following promo video showing off Gamma 2's super stylish fighting style has been released! Make sure to watch all the way to the end of the video, because it seems like a certain ally of Gamma 2's will make an appearance!!

Check out the video here!!

Stay tuned for more exciting news in the days to come!!