Figure Set Giveaway! Check Out the Twitter Campaign Celebrating the Release of the DATABASE! (Ends 9/28 23:00 PST) 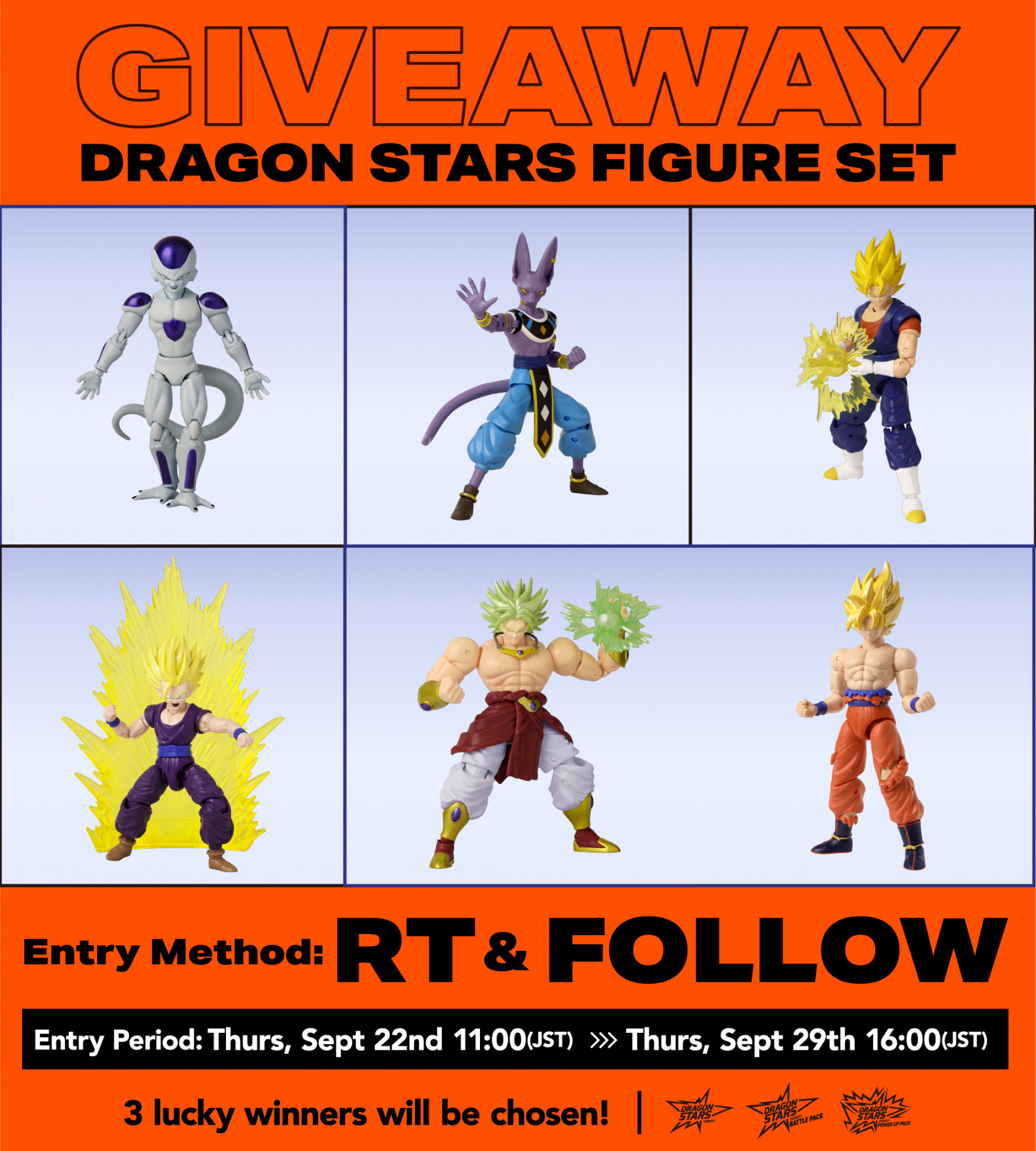 The brand-new DATABASE is live on the Dragon Ball Official Site!
To celebrate, we're holding a special giveaway where 3 lucky fans will be able to win a fabulous 5-piece Dragon Stars set!

The Dragon Stars series is famous for its super-cool and incredibly articulate action figures!
These amazing figures also come with effect parts that allow you to recreate your favorite scenes from Dragon Ball!
Be sure to enter this marvelous giveaway while you still can!

1. ELIGIBILITY.
The Giveaway Dragon Stars Figure Set Twitter Campaign (“Promotion”) is open to individuals who are at least eighteen (18) years of age or the age of majority in their state (whichever is older), as of the start date of the Promotion. Employees of Sponsor and its affiliates, vendors, and their respective immediate families are not eligible to enter this Promotion. If the winner is found to be ineligible, Sponsor reserves the right to award the prize to another participant and to require the return on any prize already rewarded. THIS PROMOTION IS OPEN TO LEGAL RESIDENTS OF THE UNITED STATES ONLY. THIS PROMOTION IS VOID IN RHODE ISLAND AND WHERE PROHIBITED OR RESTRICTED BY LAW.

Limit one (1) entry per person.

4. ODDS OF WINNING.
Odds of winning depend on the number of eligible entries received.

Limit one (1) prize per person. The winners will be responsible for any and all federal, state, and/or local taxes resulting from acceptance of such prize. Prizes are not transferable or redeemable for cash. No prize substitution is allowed except Sponsor may substitute a prize of equal or greater value at its sole discretion. All prizes will be awarded.

6. WINNER SELECTION AND NOTIFICATION.
3 potential winners will be randomly drawn by Sponsor from all eligible entries on or about 9/30/2022. Distribution of prizes will be chosen randomly from selected potential winners. Sponsor will contact the potential winners via Twitter Direct Message. If no response is received within forty-eight (48) hours of attempted notification, the prize will be forfeited. Winners will be required to complete, sign, and return a liability release within seven (7) days from notification in order to be eligible to receive the prize. Failure of any winner to provide required information within the specified time period or of noncompliance with the foregoing requirements or if a winner cannot accept a prize as specified by Sponsor, the prize will be forfeited. In the event of a prize winner forfeiture or disqualification, Sponsor will randomly select an alternate winner.

7. CONDITIONS OF PARTICIPATION.
The Promotion is subject to these Official Rules. By participating and/or accepting a prize, you agree: (i) to be bound by these Official Rules; (ii) to waive any right to claim ambiguity in the Promotion or these Official Rules; (iii) that Sponsor may prohibit a participant from participating in the Promotion if it, in its sole discretion, determines such participant is attempting to undermine the legitimate operation of the Promotion in any way; (iv) the prizes are provided “AS IS” and WITHOUT WARRANTY OF ANY KIND, express or implied; (v) to release Twitter, Sponsor, and its parent, subsidiary, and affiliated entities together with their respective directors, employees, officers, licensors, and agents (collectively, the “Released Parties”) from any and all claims, liability, loss or damage including but not limited to injury in connection with awarding, receipt and/or use or misuse of prize or participation in the Promotion; (vi) that Released Parties are not responsible for any printing, typographical, administrative or technological errors in any materials associated with the Promotion; and (vii) that the laws of the State of California without regard to conflict of laws provisions, will govern all disputes and claims arising out of this Promotion, and shall be brought exclusively in the federal courts located therein.

9. PRIZE WINNER LIST/RULE REQUESTS.
To obtain a copy of these official rules or a winners’ list within ninety (90) days of the close of the Promotion Period, send your request (please specify “Winners’ List” or “Rules” and Promotion name) with a self-addressed stamped envelope to Sponsor.

10. NO ENDORSEMENT.
The Promotion is in no way sponsored, endorsed, administered by, or associated with Twitter.