[September 2022] Toyotarou Tried to Draw: A Divine Deity in His Youth! 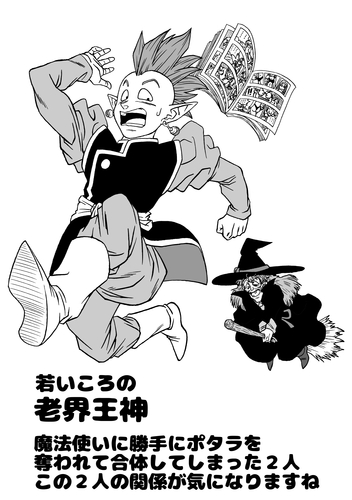 Young Elder Kai
The Elder Kai in his youth along with the witch
who stole one of his Potara Earrings,
causing the two to permanently fuse.
I wonder how they knew each other in the first place...?
——Toyotarou

This is a special monthly series where we feature sketches drawn by Toyotarou, the creator of V Jump's ongoing series Dragon Ball Super! This month's illustration is "Young Elder Kai"!

The eccentric Elder Kai is a being who possesses incredible magical abilities, such as unleashing the hidden potential in others like he did for Gohan in the Majin Buu Saga. How did he get these magical abilities, you ask? Well, it just so happens that he had a fateful encounter with a powerful witch back in his heyday, and the two unlikely individuals ended up fusing into one using the Potara Earrings!

V Jump's super-sized November edition is on sale now in Japan, but the Dragon Ball Super manga is currently on hiatus so that Toyotarou can carefully craft the next exhilarating chapter. In its place, this month's issue of V Jump contains a special feature titled DRAGON BALL SUPER INTERVAL SPECIAL that breaks down and analyzes the amazing world of Dragon Ball Super! Make sure to check it out!