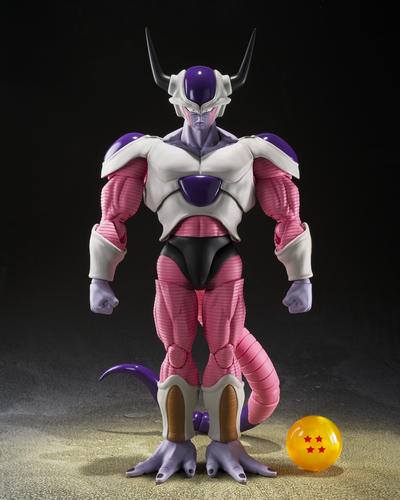 Frieza, the self-proclaimed emperor of the universe, is coming to the S.H.Figuarts series in his ferocious Second Form! In fact, preorders for this figure have already begun on the Tamashii Web Shop! This highly anticipated figure joins the ranks alongside the previous Frieza First Form & Frieza Pod and Frieza Fourth Form figures!

Figures depicting Frieza's Second Form are actually quite rare! This might be because the transformation appeared in the original Dragon Ball manga for only a short period from Tale 296 to 302, a total of six chapters.
Read on for a photo-filled breakdown that recreates all the unforgettable scenes that Second Form Frieza managed to steal during his limited time in the limelight!
Those who make it all the way through this article will also be rewarded with some tantalizing new info...! 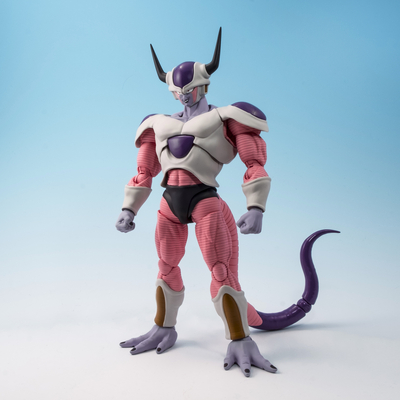 Witnessing Frieza's imposing stature recreated in real life makes it easy to understand how he managed to intimidate his foes without so much as lifting a finger! Even Krillin, a fighter who had fought to save the Earth several times by this point in the story, took one look at this transformation and the evil aura it emanated and immediately exclaimed, "It's out of a nightmare!"! This figure boasts a height of approximately 190mm, meaning that it will tower over other figures just like Frieza towered over our heroes in the original series! 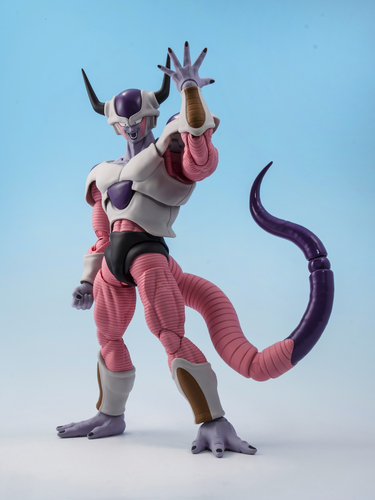 Take a close look at the incredible detail on this figure. Frieza's muscular arms look ready to send Vegeta and the others flying with the slightest effort! His legs, thick as tree trunks, look like they wouldn't budge an inch from even the fiercest attack, and his horns are perfect for puncturing any unsuspecting, smooth-headed Earthlings! His upper-body is perfectly crafted, with shoulders so broad they could support an entire galactic empire! 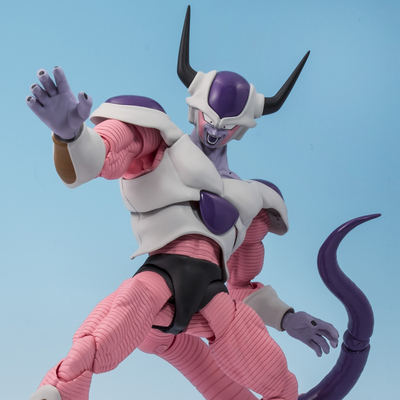 This photograph was taken from the perspective of a fallen Gohan, and despite being terrifying, you can't help but admire the high-quality modelling of this figure. The S.H.Figuarts series is famous for its intricately poseable figures, but the harmony between the muscles and joints really makes Frieza Second Form stand out. Even when you pose the figure in a wide stance like the one in the picture above, there are no awkward gaps or jarring portions around the legs. The moveable parts under the shoulder pads have also been carefully calculated and designed so as to minimize visibility and provide a natural look! 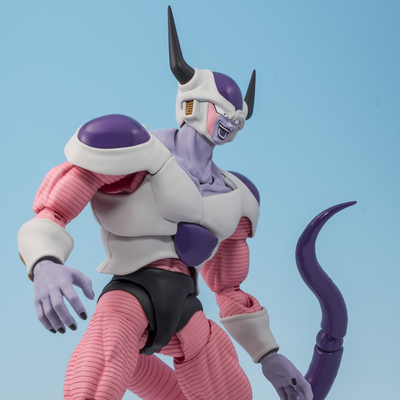 Lord Frieza likes to express himself using his tail, and this figure has a poseable tail to allow just that! It has three adjustable parts including its base, so you can move and pose it as you please! You can tell that Frieza is ready for battle from his raised tail and the blood-thirsty expression on his face! 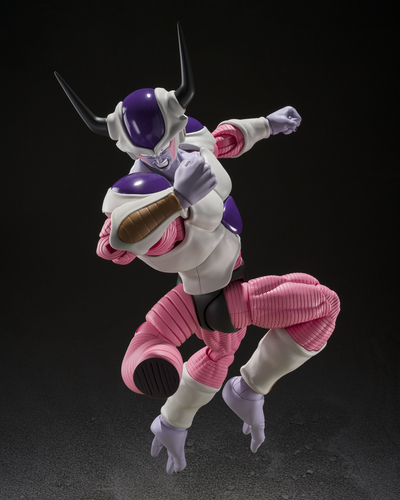 In the original series Krillin gets some sweet payback by cutting off part of Frieza's tail with a well-timed Kienzan, and a special part is included so that you can recreate that look as well! You can tell that the people that designed this figure put a lot of thought into the tail parts! 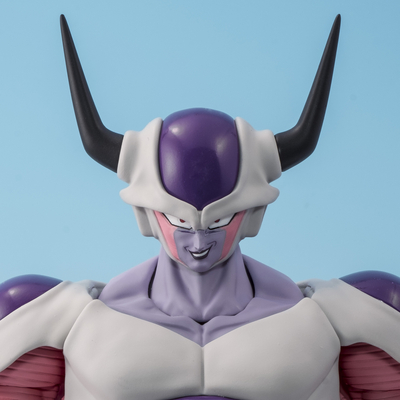 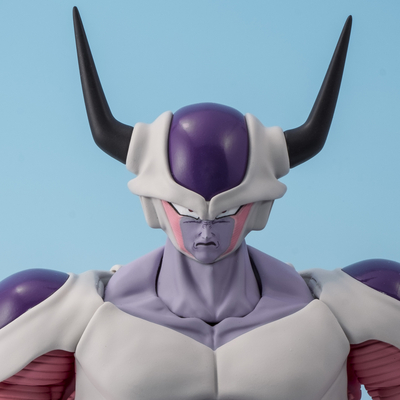 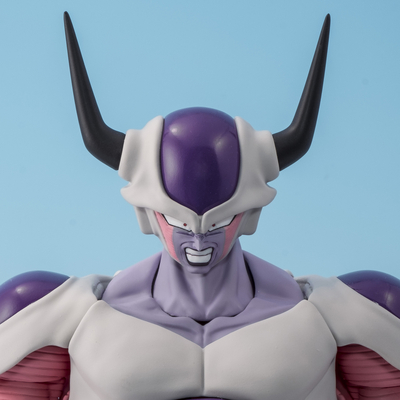 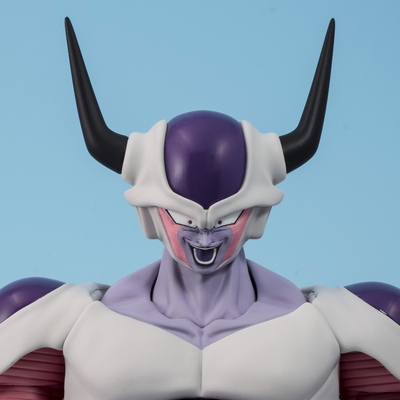 Frieza Second Form comes with four face parts that can be switched to allow for a variety of facial expressions. Trying each of them out reminded us of how expressive Lord Frieza's face can be, and the quality of these parts is so high that you can almost hear the tyrant's famous lines from the anime when you look at them!
Our favorite is the one where his mouth is agape with menacing laughter! Only Lord Frieza could make the act of laughing so terrifying! The figure even faithfully recreates the lines and muscles around his mouth to show just how much he enjoys laughing at and taunting his powerless foes. How diabolically marvelous!

Combine with Other Figures to Perfectly Recreate Famous Scenes! 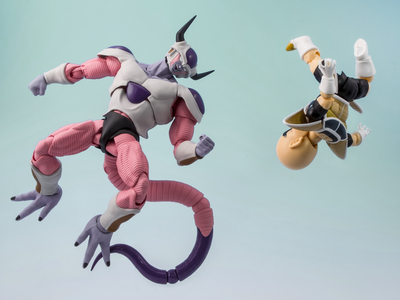 We borrowed the S.H.Figuarts Krillin -Battle Armor- figure that's set to commence shipping in October of this year to get this dynamic shot recreating one of the many unforgettable battle scenes from the original series! This photo perfectly showcases the wide poseability, wonderful sculpting, expressive features, and full 190mm stature of the Frieza Second Form figure! 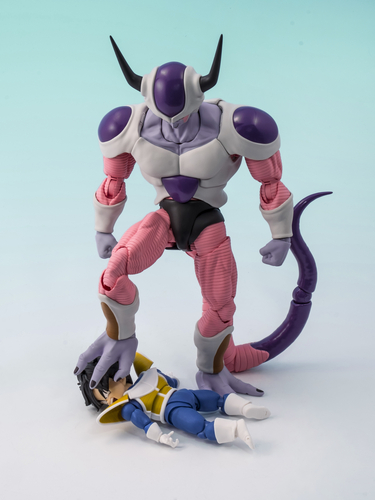 Pairing Second Form Frieza with the S.H.Figuarts Gohan -Battle Armor- figure that's set to be released in September of 2022 allows you to recreate the horrifying scene where Frieza tries to stomp the life out of the young half-Saiyan warrior! 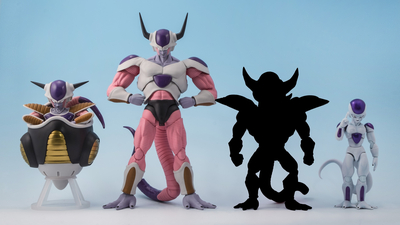 Here's a group shot of all three Frieza forms in the S.H.Figuarts series thus far.
...Hey, wait a second! Just whose sinister silhouette could that be?!

We can't wait to see what S.H.Figuarts has in store for us in the future!
Once again, pre-orders for S.H.Figuarts Frieza Second Form have already begun, so make sure to get one of your very own!

*Images shown in this article may vary from the actual products.