[October 2022] Toyotarou Tried to Draw: That Guy Who Works Under General Blue! 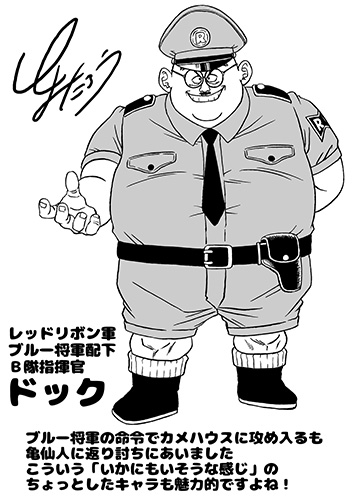 Red Ribbon Army
General Blue's Regiment
Captain of B Company
Dock
Captain Dock was taken out by Kamesennin when General Blue
ordered his company to launch an attack on Kame House.
These kinds of side characters who look like they could exist in real life
have their own kind of charm, don't you think?
——Toyotarou

This is a special monthly series where we feature sketches drawn by Toyotarou, the creator of V Jump's ongoing series Dragon Ball Super!
This month's illustration is Captain Dock, who's the commander of B company under General Blue!

While General Blue pursued Goku as the leader of A company, Captain Dock was left behind to lead B company. He mistook Kamesennin as a scientist and demanded he make him a Dragon Radar.

The Dragon Ball Super manga is on temporary hiatus in order to prepare for the next exciting chapter, but don't worry! In its place, V Jump's super-sized December issue has the next installment in a special feature series titled Dragon Ball Super Interval Special that takes an in-depth look at the amazing world of Dragon Ball Super. You'll definitely want to check it out!