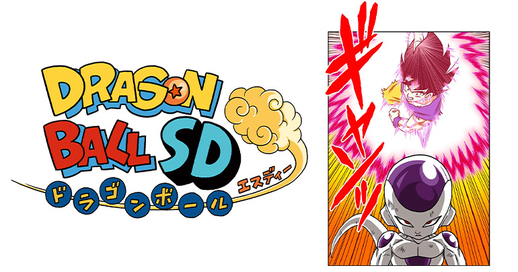 "Dragon Ball SD" is a light and playful full-color comic series starring chibi-fied versions of Goku and his friends fighting their way through battles packed to the brim with gags and hilarious moments! The latest chapters will be available to watch on the Saikyo Jump YouTube channel from Friday and Saturday, October 28th/29th!

In last month's episodes #27 & #28, "Battle of Unimaginable Powers!!", the fight between Goku and the galactic emperor Frieza erupted!! Now, Goku unleashes his full-force Kaio-Ken Times Ten technique against Frieza, but it doesn't seem to be enough!

Watch the intense action contained in the new episodes #29 & #30 on the Saikyo Jump YouTube channel below!!
https://youtube.com/playlist?list=PLZlMwo93TWBwFNeS3TqpYAF9RUL5I2qnK
*The featured comics are in Japanese.


New chapters are uploaded every Friday and Saturday at 16:00 (JST) for you to revisit all the epic tales Goku fought through in his youth and beyond!

Check out all of chapter 1 below!!