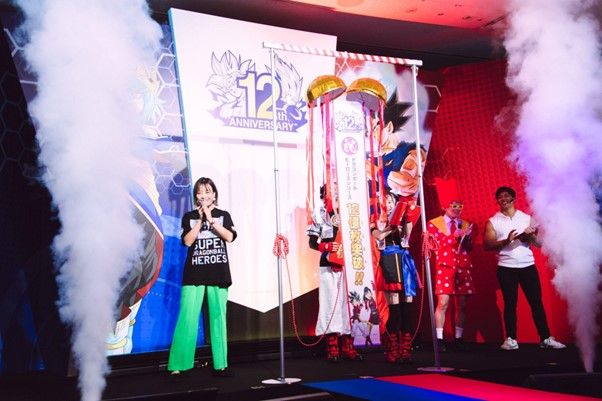 Dragon Ball Heroes is a series where fans can enjoy intense Dragon Ball battles in the form of a digital card game. This year, the series celebrated its 12th anniversary—and over 1.2 billion cards in circulation—with the Anniversary Festival event on October 23rd.

The first part of the Anniversary Festival was a segment where tons of new info was dropped about everything SDBH, from new cards to other related products! And after that in part two, fans were able to watch representative players from east and west Japan go head-to-head in Ultra God Mission Championship 2022 to determine the nation's top players!
Our reporters were stage-side for the entire event to bring you this writeup on all the awesome announcements along with the hype they generated among fans at the venue. If there's anything you read that you want to learn more about, be sure to check it out in the video archive! 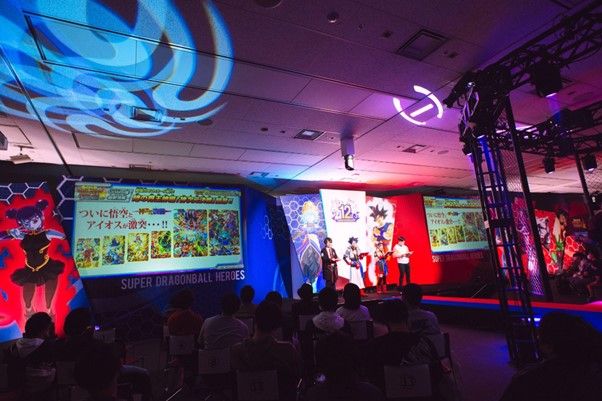 50 lucky groups of fans were invited to attend the event via a lottery.
Flanking the main stage were enormous panels featuring artwork of characters from the series.

An array of special cards celebrating the 12th anniversary of Dragon Ball Heroes were revealed at the Anniversary Festival!

First off, this year's Anniversary Secret Rare Card (ASEC) features artwork inspired by the manga cover art of Dragon Ball Volume 1, complete with the comic-style title logo! There's also an incredibly rare Parallel Card version of the ASEC in the set, but if you want to see what that looks like, you'll have to pull it for yourself! 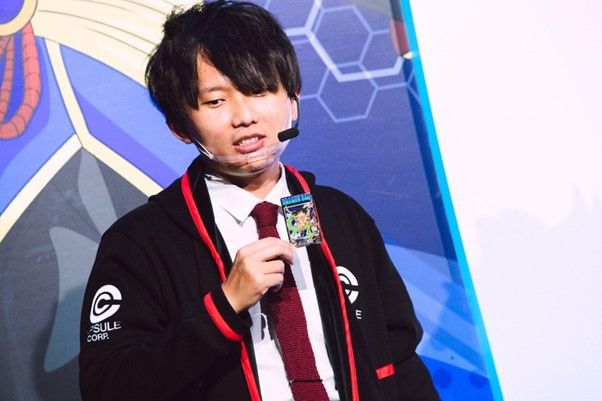 The hosts unveiled a physical copy of the ASEC at the event! Check out the video if you want to see how it shines!

Also in celebration of the 12th anniversary was the debut of a new kind of Parallel Card called a "Dramatic Art Card", two of which were revealed on stage!

The first was a Parallel Card version of Goku (UGM5-CP1), which depicts Goku awakening his Super Saiyan Form against Frieza during their fateful duel on Planet Namek. The Dramatic Art Card gives fans a new, unique perspective on the scene by framing the shot to be from behind Frieza, looking up at Goku in his furious Super Saiyan form.

The second parallel card revealed was Krillin: Youth, which captures a scene from his early days training alongside Goku under Kamesennin.
Both of these Dramatic Art Cards also feature unique white borders inspired by manga chapter title pages! 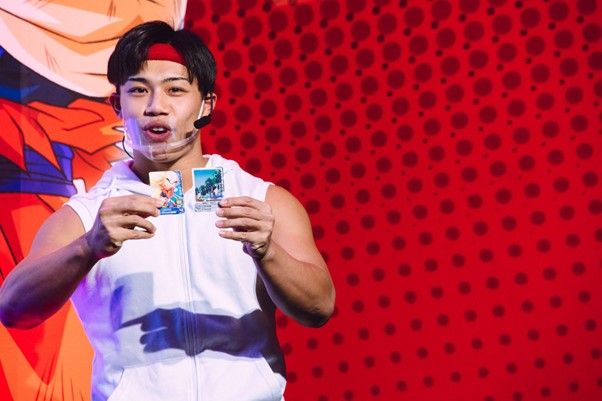 Winners of the fan illustration contest were announced on the special broadcast stage! In the Illustration Tenkaichi Budokai, entrants were allowed to draw any character they wanted on the condition that they've appeared in Super Dragon Ball Heroes—and indeed they did! From an incredible 1,113 artistic entries, five talented winners, including the winner of the grand prize, were selected at long last by the judges.

The winner of the Heroes Grand Prize was entrant Miribaru's creation simply titled "12th Anniversary!"
This fantastic piece along with some of the other wonderful entries are scheduled to be posted for your viewing pleasure on the special 12th anniversary-themed online lobby, so be sure to check them out! 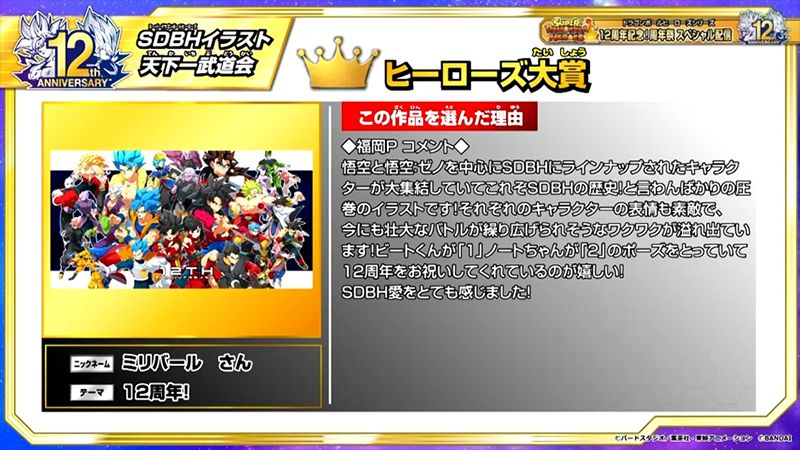 A whole range of official merch and collaboration products have been released to celebrate the 12th anniversary! Among them is the incredible limited "SDBH 12th ANNIVERSARY SPECIAL SET - Two Powers Become One -" from Premium Bandai.

This is a special SDBH set that contains seven exclusive cards revolving around the theme of "Two Powers Become One", a CD containing songs inspired by Ultra God Mission, stunning artworks (revealed below on the Anniversary Festival stage), and more! 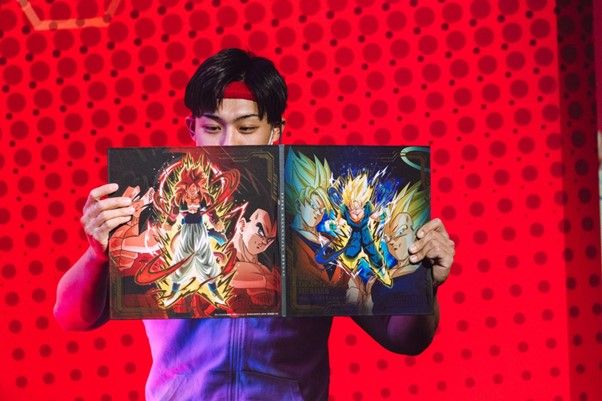 "SDBH 12th ANNIVERSARY SPECIAL SET - Two Powers Become One -" is on sale for 9,900 yen (tax included).
You'd think the crowd was about to go Super Saiyan with hype when these amazing art boards were revealed! 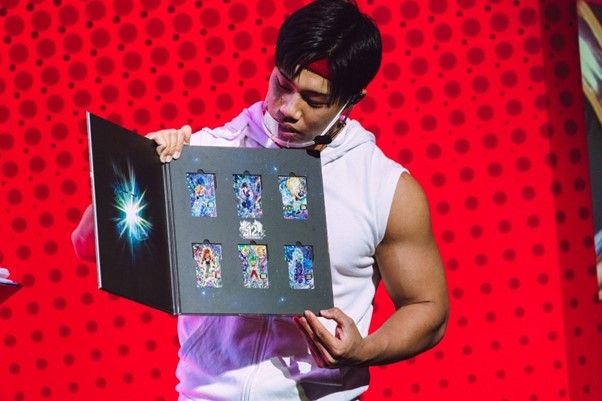 The open space on the left page is reserved for what was hinted to be the "world's strongest" card...
...Which was later revealed to be Vegito: Candy!

A special tournament for the 12th anniversary titled "12th ANNIVERSARY SPECIAL MATCH" has been confirmed for Jump Festa! Online qualifier events will be held in twelve locations all across Japan for competitors try their hand at earning a spot in the tournament based on their number wins. The qualifiers will be kicking off on November 14, so mark the date if you think you've got what it takes!

The tournament proper will also feature special rules revolving around the number 12 for the 12th anniversary! This will affect the kinds of cards that competitors can use, so expect to see entirely new strategies and deck compositions as a result! If you want to know more about the tournament rules, be sure to check out the official tournament website. 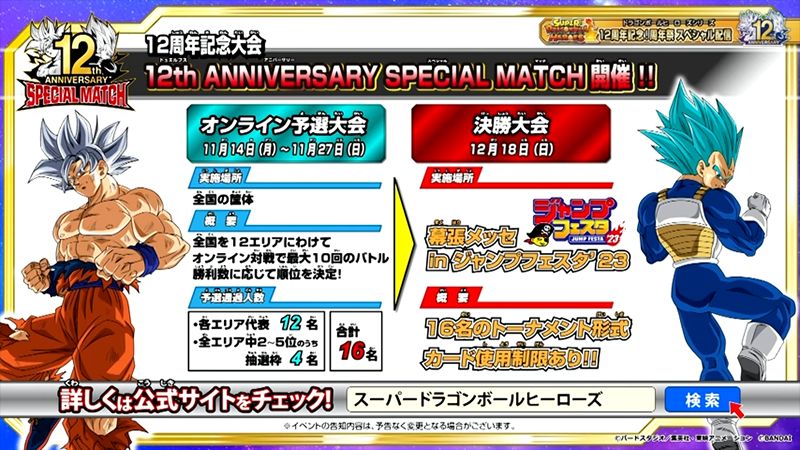 Even the SDBH celebrities are powering up for the 12th anniversary with some new additions to the cast! This time, Battle Navigator Leo and a new recruit at the Super Dragon Ball Heroes Research Institute named Dr. Marco took to the stage to announce some exciting new info! 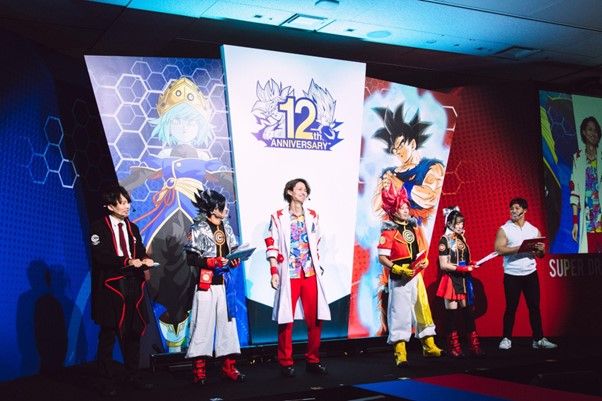 Look forward to seeing more of Dr. Marco in his lab coat and the fiery Leo with his trademark Super Saiyan 4 Limit Break hair! 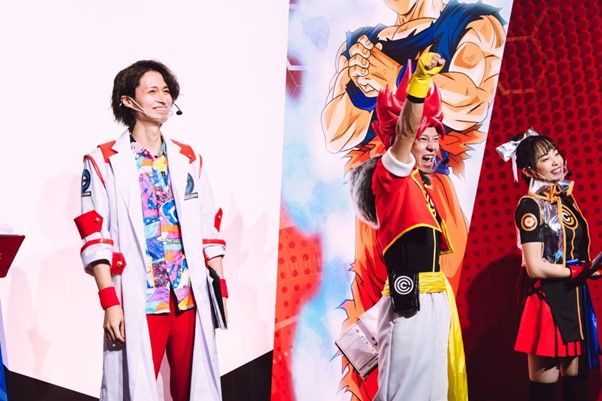 "Let's smash through our limits!"—Leo

Tons of new info on the SDBH Ultra God Mission #5 set that launched on 11/10 was also dropped on stage at the event! Let's take a look at the 8 super-powerful UR cards!

From the promotional anime's Supreme Kai of Time arc comes Goku, Aeos, and others! Plus, with the recent appearance of Cell, we're also getting a new UR Cell card with artwork inspired by one of his scenes in the original series! 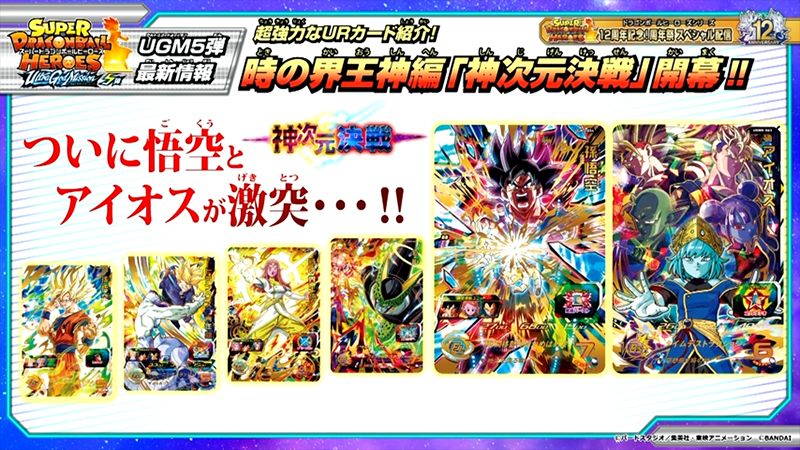 And from the movie Dragon Ball Super: SUPER HERO come UR Gamma 1 and Gamma 2!
Check out the way their artwork recreates memorable moments from the film! 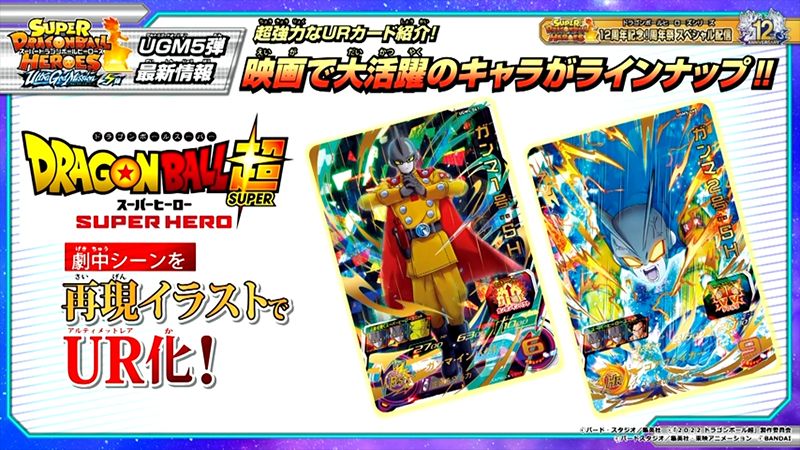 Dragon Ball Z Dokkan Battle is bringing back its SDBH crossover event! Continuing on from 2021, Dokkan players will be able to get SDBH characters in a special crossover summon! This time, Super Hearts will be newly available in the summon!

A crossover event in SDBH for UGM #6 is has also been confirmed! Cards with Dokkan Battle-style artwork and new Touch Action Abilities are set to make an appearance, so keep an eye out for them! 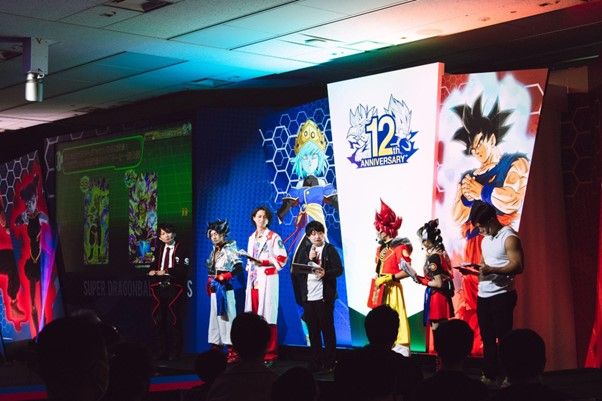 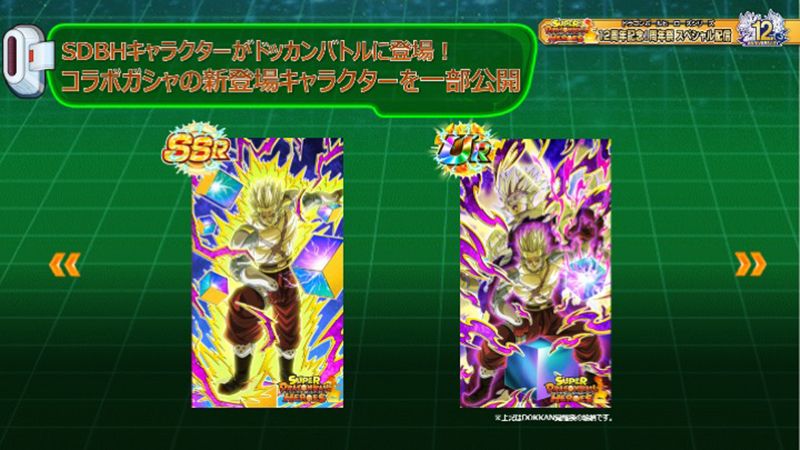 Super Heats will make their debut appearance in Dokkan Battle as the first SDBH crossover character to have a voice line.

A celebratory fan book titled the "SUPER DRAGONBALL HEROES 12th ANNIVERSARY SUPER GUIDE" was released on November 10 to coincide with the launch of UGM #5! Inside you'll find new SDBH info, decks from top tournament competitors, and tons more! The book also comes with three bonus cards from the Cell arc: Cell, Goku, and a Dramatic Art Card of Gohan: Youth! 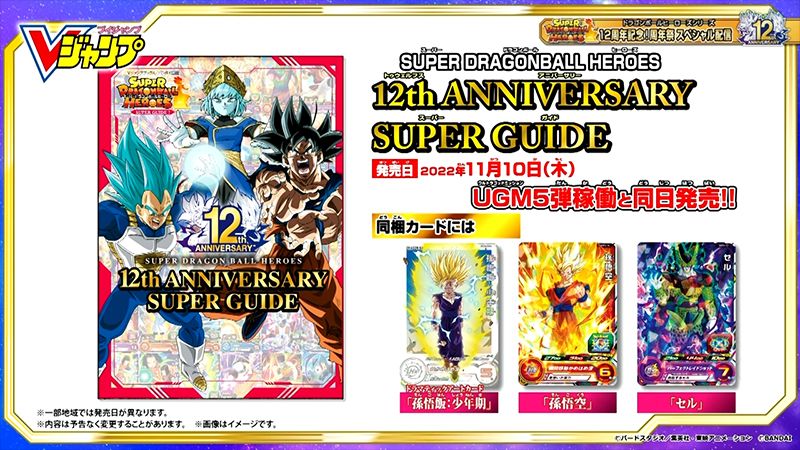 All this and tons more that no SDBH fan will want to miss can be found between the pages! Be sure to watch the video archive of the event for more details! 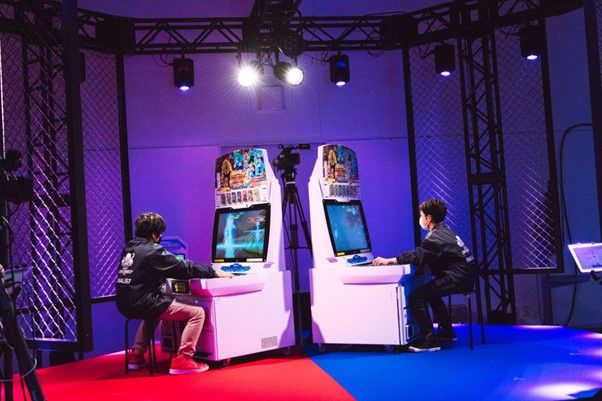 Part two of the Anniversary Festival served as the stage for the battle to decide the best SDBH players in Japan: the Ultra God Mission Championship 2022's finals! Four representatives from east and west Japan who earned their right to compete at the finals by winning qualifier tournaments held throughout Japan took to the stage for some red-hot clashes! 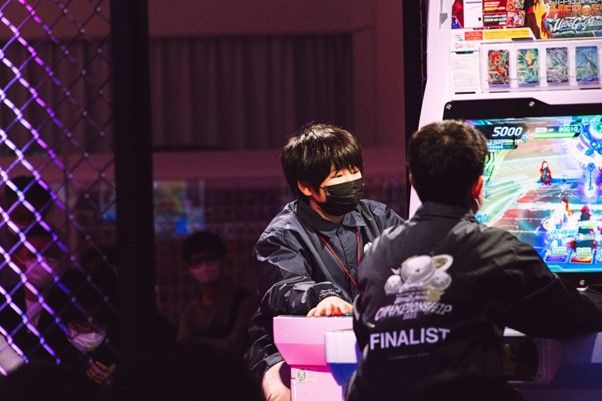 Naoya became known for using every last millisecond of prep time during the strategy phase in his battles. 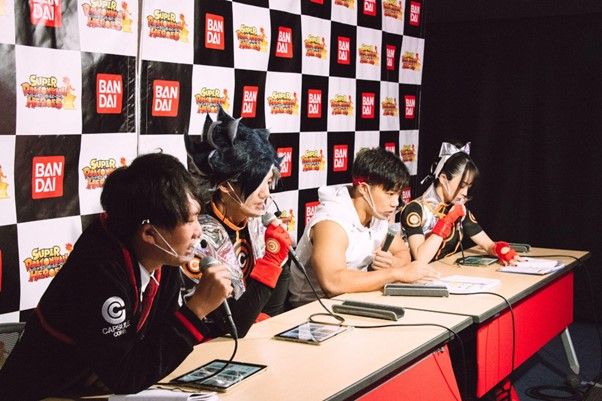 Over at the commentators' desk, SDBH celebrities provided valuable insights into competitors' decks and the back and forth of battles as they unfolded. While observing Naoya deep in thought, considering whether or not to activate his ultimate unit, the impressed commentators remarked, "He's thinking about the moves of every card that's coming out next," and "His ability to stop and think at a time like this is incredible!" The grand final of the All Ages category. On the left is east Japan's representative, Wakarin, and on the right is Kouki from west Japan. Both players looked like they were going to fall right into the screens with how close they were watching during charge impacts! Tying perfect after perfect against each other, we thought the match could have gone on forever! 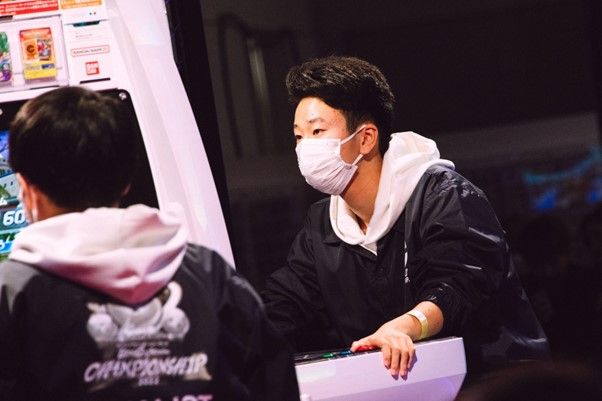 Kouki was the runner up at last year's Big Bang Mission Championship 2021.
This year, he rose once more through the finals with his eyes locked on to the top spot.

In the end, the warriors who claimed victory were Naoya in the Elementary-and-Under category and Kouki in the All Ages category! We were able to get in a few words with them after the tournament had wrapped up.

Naoya, who was up at the crack of dawn that day practicing for the tournament, had this to say: "I remember I tried entering a competition when I was in preschool. I lost, and I was told that I just wasn't on their level. From that day, I've been trying to get stronger (stronger than the guy I lost to). My next goal is to win an Adults category tournament!"
Going after a consecutive championship in a higher category?! That's pretty incredible for a 6th grader at elementary school!

Kouki, on the other hand, is now in his 3rd year of high school and barely has any time left for SDBH training in between studying for the all-important exams he's to face in the coming months. In spite of that, he still managed to make the finals!
There was a moment during his match when he was checking his opponent's deck and nodding his head up and down. When we asked what that was all about, he told us, "As soon as I saw his deck, I knew I was going to win."

During the team attack phase, he used the "Grand Finale" battle app to deal a devastating 20,000 damage to his opponent and turn the entire match on its head! He commented, "I lost at the tournament last year because my opponent was able to revive his units, so this year I came prepared to counter that. My strategy was to defend and bide my time." And that he did! With his rock-solid strategy for success, Kouki was unstoppable! 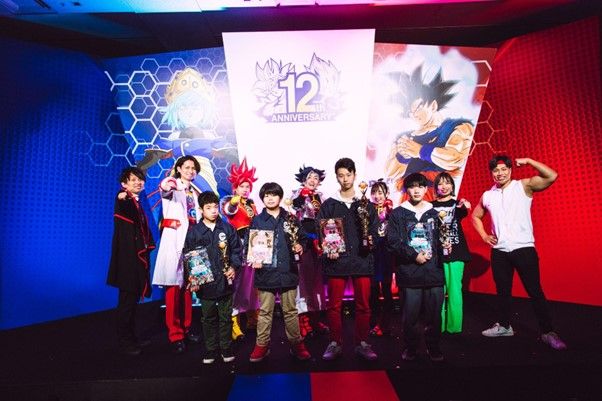 From left: Takumi, Naoya, Kouki, Wakarin. Thank you all for the fantastic bouts!

If you want to check out all the intense battles for yourself, be sure to watch the video archive below!