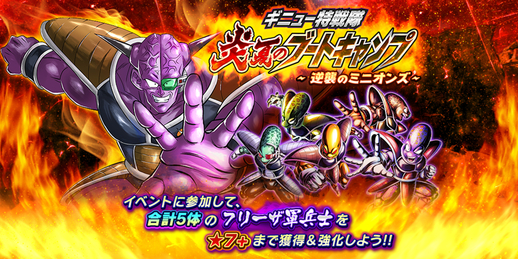 Dragon Ball Legends is an app game available all around the world, excluding certain regions. As of Wednesday, July 21st, the annual summer event "Ginyu Force: Sizzling Summer Boot Camp" has begun!!
This year, you can clear event stages to get Z Power to unlock the new EXTREME rarity characters!

EXTREME "Captain Ginyu" will get special buffs during battles in this event, and you can power him up even more by playing the "From the Original Series: The Dreaded Ginyu Force" event, whose return to the game coincides with the launch of the summer event! Plus, EXTREME Captain Ginyu can now be Zenkai Awakened! Push him past his limits and show your foes what the captain of the invincible Ginyu Force can really do!!

Have you got what it takes to clear the captain's boot camp?! Put fear aside and take on this intense Ginyu Force event!