Welcome back to "Dragon Ball-ism: Toriyama Showcase" for another in-depth look at Akira Toriyama's various short stories and one-shot works!
For our fourth article, let's hold our breath and dive into "Mahimahi the Lungfish", a work which illustrates Toriyama's love for this bizarre sea creature in his own signature art style. 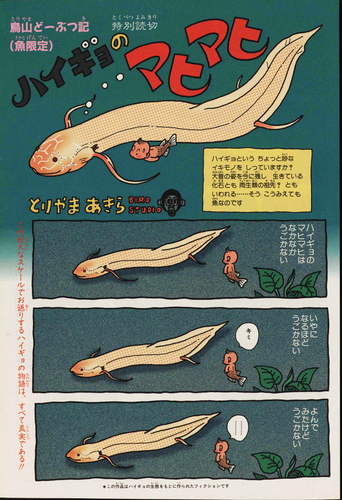 Mahimahi the Lungfish was a one-shot manga initially published under "Toriyama's Animal Chronicles". For this project, Toriyama simply observed his pet lungfish and illustrated his thoughts about its mysterious nature. Don't let that description fool you, though; the author's trademark warm and comical sense of humor is all over this manga, making it a fantastic way to learn about this unique species of fish! However, it's somewhat hard to track down due to never being released as its own comic, leading many to regard it as an elusive masterpiece.

Does This Mystical Lungfish Remind You of Someone...?!

As odd as the lungfish might be, Mahimahi has an even odder compatriot swimming alongside it: a medaka mermaid named Suisui, who studies Mahimahi intently!

The lungfish is so laid-back and carefree that it even starts to annoy Suisui a wee bit.
At the end of the comic, Toriyama even refers to Suisui as I/me!
One could argue that Suisui acts as a stand-in for the author and puts his thoughts into words. 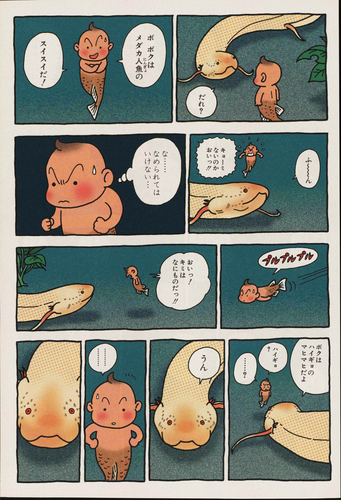 Mahimahi can breathe using pulmonary respiration, and it can even eat rock-hard shells whole!
And its poops are almost alarmingly huge.
If you give this manga a read, the lungfish's overwhelming cuteness and surreal nature might just make you want to get one as a pet for yourself! 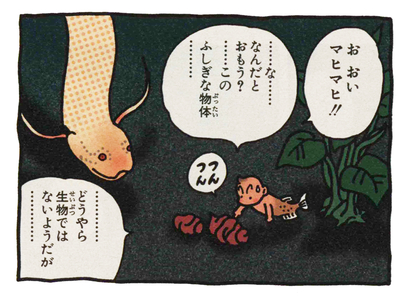 Mahimahi the Lungfish becomes even more enjoyable when perceived through the lens of a Dragon Ball fan.
When talking about the duo of Beerus and Whis during an interview for the movie "Dragon Ball Z: Battle of Gods", Toriyama said, "If there was only one of them, I'd have to resort to having them talk to themselves or use narration to deliver exposition, but with two characters, they can talk to each other in order to provide explanations without the need for a narrator. Imagine if Bulma or the others weren't around for Goku to talk to; he'd become a silent protagonist (laughs)."
Similarly in Mahimahi the Lungfish, Mahimahi's weird and wonderful lifestyle is able to be presented in a comical way to the reader since it has Suisui to talk to.
And let's not forget the Oracle Fish that lives on Beerus' planet, whose looks and mysterious disposition are strikingly similar to that of Mahimahi!

At the end of the story, there's even a special "Species of Lungfish from Around the World" section!
We can't get enough of Toriyama's adorable lungfish drawings and charming handwritten explanations.
Toriyama loves animals, and it seems he's owned a variety of pets throughout his life.
It really makes you want to see other entries in the "Animal Chronicles" series, doesn't it? 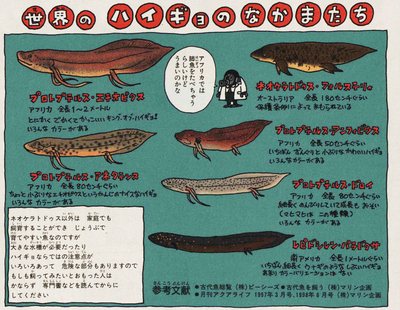