On Thursday, August 5, a new line of figures under the "Super Zenkai Solid" label are launching across game centers in Japan! We were lucky enough to catch up with renowned model designer Hiroyuki Nakazawa, who works on the series, to hear his thoughts on these figures and about the careful creation of volume 1's Super Saiyan Goku figure!

What Is Super Zenkai Solid?

"Super Zenkai Solid" is a line of figures that you can win as prizes in game centers throughout Japan. Like its predecessor, the popular "Son Goku FES!!" series, "Super Zenkai Solid" is a series of large figures that focuses on Goku and recreating his strong presence in 3D form. Their mission is to take the Goku that we all know and love and bring him to life cooler and with more detail than ever using the latest in model technology! 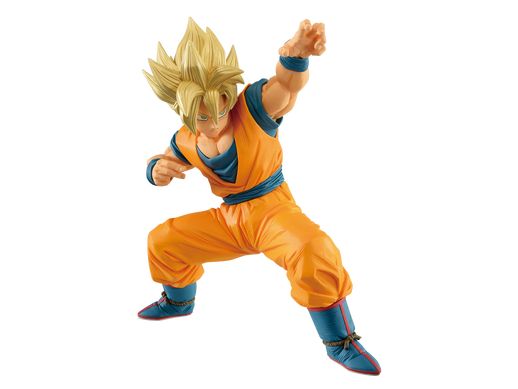 A veteran in the figure industry with over 20 years of experience designing wonderful models, including those in many Dragon Ball product lines like "Dragon Ball Z - Chozoshu" and "Model Tenkaichi Budokai", Hiroyuki Nakazawa is a man known for his craft. Following his most recent project, "Son Goku FES!!", he's now leading the charge on the "Super Zenkai Solid" series as lead model designer. 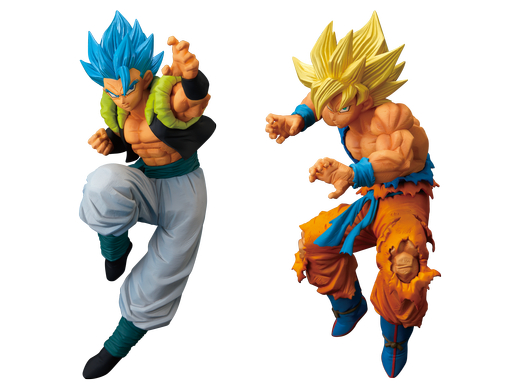 ――What was your mindset going into the "Super Zenkai Solid" series?

There are many illustrations and specific poses that people really know and love, so while working on this series I was constantly thinking that I wanted to capture those perfectly and turn them into figures. The figures are of course based on Akira Toriyama's illustrations, and so they're intended to be recreations of those drawings, following the literal lines that he has laid down for us in his art. The way Toriyama draws Goku, for example, feels very full and weighty, so in turn we designed the models to recreate that same fullness. There are many Goku figures out there, and I think that the different proportions used in their designs all carry some meaning. Thinking of them as products as well, if the figure is large but their proportions are on the slim side, they can appear to be weak or fragile, so from the consumer's perspective, the figures having that physical bodily volume to them is also reassuring. 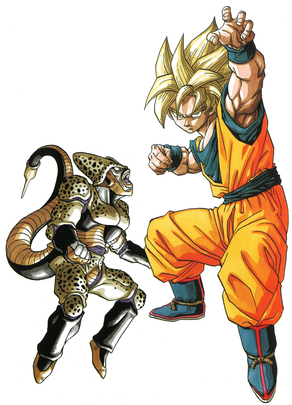 ――Is there anything that you'd say you were paying particular attention to when designing the "Vol. 1 Super Saiyan Son Goku" figure?

The first thing that I'd set my heart on was to make his facial expression exactly as it is in the comics. We're using Akira Toriyama's illustrations as our starting point, so his eyes take up a relatively large vertical space. His facial expressions in the anime are also quite different to the comics, and so we had to ask about using them, but Toei Animation were very understanding and gave us the green light. There are a lot of figures that use what you might call Goku's standard face, but I think that this different approach is also really great.
In the past when we've released figures using Toriyama's original illustrations as their design bases, people have made comments like, "This isn't what Goku's face looks like in Super Saiyan," and I think that's probably because it's not the way he looks in the anime, but I personally think it looks good! But because we've had that experience in the past, these days when we're about to start making a figure, we always determine exactly where the designs are coming from to get everyone on the same page. 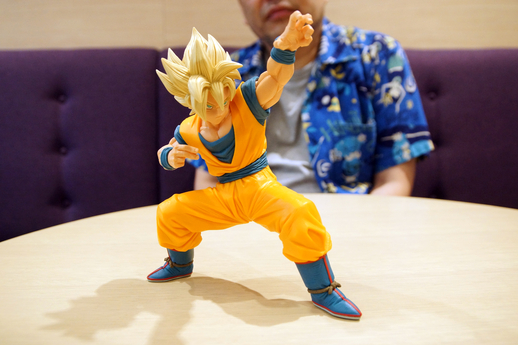 We've also stayed as close as possible to the original illustrations for the folds and wrinkles in his clothing too. The lines in the illustrations are quite sharp, and it's things like that we're looking to pinpoint as something that will stand out when we reproduce them for the figure. The illustrations are of course not like realistic life drawings either, so there are some lines that are very dynamic. As a model designer, there are things like that I'll see and think, "I really don't see how that wrinkle should look that way," but when we try it out in model form, it'll turn out looking really cool and unique. For his thighs, the originals don't have too many folds or wrinkles, so we actually had to add a couple in to avoid his legs looking too flat or sparse, but also be very mindful to not make people feel like there's more than there should be.
His knees have these unique wrinkles that I think wouldn't actually appear that way in real life, but that's exactly why we wanted to recreate them for the figure. I think the primary trend in figure design at the moment is to lean harder into reality, but I think it's also interesting to conversely lean into the original illustrations too. Some people will think that it looks a little odd, but I think if we do a good enough job at recreating the original art as figures, people will be able to see the merit in that too. 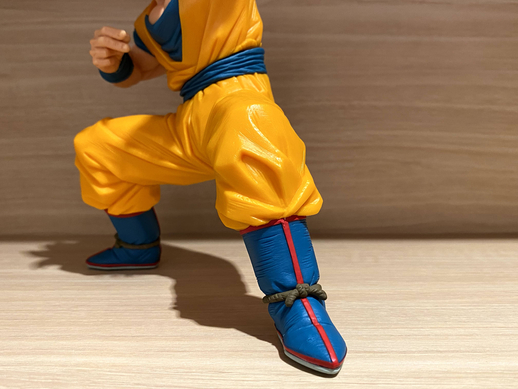 For example, Toriyama tends to draw a kind of W shaped line on the palms of characters' hands. I'm personally a fan of that, and I think when it's recreated well, it gives a unique look to the figures. I think the reason that the art style of Japanese manga and anime is so popular around the world is not necessarily for its realism, but for its ability to be convincingly unrealistic. Japanese Ukiyo-e art is somewhat like that too—it isn't what you'd call realistic, but it is highly recognized and enjoyed regardless. Personally, I try to avoid the figures I work on becoming too realistic.

――To date, you've produced dozens of Dragon Ball items and Goku figures. What areas of your work are the most challenging and what areas are the most fun?

I'm grateful to have worked on so many Goku figures, but no matter what I do, it's tough having to make the same outfits every time (laughs). When you make around 6 Goku figures a year, you do worry, "What should I do this time?", and there are times where it can be tough to overcome issues. Even if I'm using the same character or image, to make the process easier I almost never reference past designs. Just making everything from scratch is faster. For example, even with just a 0.5mm difference in wrist thickness, the whole feel can go awry. So even if it's the same clothing or pose, while keeping in mind balance and overall proportioning, I think things like, "Last time was like this, so this time let's try this!" I'm always hoping to keep things fresh and keep pushing the boundaries of my designs. On the other hand, the clients are really considerate and request models for characters other than Goku, so I'm able to keep working at my best.

As for fun things, as a fan of Toriyama, using his illustrations as the basis for my designs is a huge thrill. Also, I suppose seeing the final product after it's been officially released is great too!

――Within Dragon Ball, is there a particular panel or a favorite scene that you'd love to create in 3D?

Choosing just one is tough. I love scenes that involve more than one character, sort of like a diorama as opposed to a lone item. I really like creating scenes people can connect with, so in the past I made the scene where Goku is holding Gohan while going over to see Kamesennin. Also, even more than the mid-story stuff, I'm a big fan of stand-alone illustrations of characters riding mechas or dinosaurs. I made the "Model Tenkaichi Budokai" series in that style, but nowadays, unfortunately it's a bit hard to make those sorts of items financially viable. After that, I like casual clothing, but that's purely because up until now I've been exclusively making characters wearing their uniforms (laughs).
As for characters, I actually prefer the normal, black-hair form of Goku to the Super Saiyan forms. In fact, my favorites are the side-characters! With Toriyama's characters, for example Arale Norimaki and young Goku, it's so interesting to me when they don't look strong at first glance but are in fact super tough. Super Saiyans are already so cool and strong, so at first, they didn’t really do it for me. I only really started to love the thick Super Saiyan hair and stereotypical "shonen manga protagonist" look after I started working with them.

――Lastly, can you share a few words for all the fans out there who are looking forward to the "Super Zenkai Solid" series?

It looks more new figures will be coming to the series, so I'm going to put even more heart and soul into them! Thank you so much for your support, everyone! 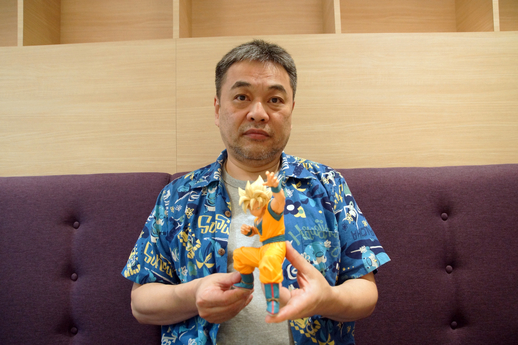 ――Thank you very much!