There's an old saying in Japan that you can't fight on an empty stomach—a philosophy that certain characters in the world of Dragon Ball subscribe to quite fervently! In this article series, we're taking a look at some of the food and drinks that appear in Dragon Ball, starting with some of the more normal items that you've probably eaten in the real world. Let's dig into some of the comics' most sumptuous scenes! Bon Appetit!

Eat Balanced Meals to Grow Up Big and Strong!

All kinds of delectable dishes are served up in Dragon Ball for us to feast our eyes on. Eating balanced meals with staple foods, mains, and side dishes is as important as any other part of a martial artist's training regimen, so you can't be a picky eater if you're aiming for the top!
Let's see what's on the menu! 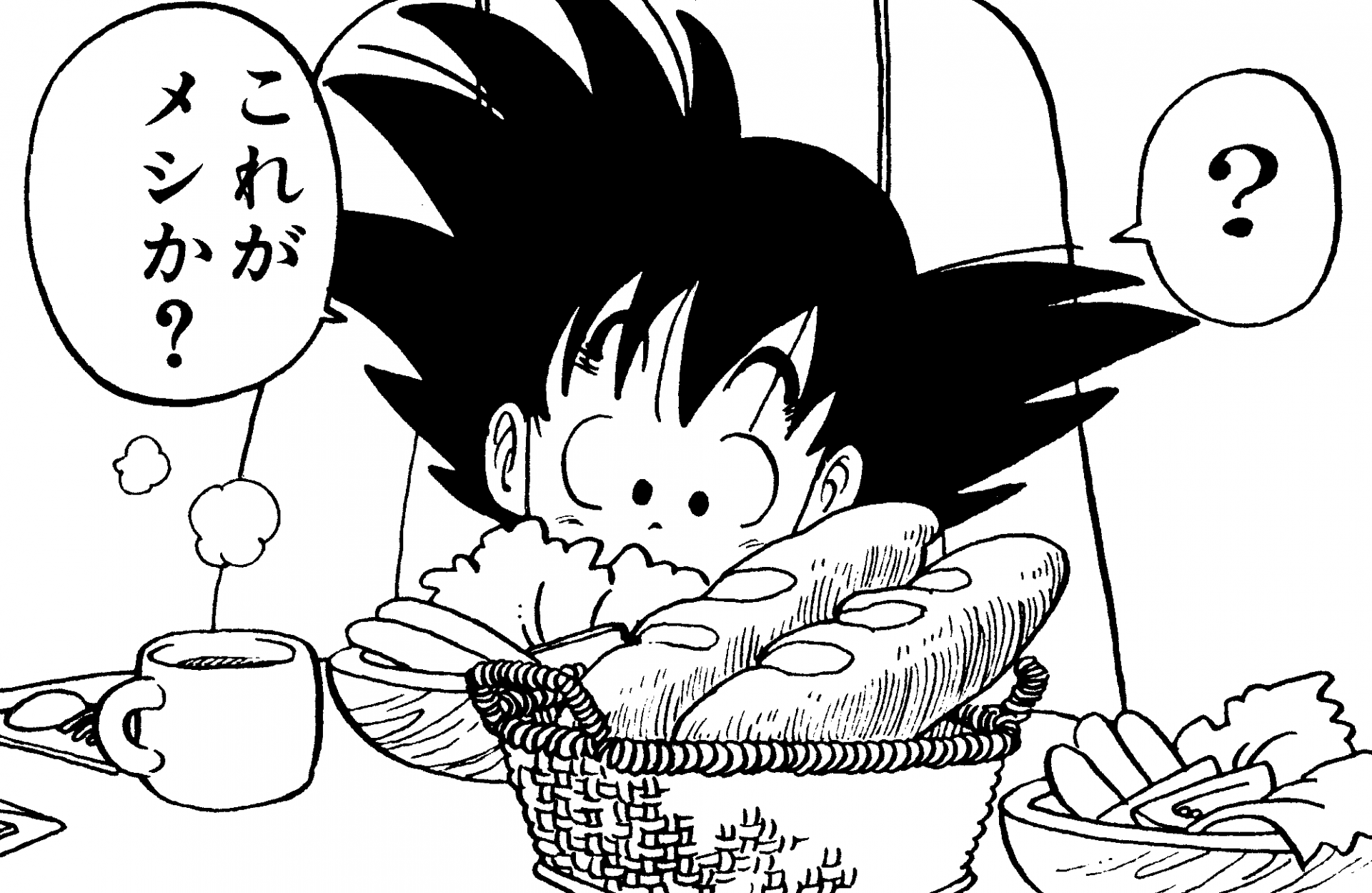 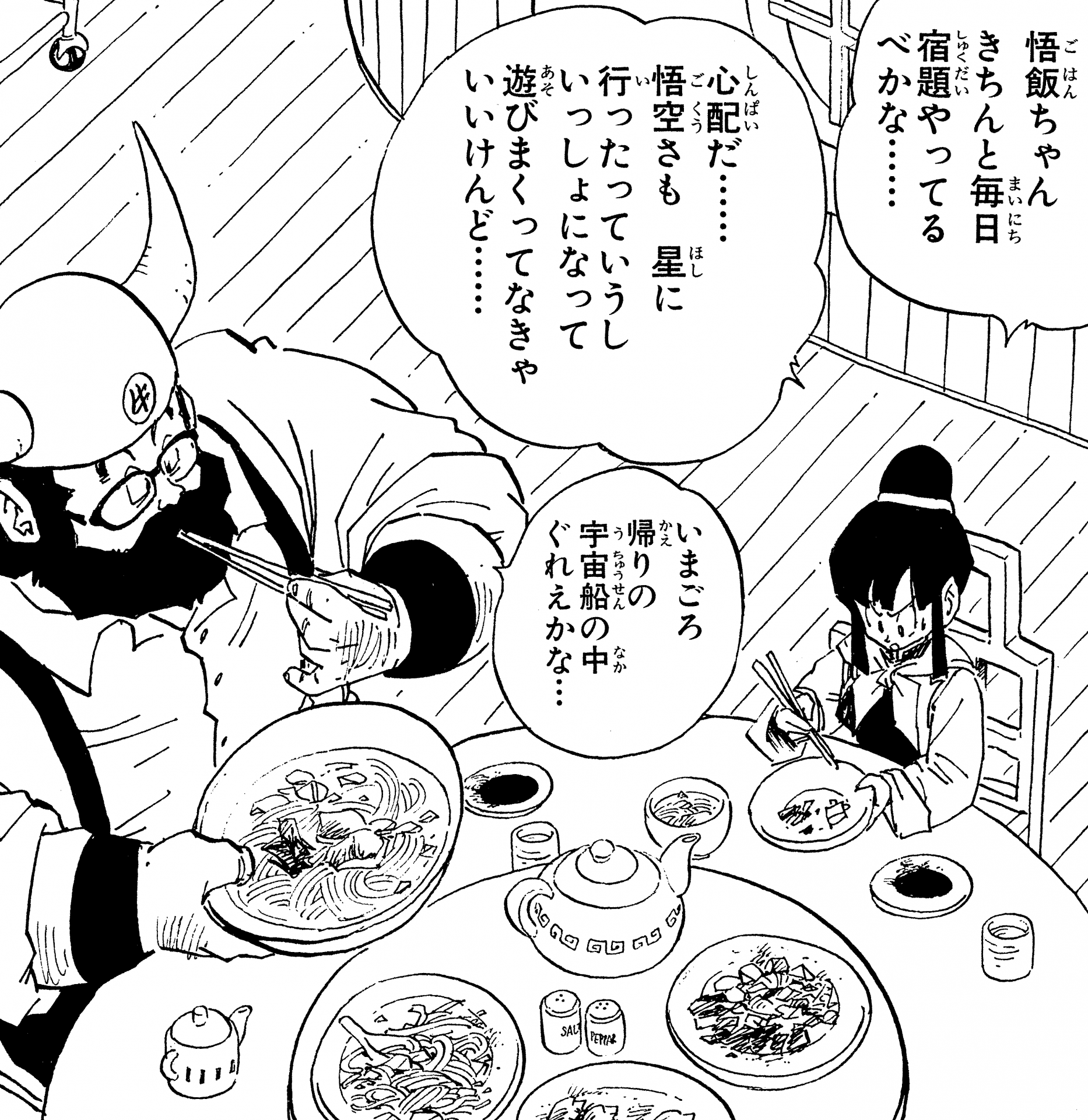 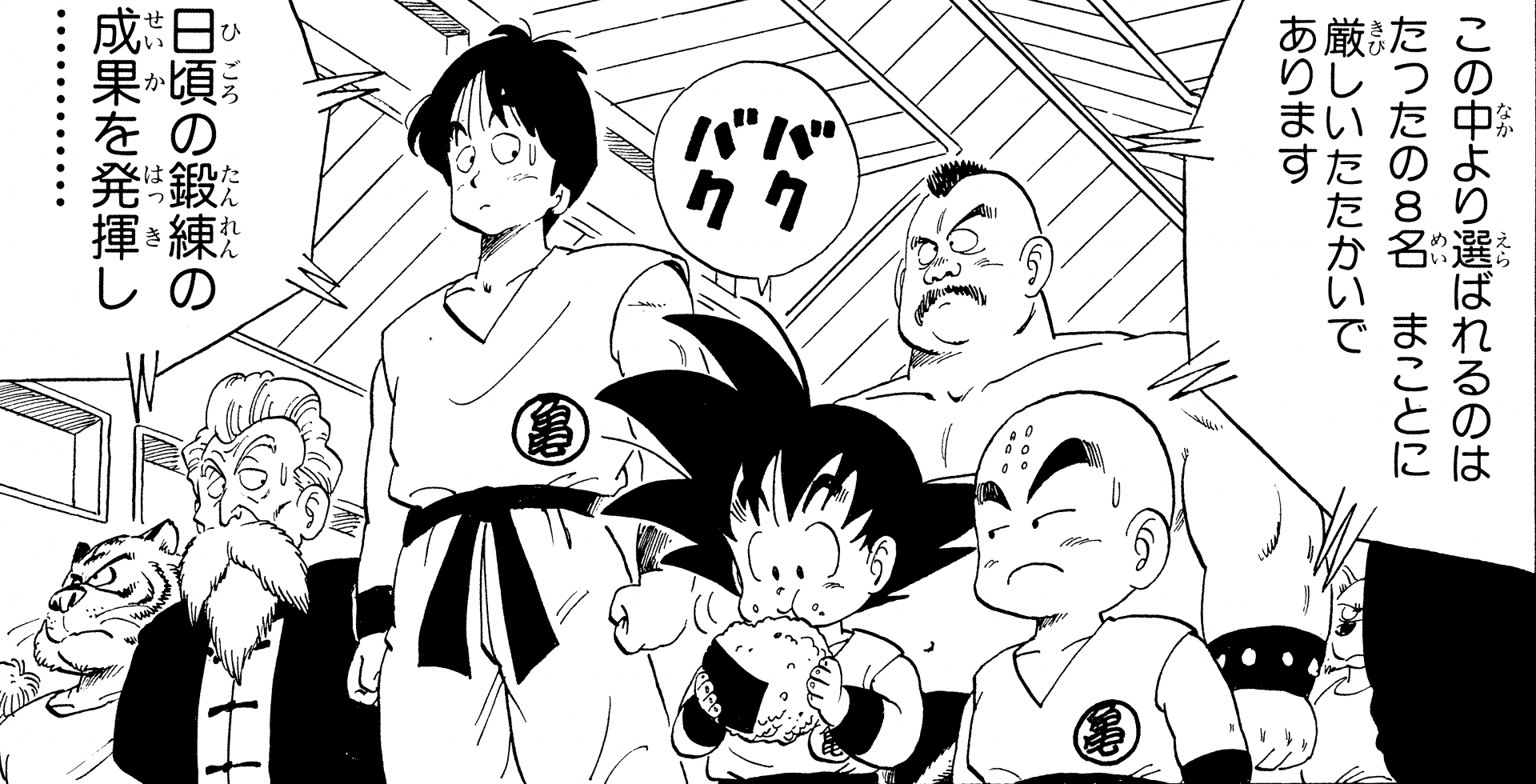 The main staple foods in Dragon Ball are rice, bread, and noodles, though it seems that the norm differs depending on where in the world a character is from. For example, Bulma, being from West City, often eats bread, while characters from south-eastern regions like Chichi, Gyumao, and Yamcha can mostly be seen eating noodles. Rice-based foods like rice balls, on the other hand, can be seen throughout the series being eaten by many different characters, so we can safely assume that rice is popular just about everywhere. 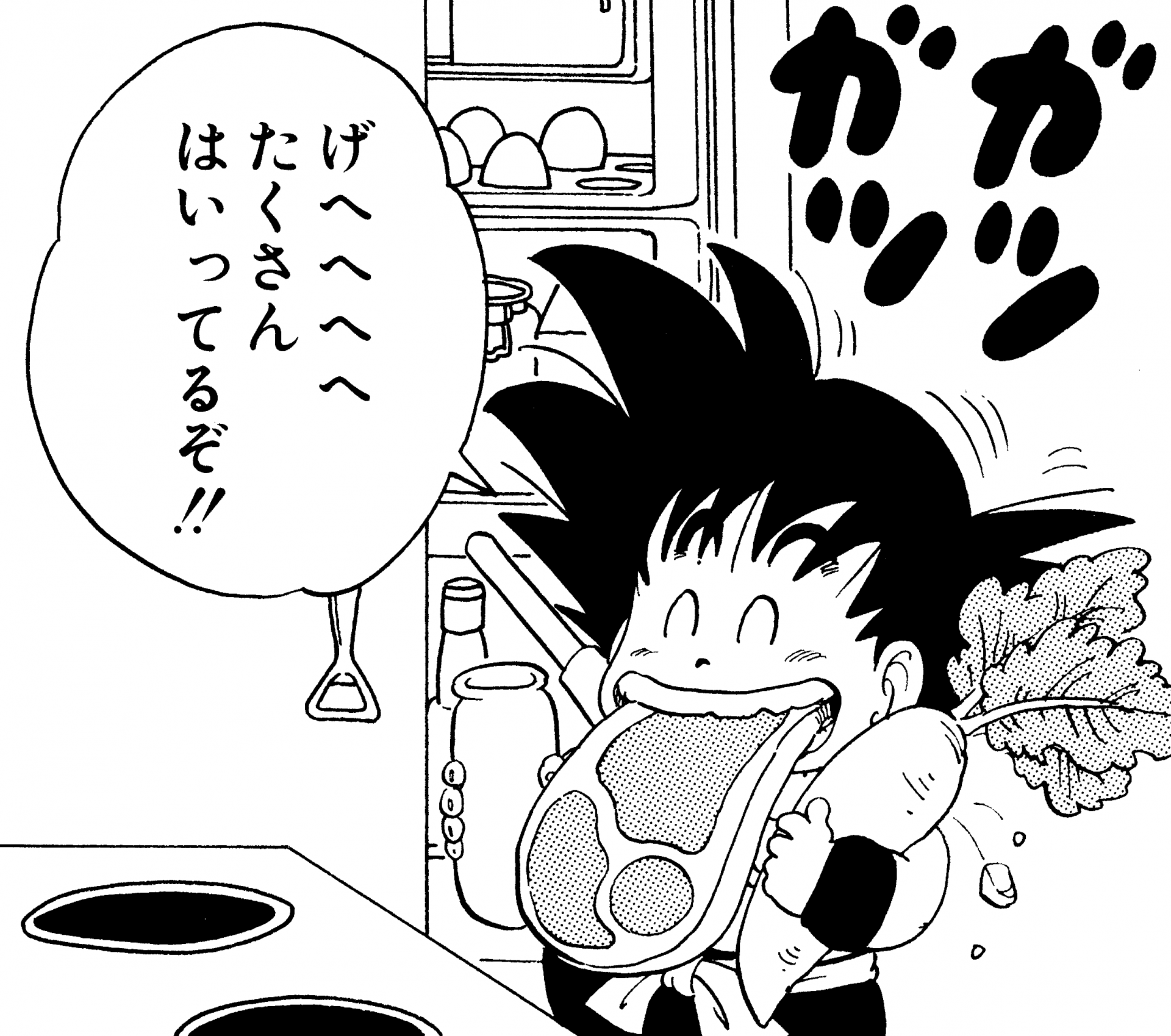 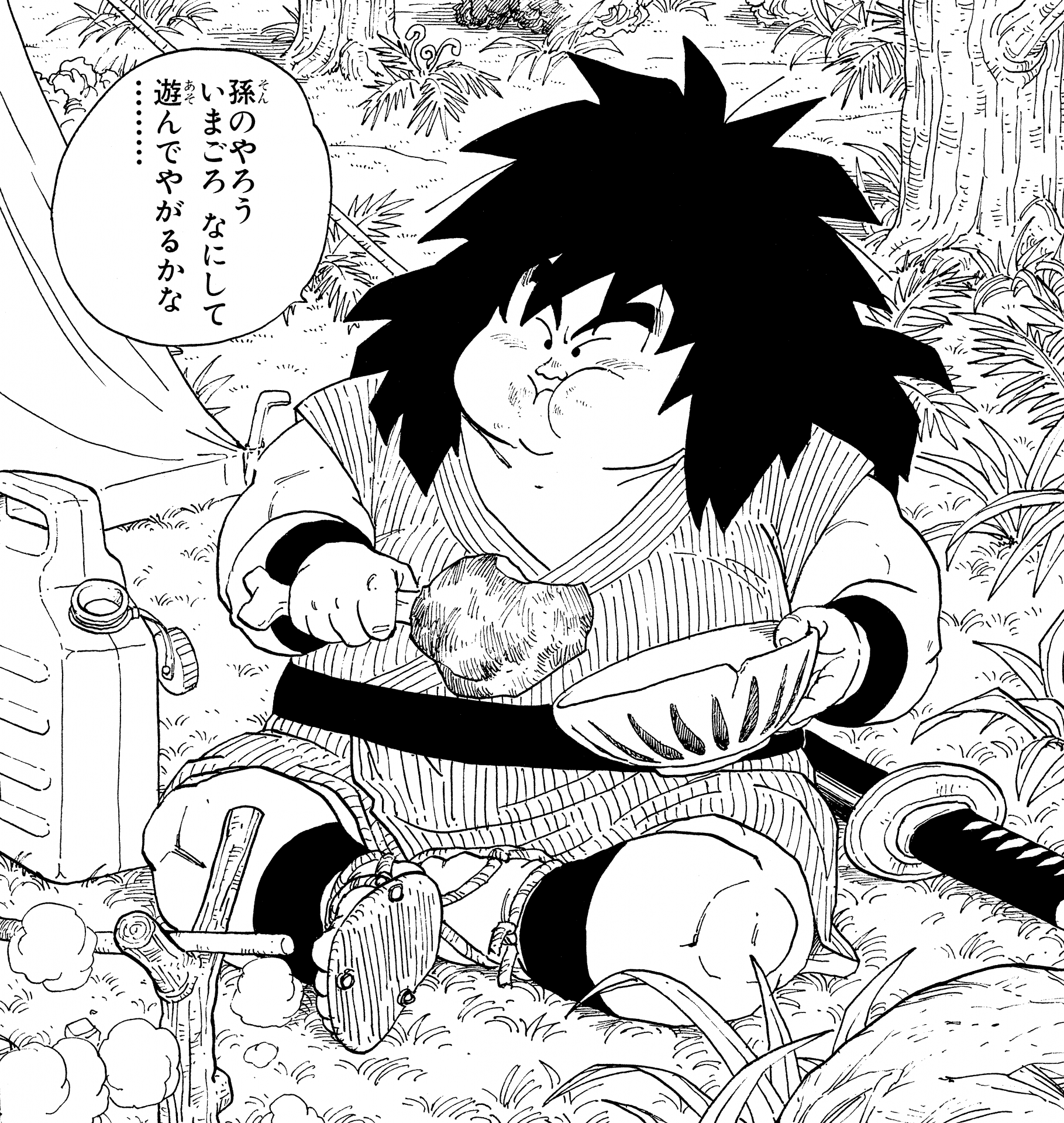 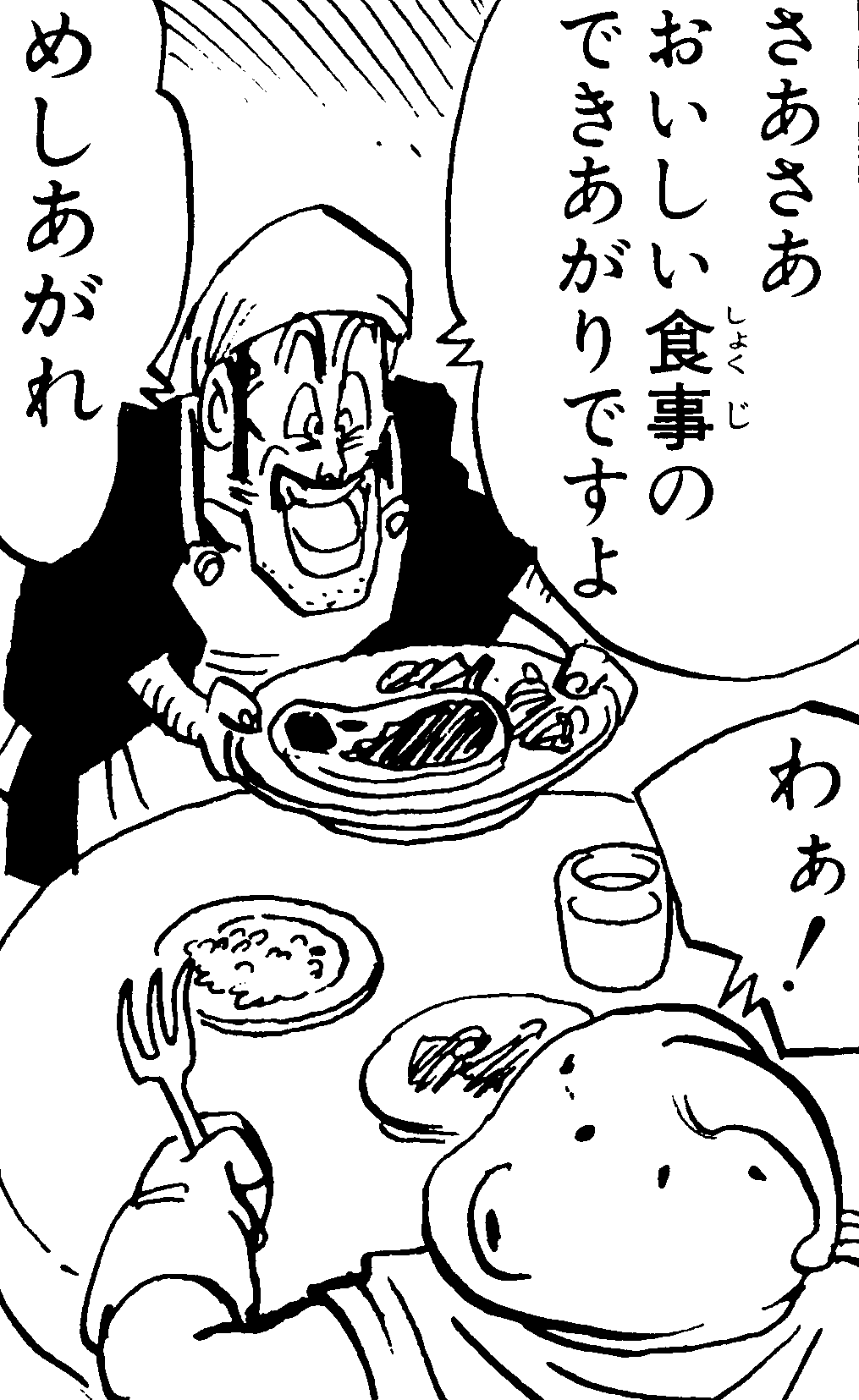 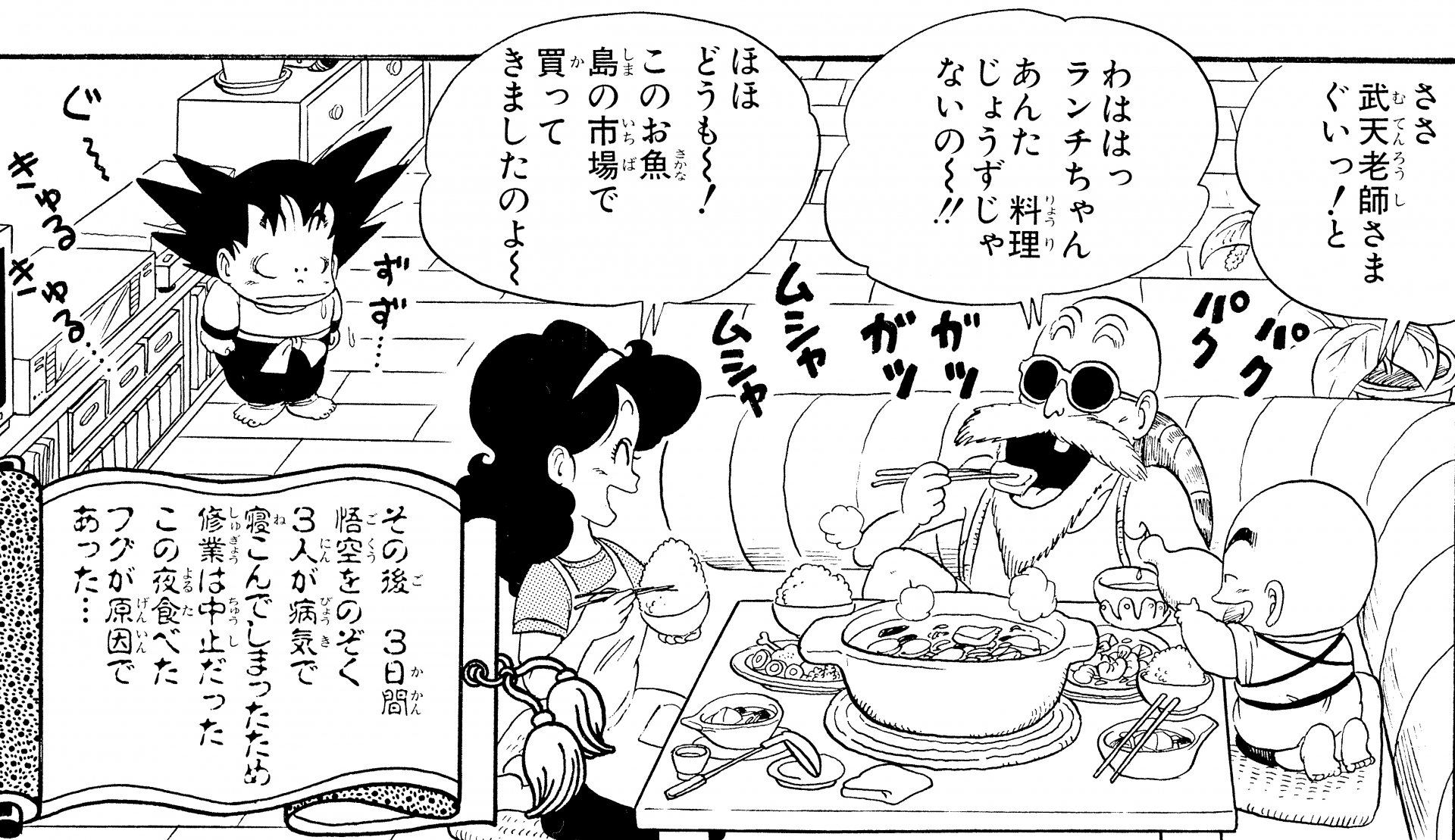 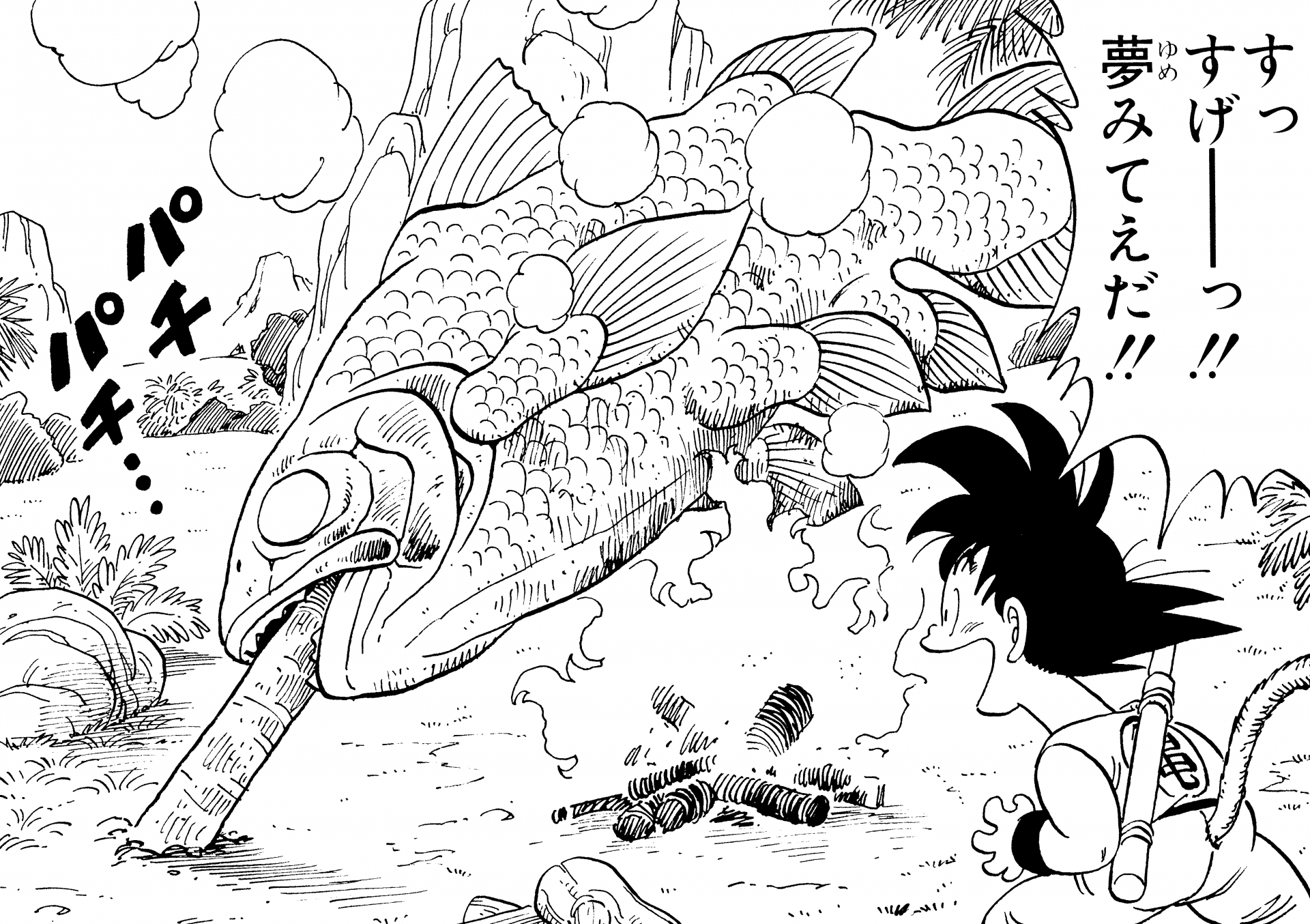 The culinary centerpiece of a meal in Dragon Ball is meat, meat, and more meat! Sizable steaks, legs and shanks on the bone, and humungous fish over an open flame or served in a hot-pot soup! The characters' love of food can be seen in the way it is prepared and presented, and even those with more of a taste for the wild like Goku and Yajirobe will at least cook their meals camp-style before scarfing them down. 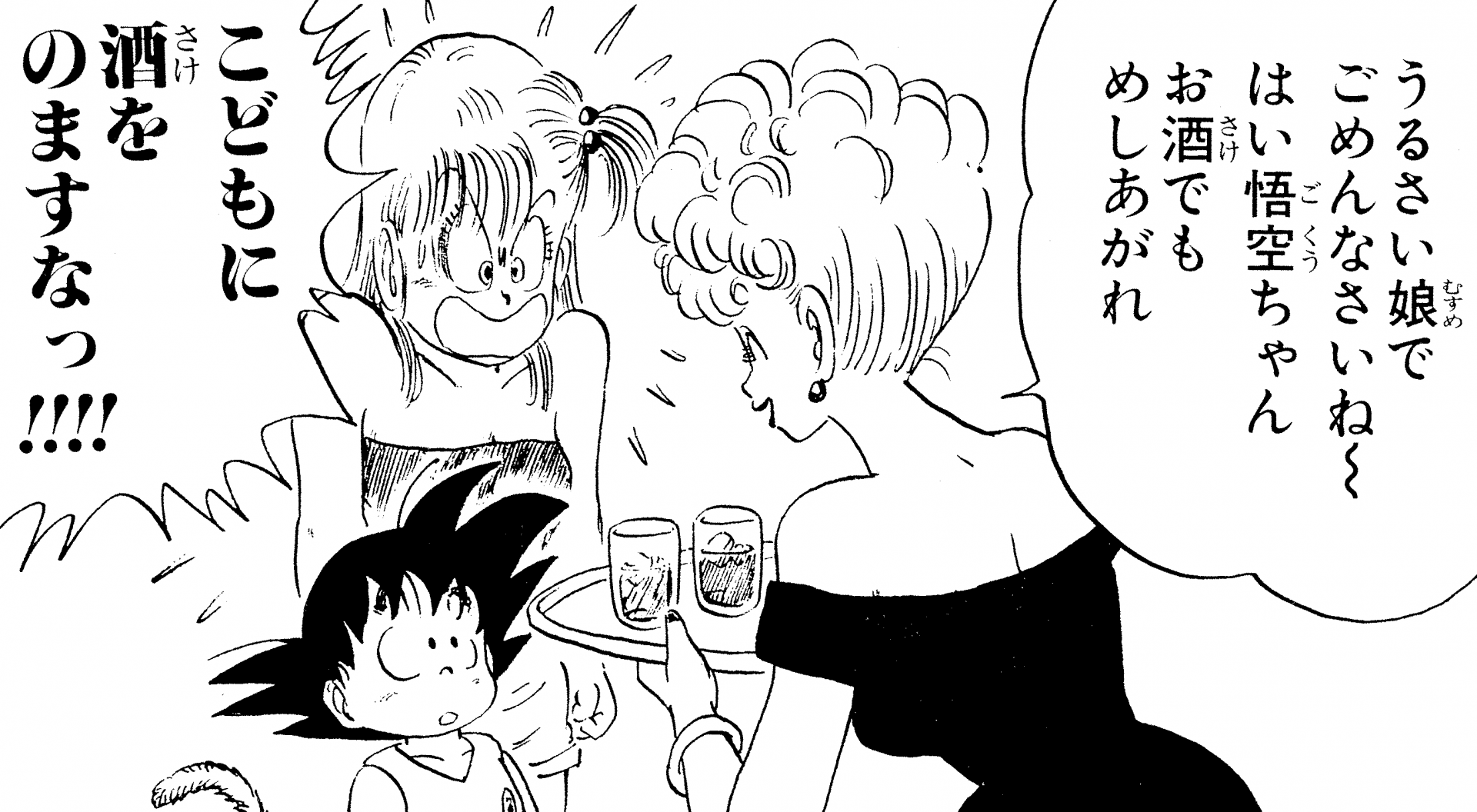 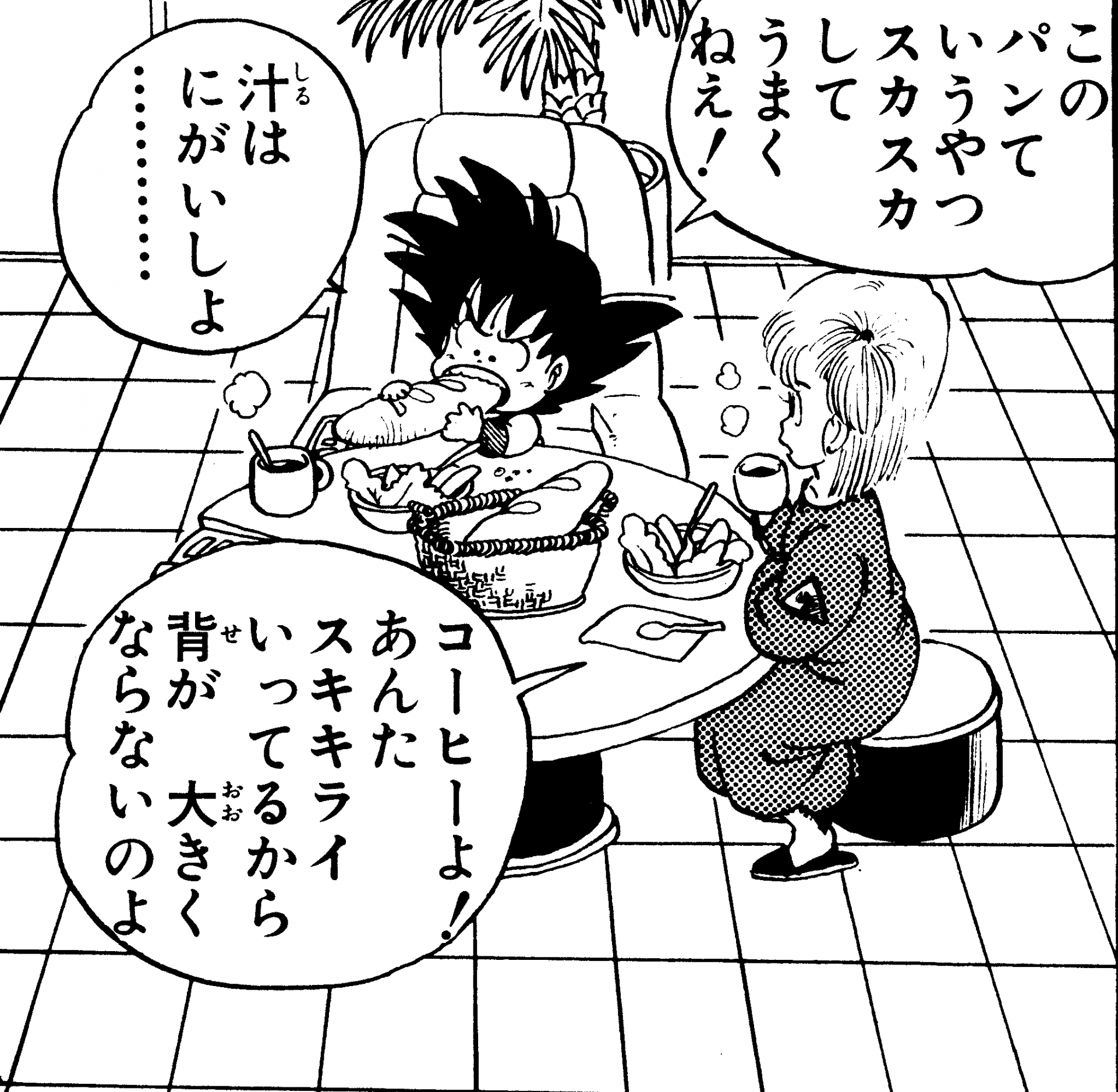 A large repertoire of refreshments also appears in the series, including coffee, cream soda, and even something a little stronger from time to time. Milk is also quite popular, with some regions even having such high demand that it gets delivered by helicopter!

Are All Saiyans Gluttons?! 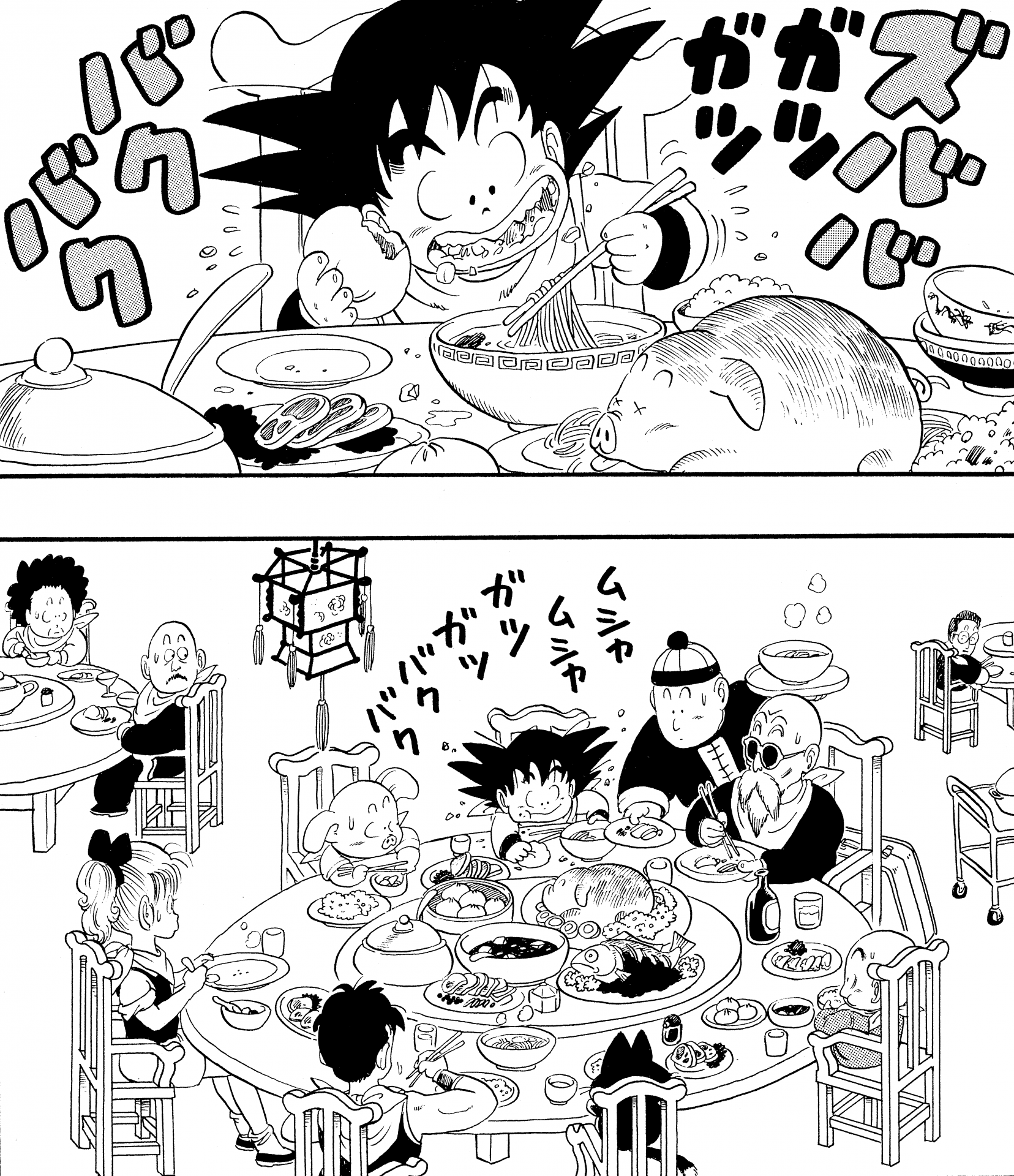 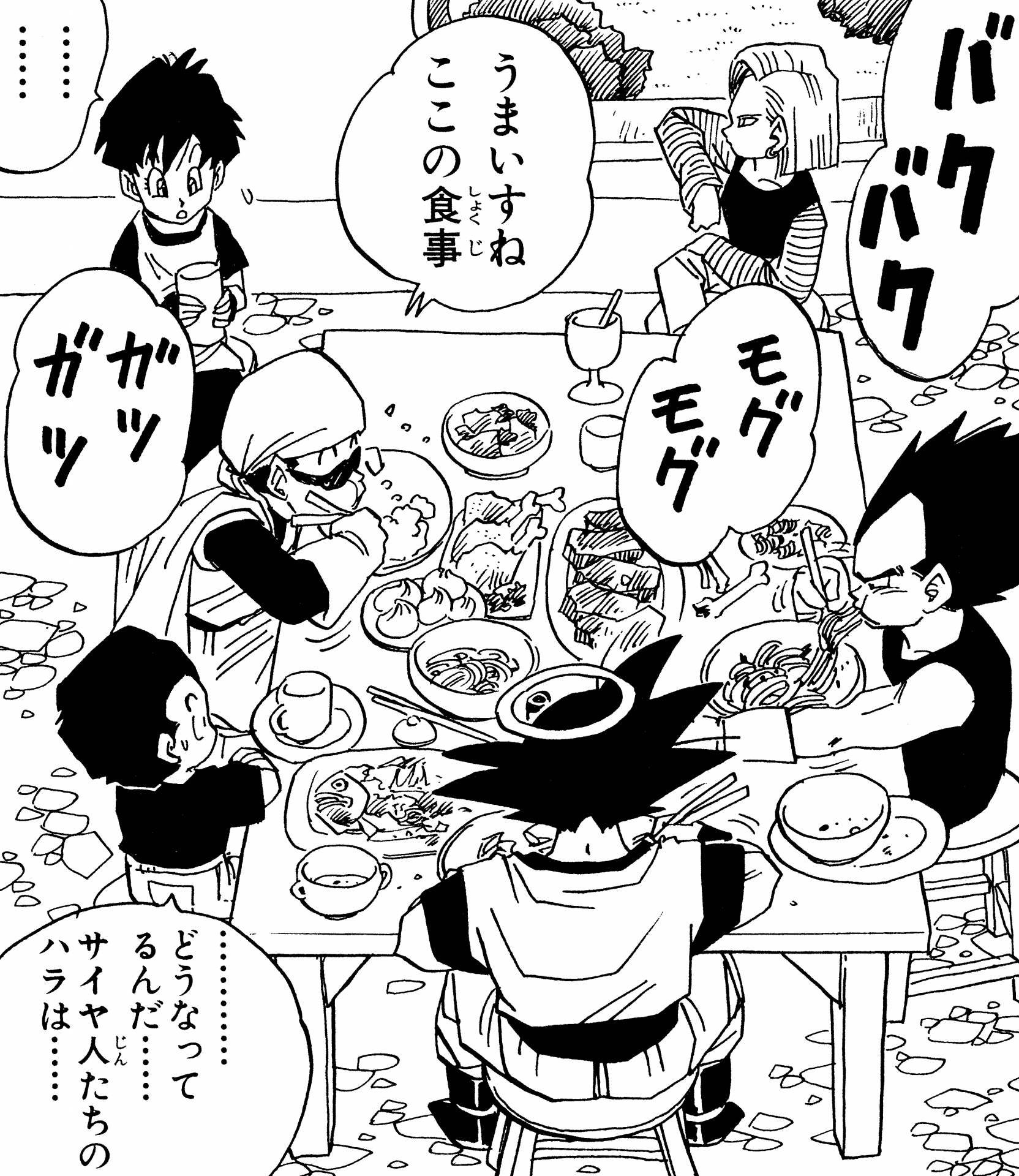 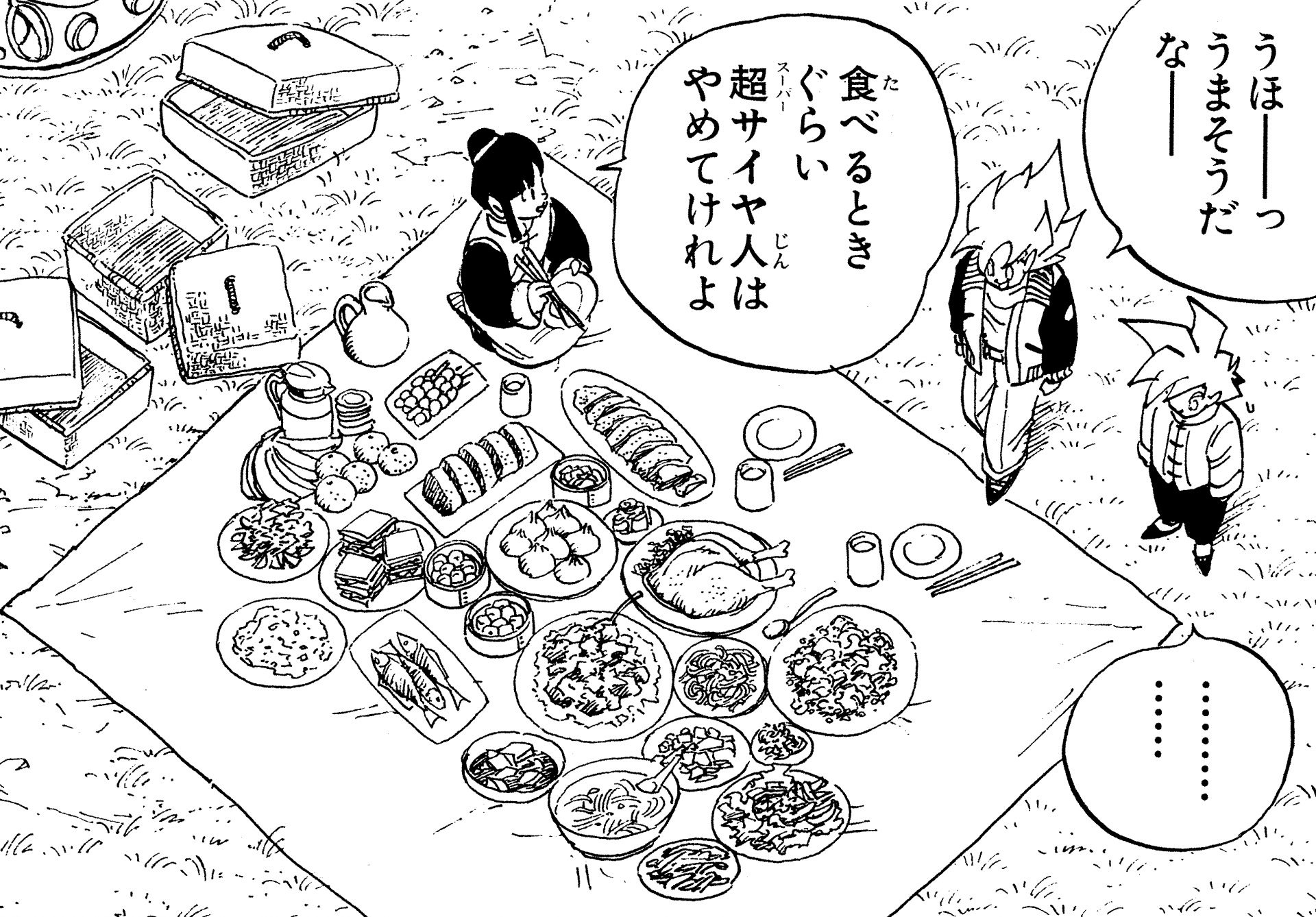 One thing Dragon Ball is famous for is scenes where characters delightfully gobble down mountains of food in a single sitting. This is particularly true for Saiyans like Goku, Gohan, and Vegeta, whose incredible eating habits are about as different from regular humans as their power levels are! An example of this was after the 21st Tenkaichi Budokai, when Goku ate the equivalent of 50 people's worth of food at a restaurant, racking up a bill of 470,000 Zeni and using up almost the entirety of Kamesennin's prize money from winning the tournament while disguised as Jackie Chun.

So, feeling hungry yet? Just looking at some of these scrumptious scenes can be enough to get your stomach rumbling! And keep this in the kitchen, but Akira Toriyama himself says that the greatest cooks in Dragon Ball are actually Yamcha and Gyumao!

This article was just the first serving, so stay tuned for seconds!