After completing their training in preparation to stop "The Zero Mortal Project", Goku and Vegeta clash once again with the Crimson-Masked Saiyan! The villain calls forth many of the Kings of Destruction, and our heroes are shocked to find the likes of Broly and blast-from-the-past Uiro among them! The Pseudo Universe will be shaken to its core with this climactic battle that will put an end to the New Space-Time War once and for all! Don't miss it!

In the Sub Age's "Episode of Bardock" arc, the spotlight is on Goku's father, Bardock, as he faces off against a villain making their diabolical debut in Super Dragon Ball Heroes—Chilled!
Their battle has been recreated and taken to the extreme, so dive into the Sub Age and relive Bardock's heroic defiance against Chilled and his other foes!

There are 3 new SEC cards in this set.
The immortal body evolves even further beyond! Super Saiyan Rosé Full Power Crimson-Masked Saiyan descends!
To keep up with the villain's final form, the strongest fusion warrior has just gotten stronger! Gogeta: BM (SSGSS Evolved) arrives!
And finally, the long-awaited SEC version of Gogeta: GT is here! Experience his unfathomable power through his abilities and awesome animations! 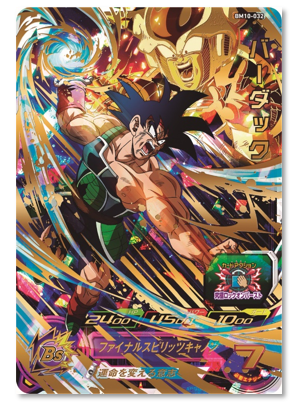 There are 10 UR cards in total.
Gogeta: BM arrives alongside King of Destruction versions of powerful villains like Super Yi-Shinron and Broly!
The Sub Age also brings Bardock with card art and animations that take the impact of the original anime and crank it up to the max!

The superpowered version of CAA "Lock-On Burst", "Ultimate Lock-On Burst", is here!
Lock onto your enemies and unleash your awakening burst upon them!

"Assault of the Kings of Destruction" Campaign Cards

Big Bang Mission 10 also features "Bardock's Final Showdown Bonus Chance!!".
This is a campaign to celebrate the commencement of the "Episode of Bardock" arc where you can get special UR cards! And since Bardock is the star of the show here, he'll be appearing with a special foil style that's never been used before in SDBH! Get your hands on this card with its incredible artwork featuring the man himself and his squad of veteran Saiyan warriors!
Campaign Period: From Thursday, September 16, 2021, until all prizes are won. 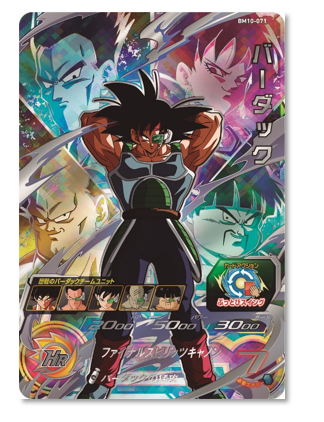