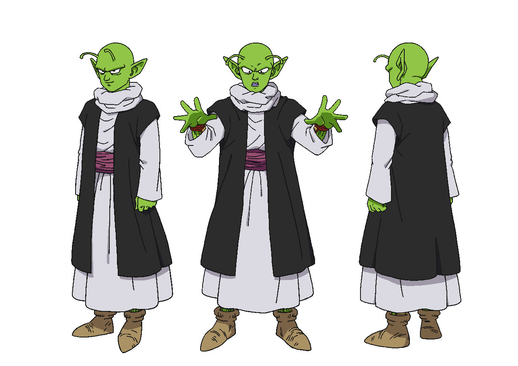 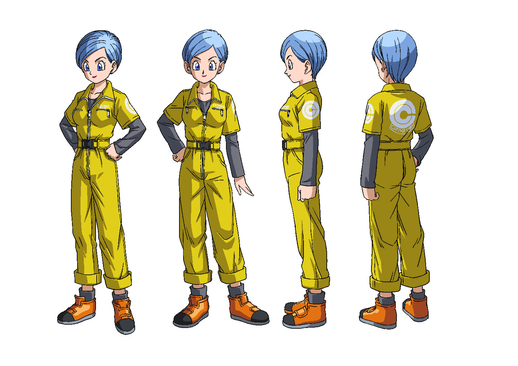 First off, take a look at these amazing character designs put together by the production team! We have Dende, who looks to have grown a little since the last time we saw him in the "Dragon Ball Super" anime, and Bulma, who, judging by her outfit, is geared up for some work!

Being that Toriyama is contributing enormously to this new movie on all fronts, it's no surprise he had a hand in Karin's character design! The cat hermit is looking cuter than ever with his purr-fect proportions, fluffy fur, and feline facial expression.

And finally, we also got a peek at some actual footage from the new movie! We were able to get a decent look at some new characters, but...what's with all the "RR" logos around and on their badges?!
The names of the two enigmatic figures bearing the numbers "1" and "2" on their chests were also revealed to be "Gamma 1" and "Gamma 2"! We'll have to wait and see what kind of role they'll play in the movie's plot!
The footage also contained an appearance by two characters Mr. Iyoku said would play a large role in the story—Piccolo and Pan! Their character designs for the movie were revealed during the last panel discussion back in July, but for those of you that missed it, you can check them out on the movie's official website!

We were also lucky enough to receive special messages about the new movie from Masako Nozawa and Toshio Furukawa, the Japanese voices of Goku and Piccolo respectively!

Q. What kind of role will Piccolo play in the new movie?

Toshio Furukawa: Well, what I can say for sure is that Piccolo plays a fairly large role in this one. He shares a lot of his screentime with Pan, actually, and it's almost like he's a grandfather taking care of his beloved granddaughter. Aside from that, there are also times where he acts as kind of a mentor. Overall, I had a great time playing Piccolo again this time around.

Q. Do you have a message for all the fans in New York?

Masako Nozawa: I want to tell Dragon Ball fans all around the world that this new movie, "Dragon Ball Super: SUPER HERO", is surely something that will go completely above and beyond all of your expectations. And so, I urge you to please keep looking forward to it while it's being finished up! "An' make sure ya go and see it, 'kay? Just sit tight and stay pumped!"

We collected questions to ask at the discussion panel from you, the fans, over at our Twitter account for the Official Site. Thanks to your amazing response, there were too many for Mr Iyoku and Mr. Hayashida to get through all of them, but we had them answer as many as we could!

Q. The Dragon Ball Super anime connects the story with the last chapter of the manga, but what about this movie?
Is it a continuation from the end of the manga?
I love Akira Toriyama's Dragon Ball manga, so I'd be really happy if the story is connected.

Mr. Iyoku: Dragon Ball Super is a story take place in the climax time era of the Dragon Ball manga, which covers the period 10 years after fight of Goku and Majin Buu. This story is written by Toriyama-sensei, naturally it is connected to Dragon Ball.

Q. Could you tell us what period this movie is set? After the Granolah Arc but before the 28th Tenkaichi Budokai / World Tournament?

Mr. Iyoku: Thank you for reading the manga which is just out now. The Granolah Arc is still taking place in the recent chapters, so I'd like to avoid spoilers, but the new movie takes place after the BROLY movie but before the 28th Tenkaichi Budokai / World Tournament.

Q. Please tell us the release dates for the Japan and the U.S release.

Mr. Hayashida: We've already determined the Japan release for 2022, on the other hand, we're still under negotiation for the date for the U.S. However, I really wish to launch it as close date as Japanese release. Please allow us for a little bit more time for further information!

Q. I'd love to know the address for Piccolo's house. I'll send him a letter.

Mr. Iyoku: Right, at San Diego, we showed that Piccolo's house has a mailbox, didn't we? So, that's where it'd go if you wrote to him.
There are still many, many things for you to see in the movie, so definitely look forward to it. 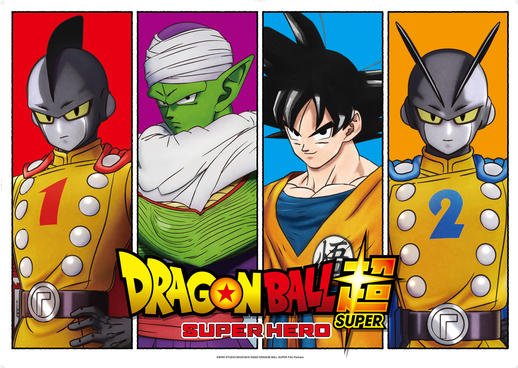 Lastly, a new visual was unveiled featuring the movie's additions to the Dragon Ball roster, Gamma 1 and Gamma 2, as well as Piccolo and Goku all lined up! Mr. Hayashida noted that the theme that they wanted this art to portray was "POP", and the end result was this slick and stylish visual to treat our eyes with!

New York Comic Con will continue until Sunday, October 10th, in local US East Coast time at the Javits Center.
We'll also be running a feature article on the NYCC Dragon Ball Booth in the coming days, where you can hang out with a gigantic Great Ape Vegeta statue! That's all for now, see you then!