On Sale Now! Get All the Latest Info on Dragon Ball Games, Manga, and Goods in the Jam-Packed V Jump Super-Sized December Edition! 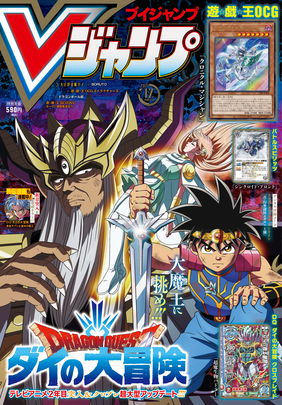 In the smash-hit "Dragon Ball Super" manga, more secrets about the Saiyans' past assault on Planet Cereal will be revealed! Just what happened between Bardock and a young Granolah all those years ago?!

All the Latest Info on "Dragon Ball" Goods and Games!

"Super Dragon Ball Heroes" will be celebrating the 11th anniversary of the Dragon Ball Heroes series with Big Bang Mission 11, and V Jump has all the info you need in a massive feature section! Along with news regarding a certain version of Goku making his card debut, there's also info on three different campaigns and much more!
In the "Dragon Ball Z: Kakarot + A New Power Awakens Set" feature, prepare for a rundown on some of the game's substories!
As for "Dragon Ball Legends", you'll get an introduction to new character "Piccolo (Fused with Nail)" and his Special Arts & Special Move!
And finally, everything you need to know about the Halloween events set to hit "Dragon Ball Z Dokkan Battle" is here!
There's a whole ton of hot news in this one, so be sure to pick up your copy of V Jump's super-sized December edition when it hits shelves on Thursday, October 21st!