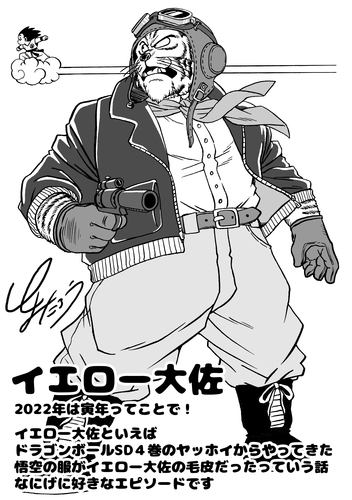 Colonel Yellow
2022 is the Year of the Tiger!
Speaking of Colonel Yellow, the part in Dragon Ball SD Vol. 4
where Goku came to Yahhoi and the clothes he was wearing
turned out to be Colonel Yellow's pelt was unexpectedly funny.
――Toyotarou

This is a special monthly series where we feature sketches drawn by Toyotarou from V Jump's ongoing series Dragon Ball Super!
The first illustration of the year is Colonel Yellow!

Colonel Yellow is a member of the Red Ribbon Army who sought to attack Bora, the guardian of Karin Sanctuary, and steal his Dragon Ball. He even went as far as to take Bora's son, Upa, hostage in his despicable plot, but in the end, he was taken out by a devastating punch from Goku.

Volumes 1 to 7 of Dragon Ball SD, mentioned by Toyotarou above, are currently on sale in Japan! Video versions of each chapter are also being regularly posted on Saikyo Jump's official YouTube channel, starting with volume 1, so be sure to check them out!
Watch chapter 1 below!