To celebrate Saiyan Day, which was on March 18, we'll be releasing a couple of articles talking about a whole host of Saiyans from the app game Dragon Ball Legends ("Legends" herein). Starting off, this article will cover Goku and his various Super Saiyan incarnations, each with their own strengths, weaknesses, and abilities, so that you can deepen your knowledge of them and enjoy playing with them even more! 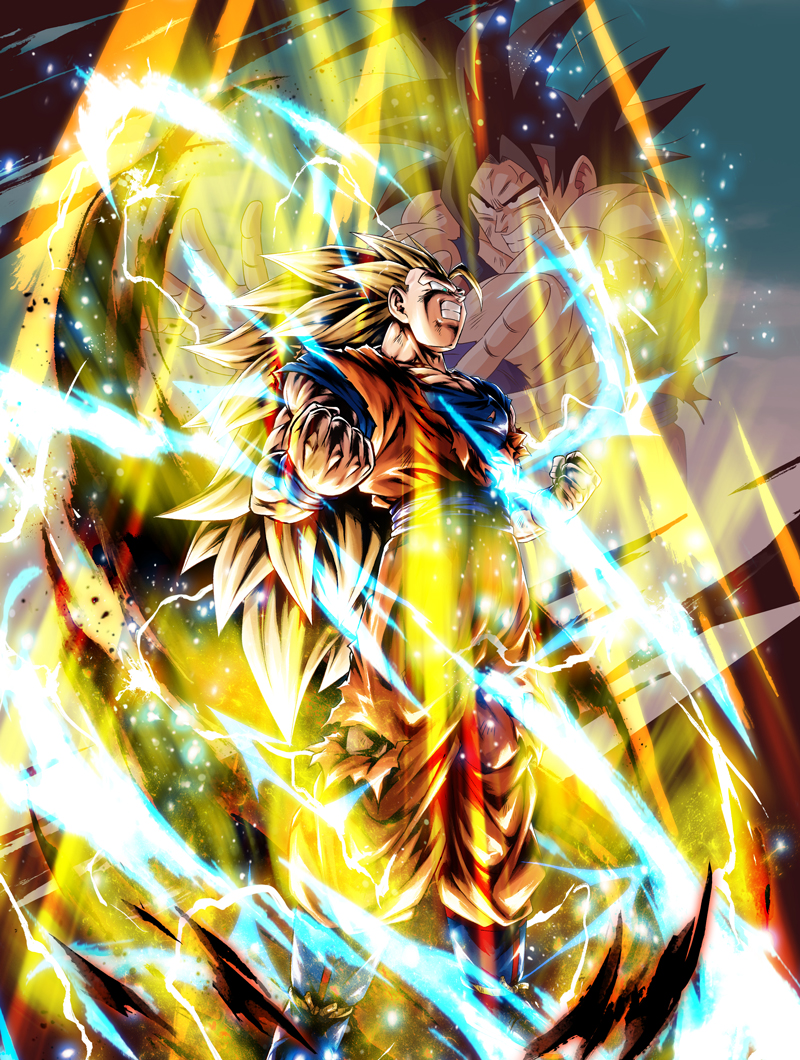 Super Saiyan 3 Goku
Main Ability: "Good luck, Kakarot..."
Draws the Ultimate Arts Card "Super Spirit Bomb", which can deal massive damage to the enemy, and at the same time restores his Ki by 20 and his health by 30%.

We first saw Goku turn Super Saiyan 3 during his fight against Majin Buu, and it's instantly recognizable thanks to the long hair, which goes down to his waist, and the lack of eyebrows.

One aspect of this character to pay extra attention to in Legends is his LEGENDARY FINISH, which is a special animation that plays when he defeats an enemy under certain conditions.

It recreates the moments where Goku gathers energy for a Super Genki-dama, uses it to defeat Majin Buu, and gives Vegeta a thumbs up. These scenes originally took place from episode 284 to 286 of the Dragon Ball Z anime during the Majin Buu saga, but those 3 episodes have been condensed into an action-packed, 25-second LEGENDARY FINISH.

And we haven't even mentioned the fact that Goku also tears off his uniform and deactivates Super Saiyan 3 before preparing the Super Genki-dama! This is an animation completely original to Legends that goes to show just how committed the development team are.

The thumbs up Goku gives when he wins perfectly matches the original framing of the show, so that the player gets to feel like they are looking up towards him from Vegeta's perspective. 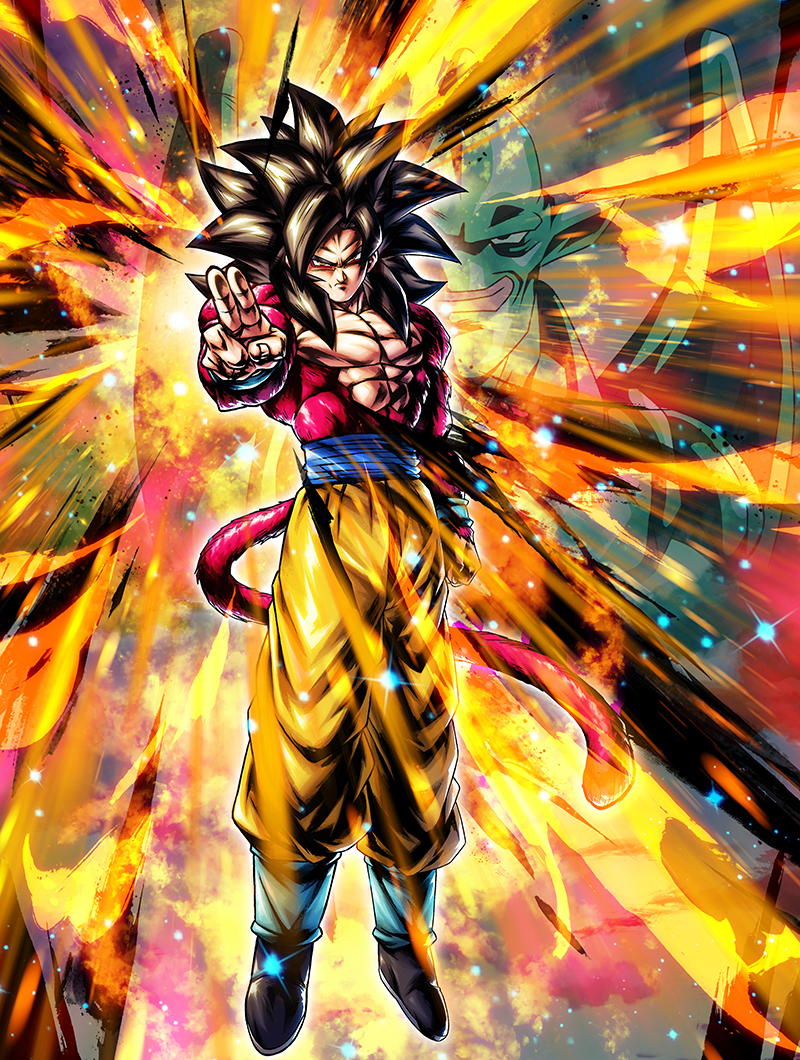 Super Saiyan 4 Goku
Main Ability: "I'll finish it!"
Draws the Ultimate Arts Card "Dragon Fist of Rage", which can deal massive damage to the enemy, and at the same time restores his health by 30% and his Ki by 40 while increasing his damage inflicted by 30% for a short period of time.

This form was first demonstrated by Goku and Vegeta in the Dragon Ball GT anime during the Shadow Dragon Saga. It draws upon the Great Ape power that resides within them, which brings about a noticeable change to not only the way Goku looks but how he speaks and his personality as well.

Even in Legends, Goku's normally upbeat voice lines and bright expressions during battle become cool, calm, and collected in his Super Saiyan 4 iteration.

In addition, his Special Move Arts "Lightspeed 10x Kamehameha" is a recreation of the scene where he fires off a Kamehameha against Si-Shinron while moving at insane speed. It's truly an attack that's only possible thanks to the Great Ape power that Super Saiyan 4 provides. 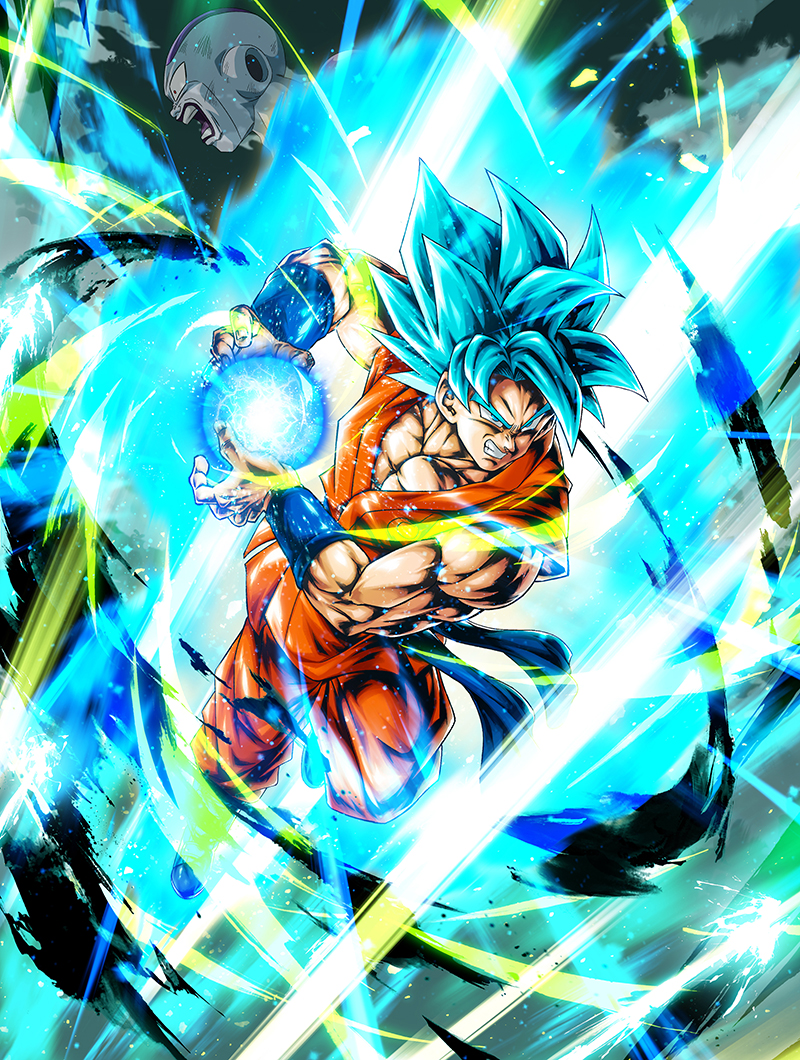 Super Saiyan God SS Goku
Main Ability: Clash of Flawless Power
Restores his health by 40% and reduces the next damage sustained by 20% (applies until enemy combo is finished).

In Legends, this character, much like Goku in the original series, puts his whole body into his Strike and Blast attacks. His animations provide a great contrast to Super Saiyan God SS Vegeta, so be sure to try pitting them against each other and note the differences!

When this character isn't attacking, he'll assume his standby pose, which depicts him taking a fighting stance with the thumb, pointer, and middle fingers of one hand slightly curled and held out in front of his body, which is exactly the same pose that Goku can be seen taking in Dragon Ball Super.

If he performs a cover change (switching in for a party member who's being attacked), he'll decrease the enemy's Vanishing Gauge (required to evade attacks) to 0 and reduce the amount of damage he receives by 20% until the enemy's combo finishes, so he's a fantastic character to use whenever you're in a tight spot.

Super Saiyan God SS Kaioken Goku
Main Ability: Extreme Power of Body and Soul
Draws the Ultimate Arts Card "20x Kaioken God Kamehameha", which can deal supreme damage to the enemy, and at the same time restores his health by 30% and his Ki by 40 while cancelling his own attribute downgrades and abnormal conditions. Plus, applies the buff effect "Nullifies enemy's special actions that activate when changing cover" to himself for 30 timer counts.

From the Universe Survival Saga of the Dragon Ball Super anime, this form gives us a glimpse at how much power can be unlocked when one who has reached Super Saiyan God SS (also known as Super Saiyan Blue), draws upon the power of Kaio-ken, manifesting as a red aura on top of Super Saiyan God SS's blue aura.

At the start of each battle in Legends, a special cutscene will play that shows Super Saiyan God SS Goku activating Kaio-ken. In order to recreate this character from the anime as faithfully as possible, it's not just the color of his Ki that changes, but his skin will also take on a shade of light pink.

For his Ultimate Arts, "20x Kaioken God Kamehameha", he unleashes a barrage of Ki blasts from all directions before firing a devastating Kamehameha from behind his opponent. It's a frenetic attack that really captures Goku's fight against Jiren in the original series while also being distinctly Legends in flavor.

And also be sure to pay attention to the special animation that plays when you acquire him! As is unique to ULTRA-rarity characters, this Goku is accompanied by a high-impact, ink-drawing style animation upon being obtained. 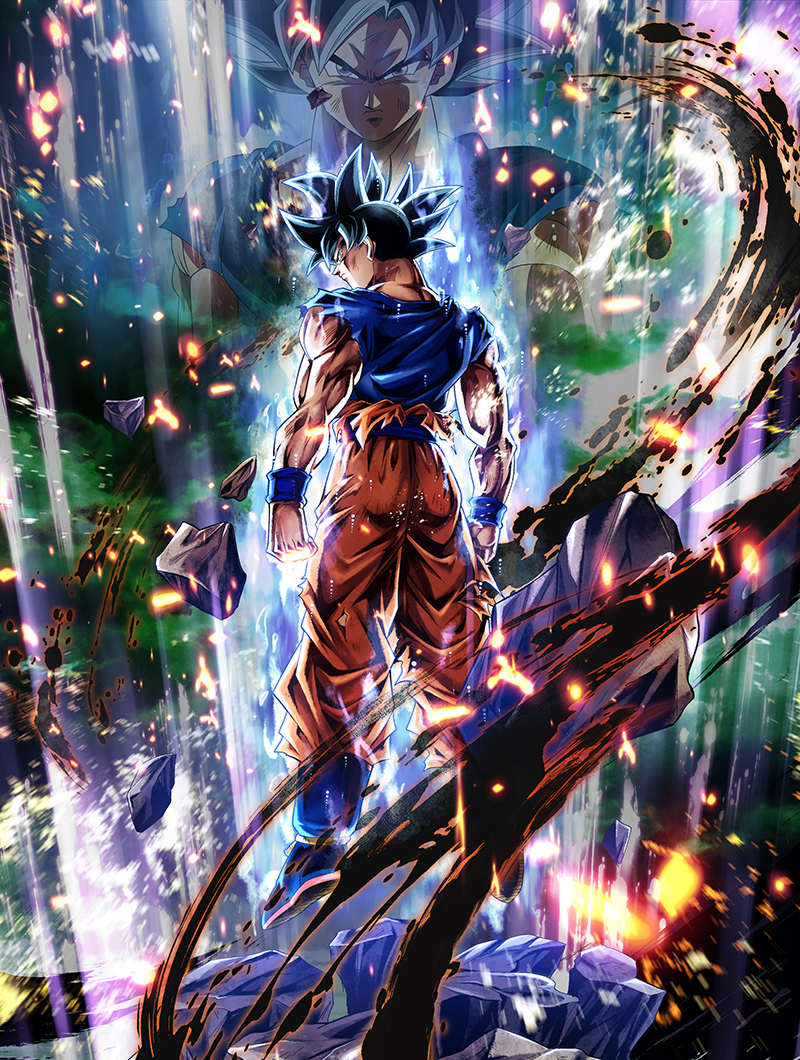 Ultra Instinct -Sign- Goku
Main Ability: "You cannot stop me now..."
Draws the Ultimate Arts Card "Autonomous Assault", which can deal supreme damage to the enemy, and at the same time restores his health by 30% and his Ki by 40 while cancelling the enemy's attribute upgrades.

From the Universe Survival saga of the Dragon Ball Super anime, this form is an incomplete version of the Ultra Instinct technique used by the gods, but it cannot be held for long due to its imperfect nature. It's characterized by a blue and white aura that surrounds the user's entire body.

In Legends, Ultra Instinct -Sign- Goku has a unique mechanic that allows him, under certain conditions, to automatically evade any Strike or Blast attacks that come his way. It's a fantastic representation of the mental state that Ultra Instinct puts its user in, where their body can automatically and instinctually react to any threat.

This form also offers another side to Goku that differs from both his usual innocent demeanor as well as the harshness of Super Saiyan 4, instead becoming more quiet and serene, which is shown through his in-game expressions and voice lines.

Plus, this character features animations that perfectly recreate Goku's movements in the anime down to the finest detail. In particular, his LEGENDARY FINISH depicts the glint in his eye before he fires off a Kamehameha in his fight against Kefla, and it even shows the final blast from 3 separate angles, just like in the original series.

Stay tuned for our next Saiyan Selection, where we'll be focusing on the characters who came to be known as rivals to Goku, starting with Vegeta!