The Story Behind the Abilities and Animations! Dragon Ball Legends Saiyan Selection - Rivals

To celebrate Saiyan Day, which was on March 18, we're releasing a couple of articles talking about a whole host of Saiyans from the app game Dragon Ball Legends ("Legends" herein). Continuing on from the Goku feature article last time, today we'll be covering some of Goku's rivals as well as one or two other famous Saiyans! Super Saiyan God SS Vegeta
Main Ability: The Status of a God
Draws a Blast Arts card, restores his Ki by 30, and gives him a damage buff.


This unit comes from Vegeta's transformation in the Resurrection F Saga of the Dragon Ball Super anime. The form resulting from a Super Saiyan God turning Super Saiyan, SSGSS is characterized by blue hair and pupils—a unique appearance that gave rise to the nickname "Super Saiyan Blue".

In Legends, his Strike and Blast attack animations have been carefully designed with Vegeta's fighting style in mind, being dexterous, efficient, and refined. These aspects of his character are even more apparent when juxtaposed with those of Super Saiyan God SS Goku, so try to have them battle in-game and see the differences for yourself! This Vegeta's model also features the grey battle armor that he was shown wearing in the Dragon Ball Super Resurrection F Saga and other fine details that fans will appreciate.

Super Saiyan God SS Vegeta also has a Unique Ability that restores his health by 5% and Ki by 10 every time he uses a Strike or Blast Arts card. Since he's able to continuously heal during battle, he's a great character for beginner players who want to enjoy longer battles.

Super Saiyan Broly
Main Ability: Awakened Menace
Draws his Ultimate Arts card, "Gigantic Explosion", which can deal massive damage to his opponents, and also restores his Ki by 50 and gives him a damage buff.

Specifically, this unit is the Broly from "Dragon Ball Z: Broly – Second Coming", which you might've been able to tell from the wide variety of offensive means he uses in battle, including massive punches, grapples, and Ki blasts. If you pay attention to his Strike Arts animation in Legends, you can really feel the weight of each one of his hefty blows as he pounds away at his opponent. His other attack animations also carry that same sense of weight to portray his prodigious size, especially when compared to other characters like Goku and other Saiyans.

He has a Unique Ability that gives him a +30% damage boost against enemy "Tag: Son Family" units, which pays homage to his obsession with Goku in the movie and the fierce battle he had against him and his sons, all the while constantly shouting, "KAKAROT!!"

For his Ultimate Arts, the camera pulls back to show Broly in the air above his opponent to highlight and emphasize the sheer scale and power of his most destructive attack—one that only the Legendary Super Saiyan himself is strong enough to pull off. 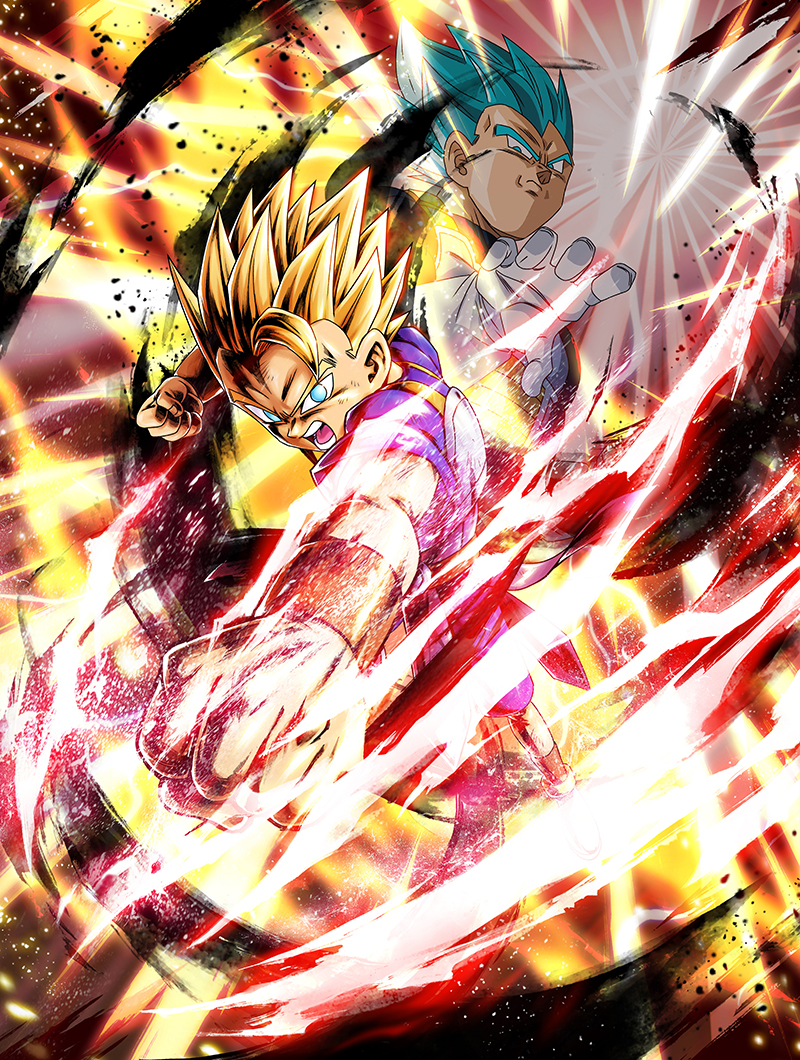 Super Saiyan Cabba
Main Ability: Awakened Pride
Restores his own health by 35% and nullifies attribute downgrades and abnormal conditions for his whole team.

Cabba is a Saiyan from Universe 6's version of Planet Sadala who debuted in the God of Destruction Champa Saga of the Dragon Ball Super anime. In stark contrast to the Saiyans of Universe 7 like Goku and Vegeta, Cabba is mild-mannered, humble, kind, and earnest, and carves out an honest living by taking down bad guys for pay. He first transformed into a Super Saiyan during his bout against Vegeta in the martial arts tournament held between Universes 6 and 7.

In Legends, Super Saiyan Cabba has a Unique Ability that gives a Strike damage buff to allied Vegeta characters and other Universe 6 characters upon being switched to standby, which is a reference to the way he sees Vegeta as a mentor-like figure in the series.

He also has a voice line in the game that plays when he wins where he says, "Look, Master! I did it!" which is another reference to Vegeta and their master-student relationship. 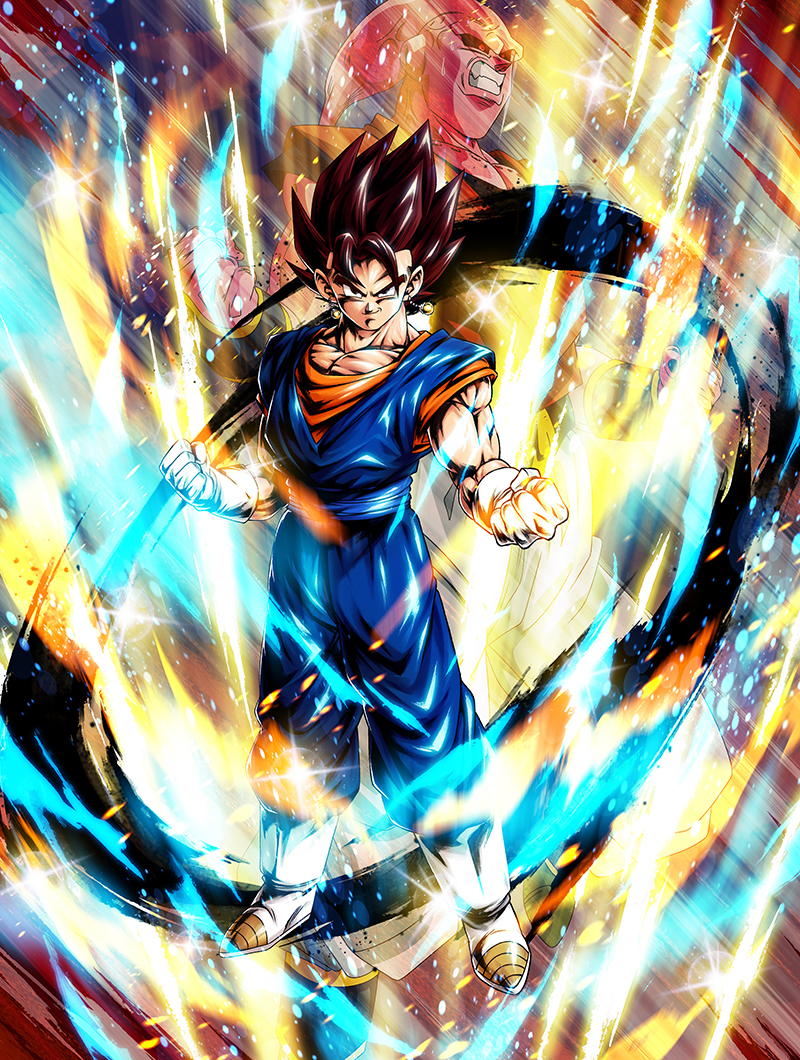 Vegito
Main Ability (Pre-Transformation): "Would you like a demonstration?"
Allows Vegito to transform in to Super Vegito while destroying the remaining cards in your hand and drawing four new ones.
Main Ability (Post-Transformation): "This is Super Vegito!!"
Draws his Special Move Arts, "Spirit Sword Rush", which can deal massive damage to opponents, and also restores 50 Ki and completely refreshes his Vanishing Gauge.

Vegito is the Fusion resulting from Vegeta and Goku ("Kakarot" being used for the Fusion name) using the Supreme Kai's Potara Earrings, who first appeared in the Majin Buu Saga of the Dragon Ball Z anime.

It's probably fair to say that all Dragon Ball fans have wanted to be able to transform like their favorite characters at some point in their lives, and characters like this Vegito allow them to experience the next best thing by transforming mid-battle! Vegito and Super Vegito even have a different set of animations to set them apart. For example, his swipe dash after transforming has Super Vegito crossing his arms, and his evade animation is more agile and gives him a thinner profile as he turns more to the side. These differences make the transformation feel even more significant, and the extra power and confidence he gains is manifested visually for players to enjoy.

His Strike Arts employ Vegito's trademark high-speed attacks and plenty of kicks, and he also taunts his opponent when using his Special Arts and smirks after landing his Ultimate Arts. These are all aspects of the character that have been included in his in-game design to capture Vegito's cool, antagonistic personality. 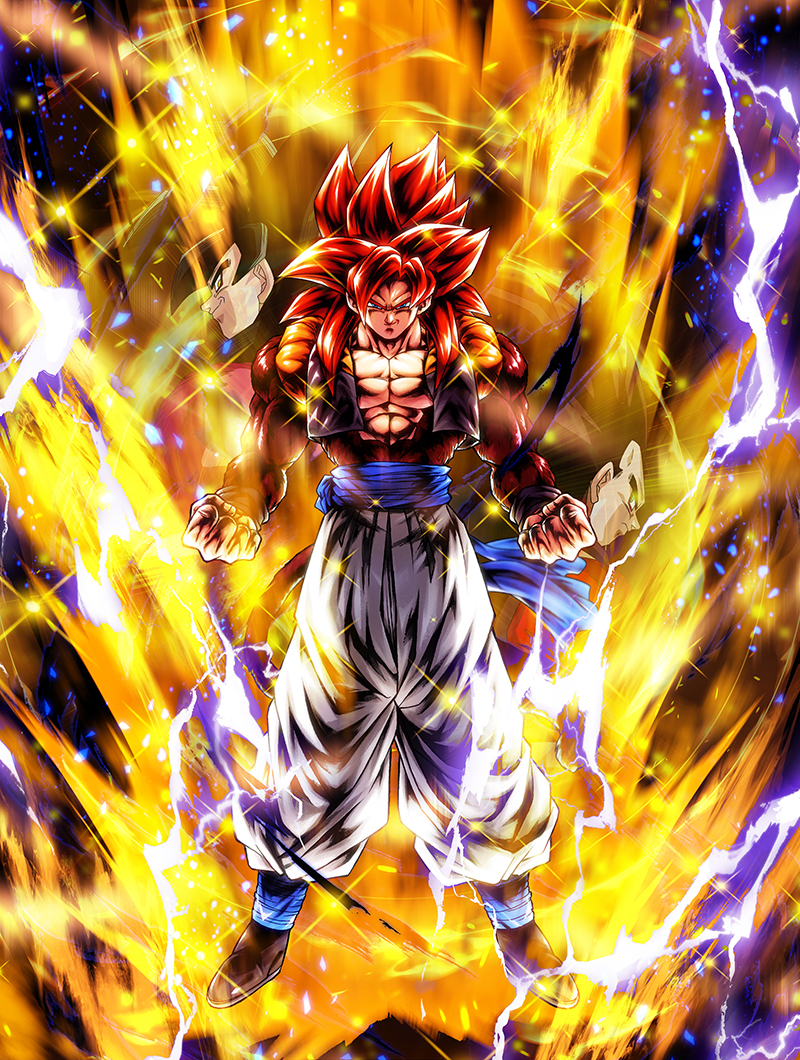 His animations in Legends are based on his battle against Super Yi-Shinron in the anime and are intended to show off his playful and cocky personality that comes from his incredible power.

His LEGENDARY FINISH animation shows off what becomes possible when you take the immense power of a Great Ape that's granted by Super Saiyan 4 and remove the downsides of the Great Ape form itself, resulting in a lightning-fast and incredibly destructive attack. He starts off with some agile movements and strikes before transitioning into a 100x Big Bang Kamehameha, combining elements of the scenes from the original series as well as new additions to create a supremely cool animation that no fan would want to miss!